When you’re ready to sign on the dotted line for that used car you’ve been eyeing, you might pause momentarily amid the excitement to ask yourself: Did the dealership really tell me everything?

With data processed by Recall Masters, we looked at all the used cars available for sale in the United States on a single day (955,368) and found that more than 36,000 had recalls. That’s a LOT of used cars that sellers are passing on to an unsuspecting consumer! In this environment, staying informed about the state of the industry is a great way to protect yourself from less-than-transparent dealers.

We found that southern hospitality didn’t extend to used car sales – Georgia leads in the number of dodgy cars sold, with more than 40 recalls per 100,000 residents. Georgia’s only mention of recalls on itsDepartment of Law, Consumer Protection Unit website is a link to a database where consumers can research recalls. In Georgia, there’s no law on the books against dealerships selling these cars to consumers, which puts buyers and sellers at odds rather than encouraging them to work together for their mutual benefit.

In 2014, New York City took a different approach, making it illegal to sell a car without fixing or addressing a recall first. This offered New York consumers additional peace of mind when purchasing a car. The State of Massachusetts is another place working to protect consumers from dealerships and “as-is” sales,transitioning ownership of repairs – even after the sale – to the dealer. AutoNation actually puts up to 15 percent of its used car inventory aside daily and makes those cars ineligible for sale until their recall issues have been addressed. 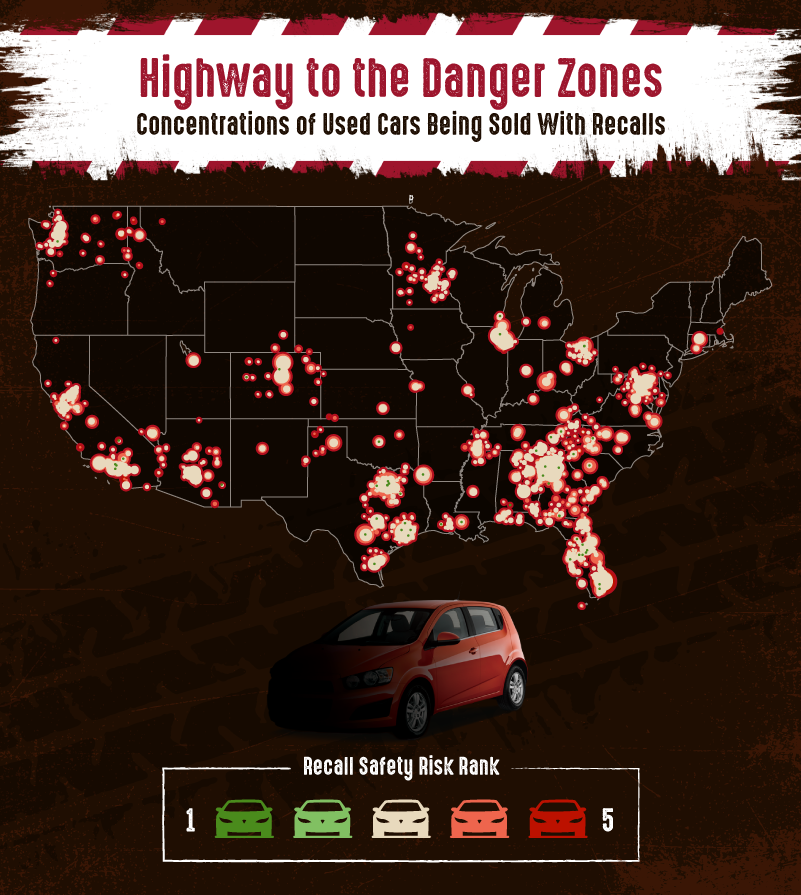 Given that Georgia leads in the number of recalled cars sold per 100,000 residents, it’s no surprise that it also is home to some of the highest concentrations of used cars with dangerous recalls. We ranked these recalls on a scale from 1 to 5 (with 5 being the most dangerous).

It seems Florida is earning its “Sunshine State” title. When the data is plotted with moderate and severe recalls that need to be addressed, it’s almost difficult to look at Florida because it’s so bright. We also see pockets radiating around the country – in California and Texas, for example – while the Northeast sees much fewer instances of these issues.

It’s often these fatalities that spur the National Highway Traffic Safety Administration to research and mandatemanufacturers to recall vehicles for life-threatening problems.

Year of the Recall 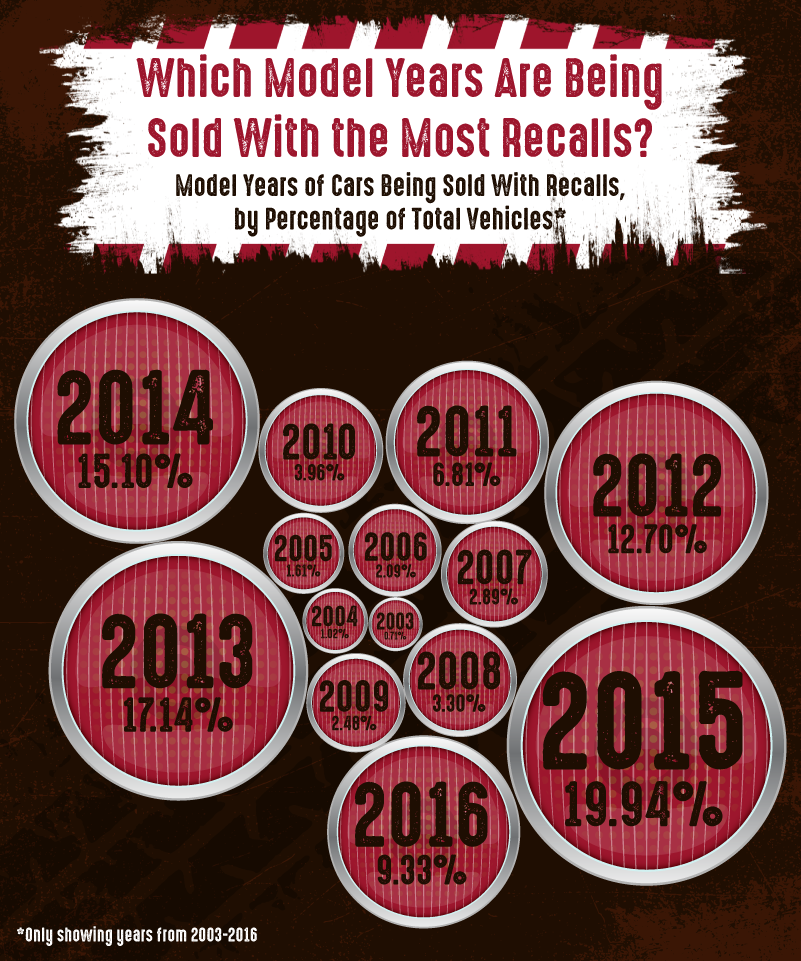 Recalls aren’t just a concern for cars of a significant age; they also come into play for newer cars. In fact, 2015 models represent the largest number of used cars with recalls (almost 20 percent). Almost 75 percent of the recalled vehicles we examined were 2012 models or newer. This situation might be because newer cars could have had only two owners – one who never read the letter about the recall and a [seller] dealership that didn’t properly investigate and address it. 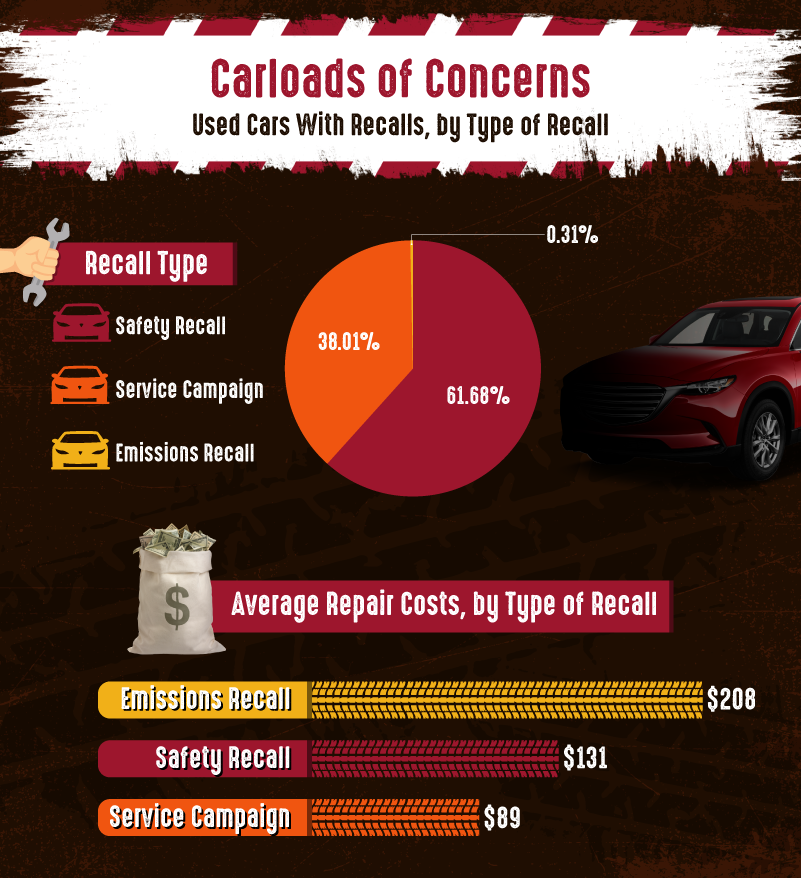 Of the 36,105 used cars for sale with active recalls, almost 62 percent had an active safety recall that required attention. Dealers who sell these cars are putting their customers in jeopardy by not doing the necessary research to ensure their clients receive vehicles free of safety concerns. In 2015, one consumer died when an airbag improperly deployed, revealing that consumers who are unaware of their vehicles’ recall issue could pay the highest price possible. 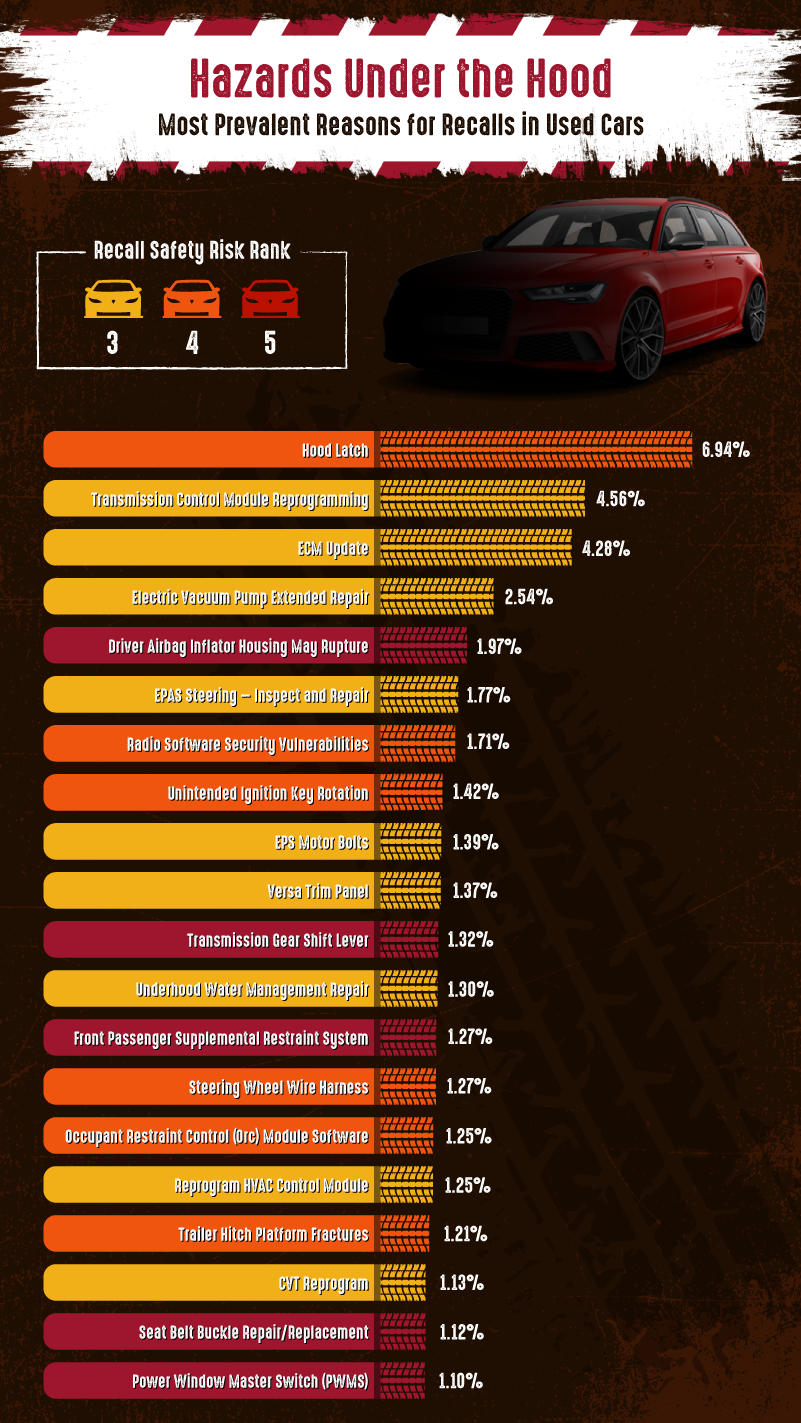 You might be speeding through paperwork to get the keys to your used car, but remember that your new-to-you car might have an active recall – most likely, a faulty hood latch. Such a problem might look small on paper, but having your hood fly up without warning while you’re driving down a busy highway would be downright dangerous. These types of recall issues represent just under 7 percent of the active recalls we found in used cars sitting on dealer lots across America. Without a trusted used-car partner investigating this inventory, you could end up with one of these lemons sitting in your driveway. 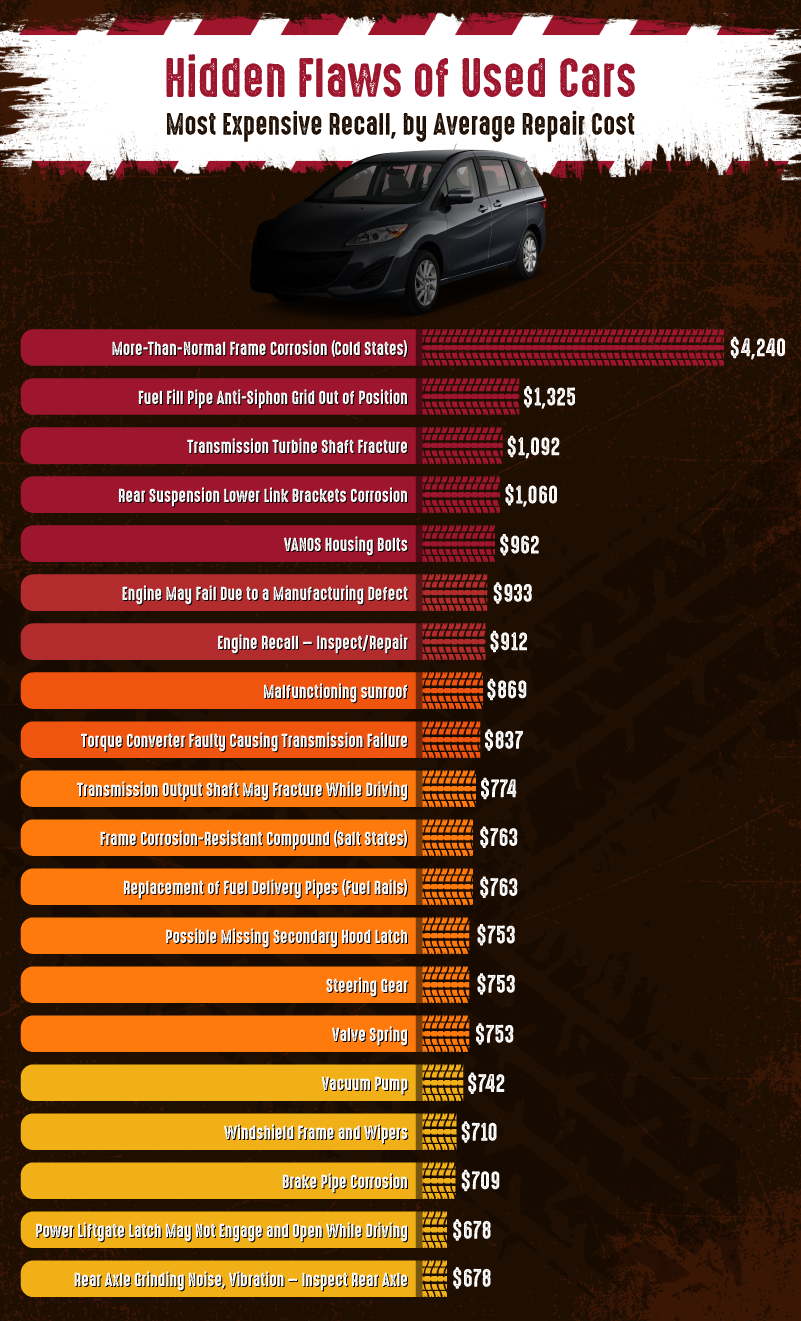 Buying a used car should be a great experience – in the best-case scenario, you’re getting a dependable vehicle at a friendly price – but it can quickly become your worst nightmare if the dealer has passed on an undisclosed recall to you. The necessary repairs could cost you hundreds or thousands of extra dollars, and you’ll have to deal with the annoyance of car repair impacting your daily routine.

We found cars with frame corrosion recalls being actively sold at dealerships. This repair could saddle an unsuspecting buyer with $4,240 in hidden costs. We also found three other repair issues – fuel fill pipe anti-siphon grid out of position, transmission turbine shaft fracture, and rear suspension lower link brackets corrosion – that all had repair price tags of $1,000 or higher.

If you believe that these recalls are limited to lower-end models, you are mistaken. When examining all of the used cars for sale on dealership lots, we discovered several vehicles priced anywhere from $75,000 to $279,000 with recalls. These cars, if purchased, would bring undue risk to the buyer.

Of these top-20 luxury cars, almost half were located in California and Texas. While these numbers don’t serve as an indictment of used car quality in those states, they do serve as a reminder to consumers to work with reputable dealerships that take a fine-toothed comb approach to uncovering hidden issues.

Your car is not just a means of transportation – it’s a vessel that carries you and your hopes and dreams, whether it’s taking you to your dream job every morning or bringing your family on a much-anticipated summer vacation.

Overlooked recalls in the used car market could potentially translate into large, unexpected repair costs that also rob you of your most precious resource: time. Buying from a trusted dealership with thorough checks can protect you from this outcome. AutoNation is one of the few car dealers with a recall-free policy for new and used-cars. The commitment not to sell vehicles with a recall is not without cost, as adequate parts are not always available, and AutoNation must hold the vehicles in inventory until repairs are completed. AutoNation insists that your protection is worth the added cost, letting you focus on enjoying your ride while they take care of the recall research.

Using data from Recall Masters, we analyzed all of the used cars for sale in America on a single day (955,368 total cars). We then analyzed how many of these cars had recalls (36,105). There was no data available for the following states: New York, Vermont, Maine, New Hampshire, Rhode Island, North Dakota, South Dakota, and Iowa.

We encourage you to use the images above (UNALTERED) and steer them into your content. But please pump the brakes first and link back to Autonation.com, so you don’t drive away with all the credit.

April 29, 2011 Omar Rana Comments Off on Kia recalling Spectra due to issue with gas tanks that could drop to the ground

April 6, 2011 Omar Rana Comments Off on Mercedes-Benz recalls 41 2011 E-Class models for a small but significant issue