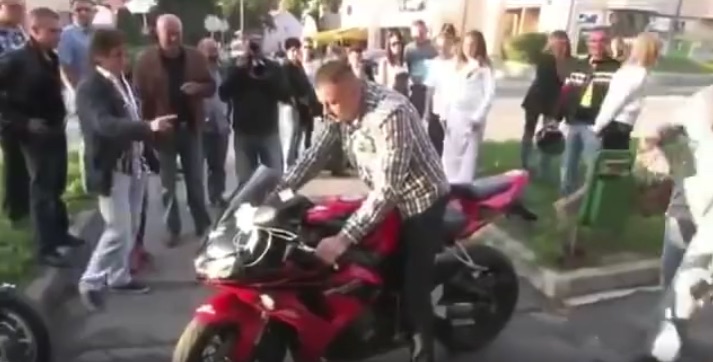 Bikes really aren’t my forte, but I couldn’t really help but realize how much wrong was happening in this video.

There is no specific caption or description, other than the catchy “clickbait-like” statement along the lines of, “WTF was this guy thinking?”

But despite the fact that I don’t do bikes and thus, I don’t know jack shit about them, I still can see that this guy is just failing miserably at trying to attempt a standing burnout on a sport bike.

Not can you only hear him holding the throttle wide open, he’s appears to be riding the clutch instead of dumping it and letting go completely, resulting in him just jerking forward and probably roasting the plate away.

Despite not getting it right the first couple times, he insists on trying, with others chiming in, appearing to tell him that he’s doing it wrong.

But, that’s not even the best part.

Watch what I mean below and just, prepare to laugh. It’s truly a facepalm-worthy video.

March 25, 2015 Chris Chin Comments Off on It’s official – Top Gear’s Jeremy Clarkson is no longer at the BBC w/ video

Audi A3 diesel Super Bowl XLIV commercial: Green Police is coming to get you (w/ video)

February 4, 2010 Omar Rana Comments Off on Audi A3 diesel Super Bowl XLIV commercial: Green Police is coming to get you (w/ video)