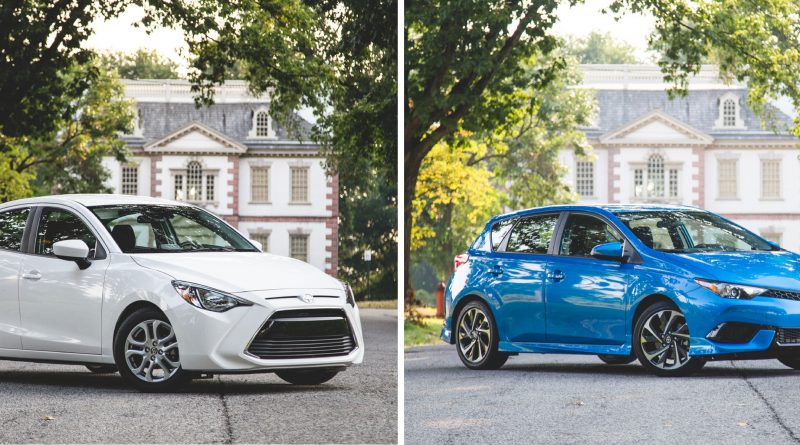 We test drive the latest compacts from Toyota’s struggling youth brand. Are they enough to save Scion from going six feet under?

Scion recently introduced some new compact cars in its lineup to try and breathe some life back into it. They’re called the Scion iA and iM compacts and both are the company’s latest attempts to win back some entry-level market share. As of recent, Scions models have become increasing old and stale. So the brand has clearly exhibited a need for some resuscitation.

Some effort was obviously seen with Scion’s latest adaptation of the Toyota GT-86 sports coupe. It’s one of Toyota’s latest efforts to reignite some sporty performance in a portfolio that had otherwise become no more interesting than a Cuisinart appliance. But an impractical compact sports coupe isn’t for everyone and it’s definitely not the car Scion needs to fatten its pockets.

Making things even more challenging is the fact that Scion’s extremely strapped for cash. So they had to buy the rights to repurpose the latest Mazda2 as the Scion iM, while the iA is a European and Asian Corolla Auris, slightly reworked for the US market.

Are they both enough to win back some youthful and compact car buyers? Read on to find out. 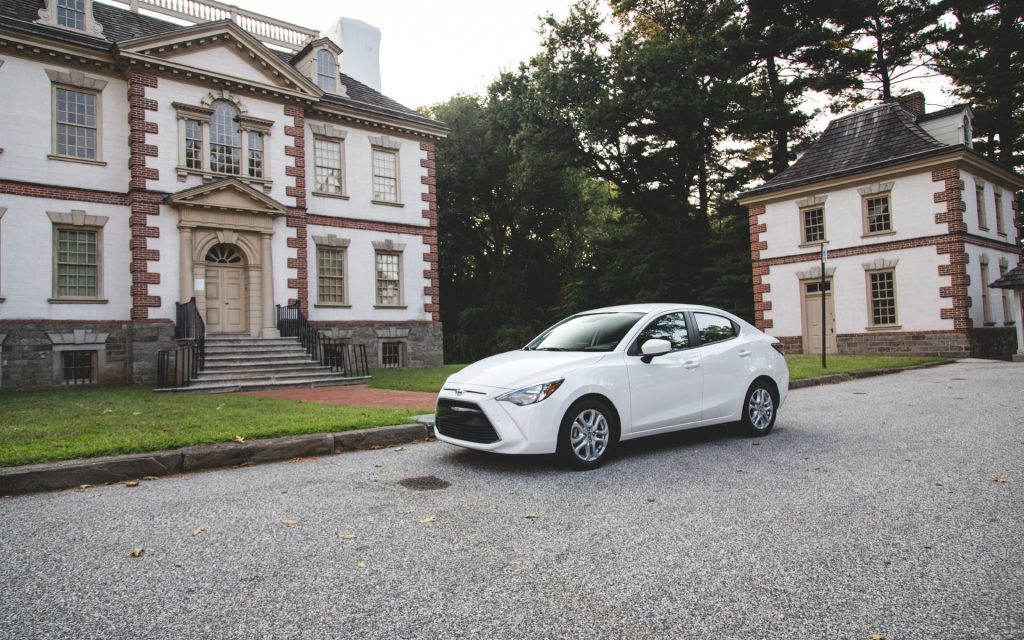 Because the Scion iA is basically a rebadged, fourth generation Mazda2 sedan, or Demio in Asian markets, it pretty much looks the part. Put both next to each other, or at least try and remember what the other looks like, and you’ll see they’re pretty much indistinguishable. The Scion iA sedan is a hip and modern looking thing, heavily mimicking Mazda’s Kodo design language of its larger models. This both works for and against the Scion iA’s case.

Firstly, it means the Scion iA is a great looking car, until you look at the front–but we’ll get to that in a minute. It works against the Scion’s case because that means it’s obviously a rebadged Mazda2/Demio.

And then, there’s that grille on the Scion iA. Signature big, gaping, mouthful grilles aren’t really new. Audi’s been doing it for years and Lexus, Toyota, and other brands are catching onto the trend. But the result of this trend is a great polarity between aesthetic hits and misses with front ends. Mazda’s guilty of hopping onto the gaping grille trend with the Kodo design. The same grille can be found across its entire lineup, denoting a “signature Mazda look.” And it actually doesn’t look half bad.

The Scion’s treatment however makes it look like a depressed wide-mouthed bass. Or, from certain views, it looks completely and totally pissed off. The rest of the car is fine, because again, it’s a Mazda2. Scion’s appended strange sad-face grille just messes it all up. 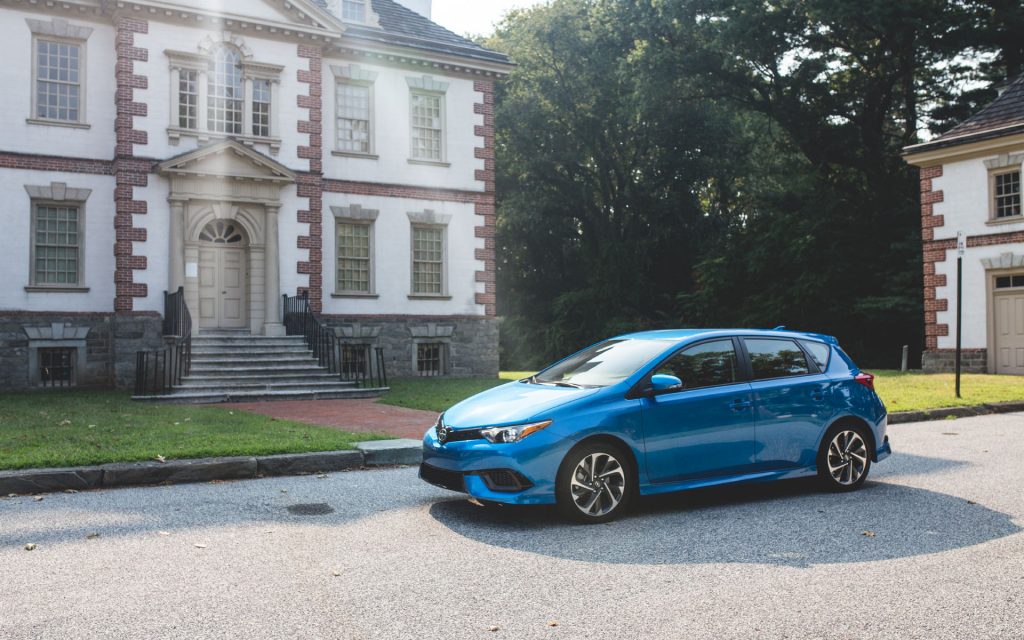 The Scion iM comes off as a much less dramatic looker as it’s a five-door hatch. More so, it’s a European-spec Toyota Corolla Auris five-door hatch. All that’s different are the badges and maybe some packaging arrangements and lighting designs.

Overall the design is a little bit more mature. But you can easily change that with a bright neon-yellow or blue exterior hue. But the Auris altogether isn’t a bad looking hatchback. It’s modern, edgy, and clearly a Toyota product. But is it enough to turn young millennials on? Only time will tell. 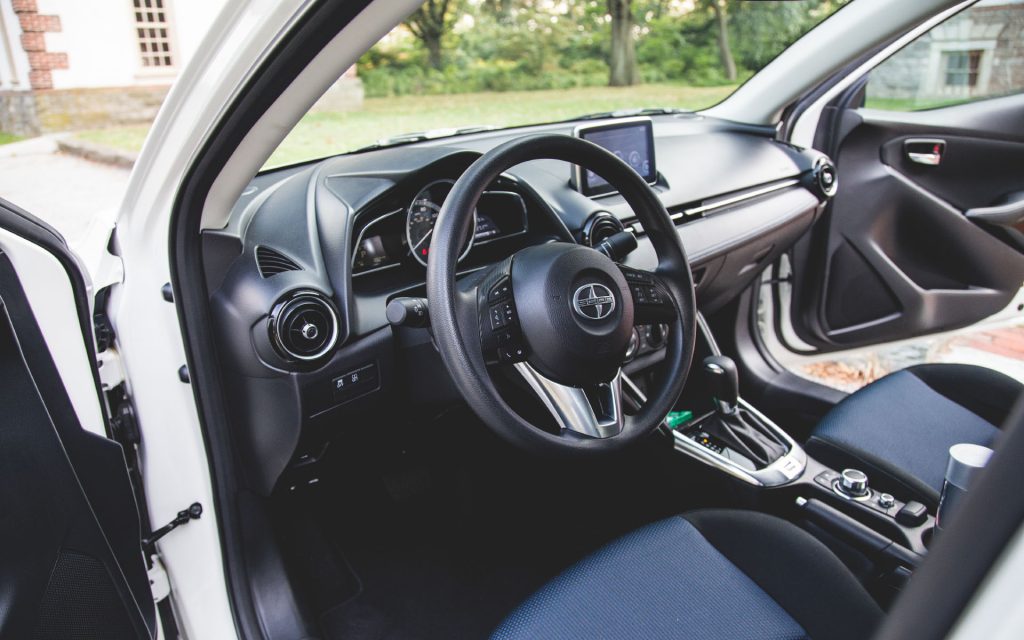 As with the exterior, the interior of the Scion iA is purely Mazda, but with Scion badges. The latest and greatest Mazda models have been scoring well with interior build quality. So there’s not much surprise to find decent hard plastics and vinyl in the Scion iA. You still feel like you’re in a C-segment car. But a good one.

The seats are comfortable and well padded with support. The cabin keeps road and wind noise to surprisingly minimal levels and over all, the car feels pretty solid. The raked shoulder line and the high rising truck do make rearward visibility a bit tight and there’s a bit of a cocooning, “driver’s car” feel to the Scion iA. Again, all Mazda’s work to make the Demio/2 a sporty subcompact. 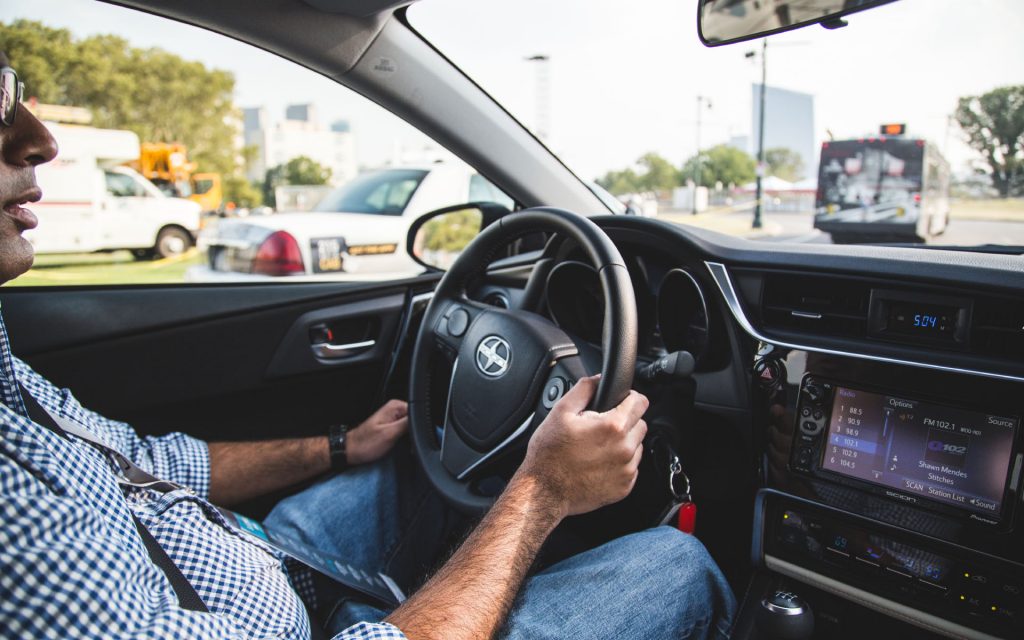 The Scion iM hatch also benefits from good build quality because of its direct Toyota roots. But the difference in execution is once again outstanding. While the Scion iA feels sporty because of its Mazda roots, the iM feels more like a run-of-the-mill Toyota and thus, not as sporty.

The seats are flatter and not as supportive, but still provide adequate comfort. The cabin is much more spacious and because of the more squarish profile, the interior seems far more vast than the iA. Rightfully so since the iM is a larger vehicle overall. 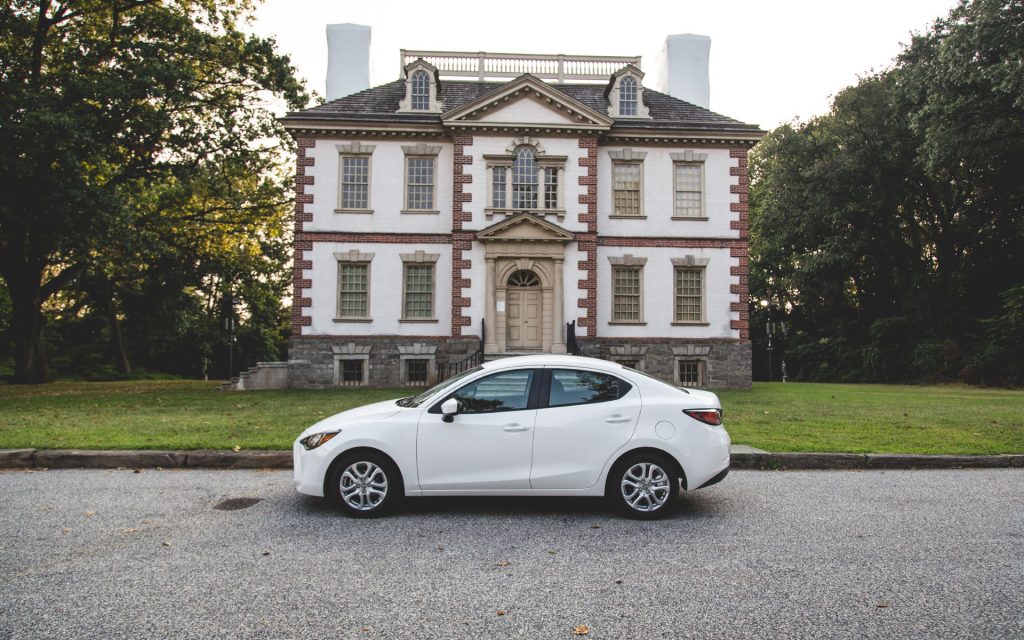 With Scion masking its Mazda roots, you’d expect the iA to drive well. And it does. Mazda worked hard to develop its current line of competitive mainstream vehicles with plenty of commendable mannerisms. So it clearly shows with the iA.

Power comes from a naturally-aspirated 1.5L SKYACTIV-G inline-four with 106 horsepower and 103 pound-feet of torque. Either a six-speed manual or a traditional six-speed auto are the cog swappers of choice. Thankfully, no character robbing CVTs for the iA. The result is a 0-60 mph time of around nine seconds.

It doesn’t sound like much, but it is adequate. We imagine getting anywhere with haste could be an issue once the car is fully loaded. But the manual is easy to operate. Shifter actions are smooth and straight-forward and the clutch is light. Even if you’re not a manual driver, the Scion iA is a good place to learn and it’s the transmission to choose if you like any sort of engaging driving experience. 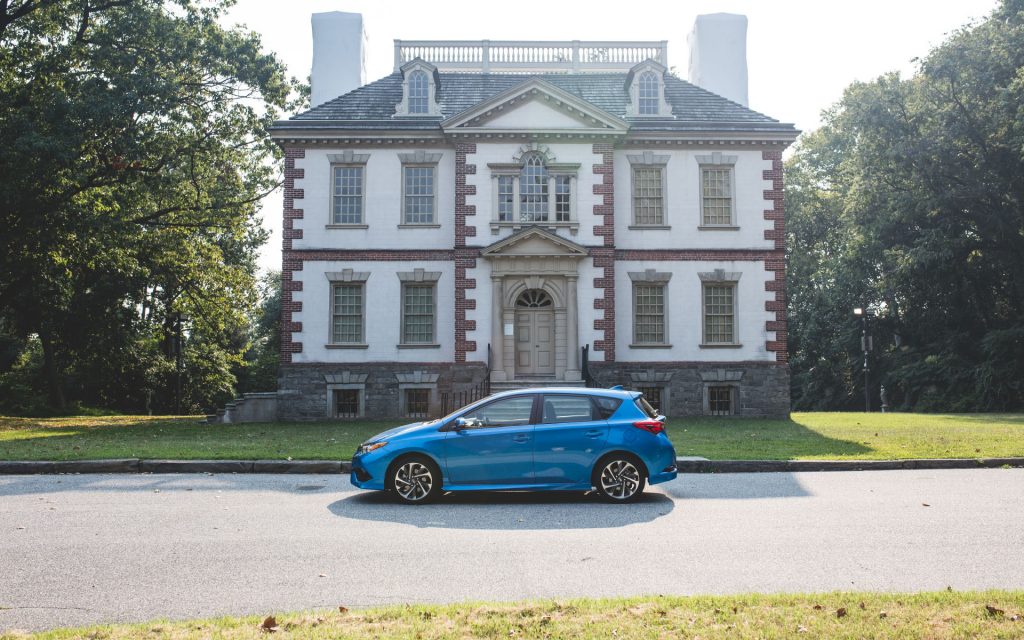 While differences in execution are clear for both car’s aesthetics and interior feel, the same differences are observable with the way both the iA and iM drive. The iA drives like a cheap, but well-sorted Mazda, because it is one. And the iM, drives very much like the Euro-spec Corolla that it is. Handling overall is in line with everything else in its class. But it’s mostly in the details where Toyota’s effort to get the hang of building a driver’s car still fumble.

For instance, while the Scion iA is powered by a zippy Mazda SKYACTIV-G 1.5L naturally-aspirated four, the Scion iM does with Toyota’s ubiquitous ZR-based naturally-aspirated inline-four. The American application and the only choice for the Scion iM is the 1.8L 2ZR-FE, the same engine that sits under our Corolla. Europeans and Japanese benefit from more variants of the same engine, some diesel options, and even a hybrid model. Where as the Scion iA’s Mazda mill features direct-injection, the iM’s four-banger does away with tradition port-injection. The result is 137hp and 126 lb-ft of twist. Thankfully, a six-speed manual is still optional. The automatic is a tragic fuel-saving CVT with six-simulated forward gears.

There’s plenty enough power just to get things going and the mill is also surprisingly rev-happy. But there isn’t nearly as much verve as the Mazda mill in the iA. Torque is also there but the 0-60 time is still not really anything to shout about, taking around nine seconds. And the manual transmission is easy to operate, but the clutch is a bit vague and soft.

Again, Mazda roots means Mazda handling. The Demio/2 is a zippy little thing and when you decide to be aggressive with it, it responds just as well as every other Mazda currently available. Keeping with Mazda’s SKYACTIV theme of keeping the weight low, the engine efficient and small, and a focus on fun, easy handling rather than brute force, the iA is clearly a cheap and fun car to drive. You won’t outrun or out-handle much, but there’s still enough potential to bomb an off-ramp if some douche bag in an SUV won’t get off your ass.

The steering is well-weighted and there’s decent amount of feel. It’s also accurate and turn-in is light since the car doesn’t have much to lug around to begin with. But thankfully, there’s no trade-off to the composed and light handling. The suspension travel and tire size were able to soak up some of the hardest bumps and potholes Philadelphia streets had to offer. Noise, vibration, and harshness levels are also surprisingly minimal.

While handling expectations aren’t particularly high for either of these cars, the iA is more obviously the better car to drive. The Scion iM responds to inputs adequately and body roll is minimal. And like the iA, Philly’s worst roads were ironed out pretty reasonably–something the standard Corolla is also good at. This is mainly attributed to a fully-independent rear suspension setup, rather than a cost-cutting torsion beam setup.

But the iM just didn’t seem to be as much of as a driver’s car. The driving position is awkward, the steering is lifeless and over-boosted. And overall, the driver just doesn’t feel as connected to the machine as the iA. Scion and Toyota did say that a TRD suspension kit will be available in the near future, which could improve handling.

If you’re in the market for a cheap, affordable form of transportation, you’ll get a decent automobile out of either of these. But bear in mind. Even though they’re greatly improved when compared to their predecessors, this is pretty much as basic as basic transportation gets. And sadly, Toyota still has yet to really depart from being the poster child for mundane and bland automobiles. They are trying hard, but not hard enough.

Both the Scion iA and iM are perfectly OK automobiles. They drive decently, are well-equipped, cheap, and efficient. But if you crave any sort of fun-to-drive factor in your driving experience, there are plenty of more interesting and fun things to buy if the Scion iA/Mazda2 don’t cut it for you. 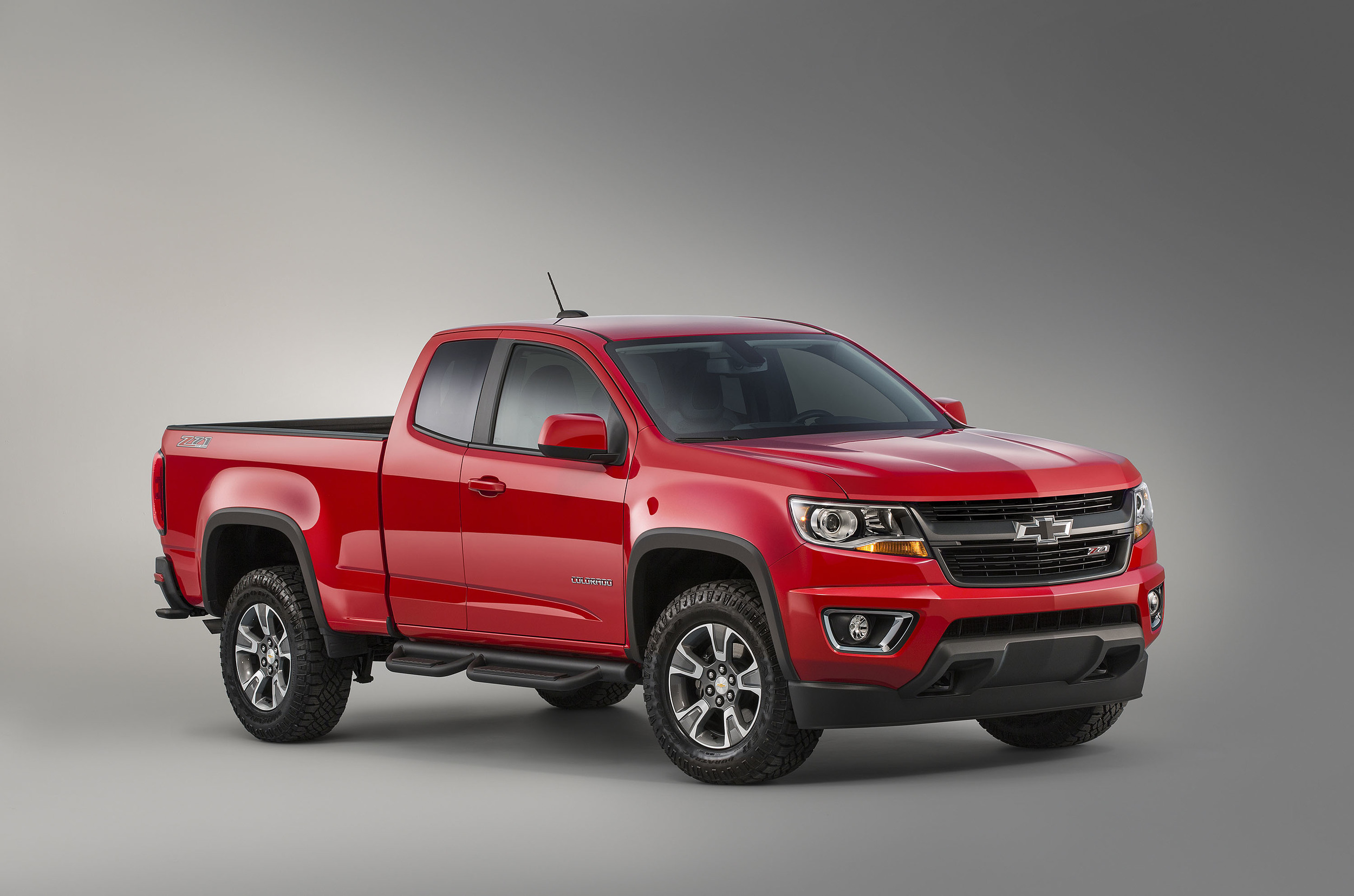 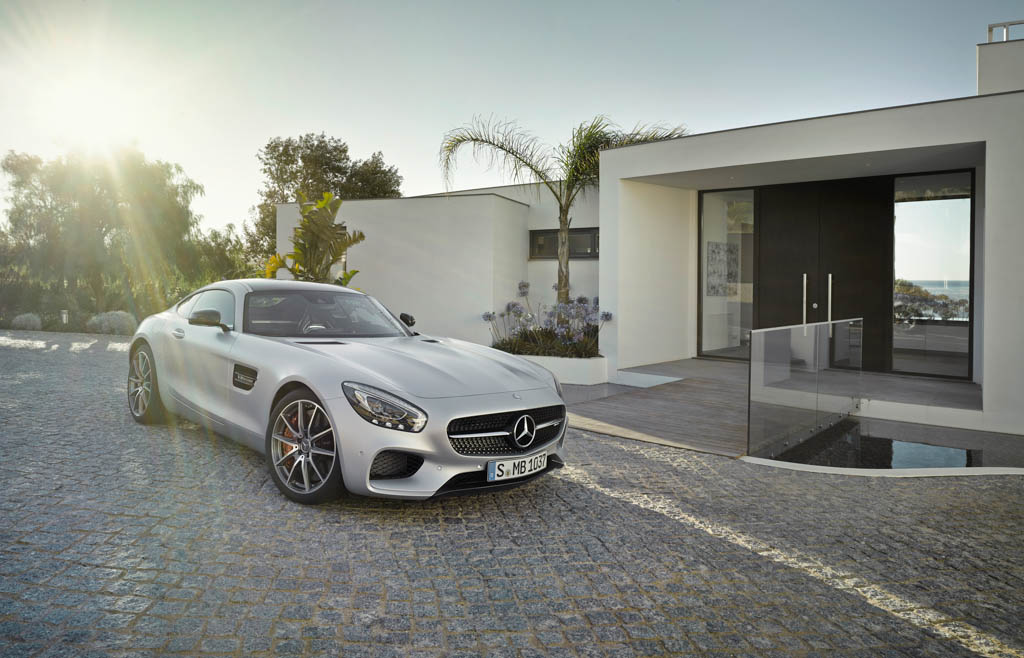 Report: The hot Mercedes-AMG GT R anticipated to arrive in 2016 with more power and less weight

November 30, 2015 Chris Chin Comments Off on Report: The hot Mercedes-AMG GT R anticipated to arrive in 2016 with more power and less weight