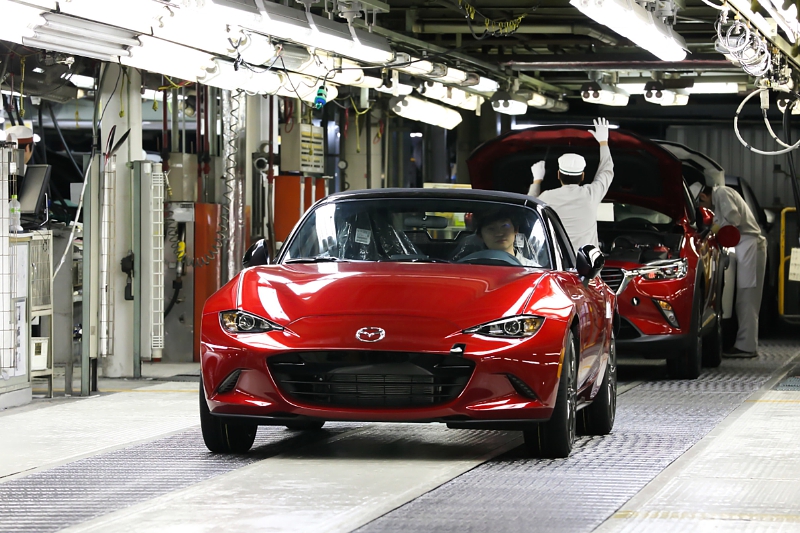 The wait is over ladies and gentlemen, at least, the wait for Mazda to begin production of the US-spec Miata because Mazda just commenced production in Japan for the new 2016 model.

How much will it cost you? About $24,915 for the price of entry and with that, you get a Miata with a 2.0L SKYACTIV-G four with 155hp and 148 lb-ft of torque, LED headlights, 16-inch alloys, Bluetooth connectivity, and power door locks.

The next level up moves you to the $28,600 Miata MX-5 Club, revealed at the 2015 New York Auto Show. That gains some sportier bodywork like a front and rear lower fascias, piano black roll-over protection bars, piano-black mirror caps, dark  17-inch alloys, and more.

Should you want even more performance-oriented options, a $3,400 performance package is available, adding Brembo clamps, an aerodynamic side skirt, a revised rear fascia, and 17-inch BBS forged wheels.

IRVINE, Calif., April 20, 2015 — The wait is almost over, as North America-bound 2016 Mazda MX-5 Miata production began today, signaling the imminent arrival of the next generation of the world’s most popular two-seat roadster at U.S. dealers. Additionally, Mazda North American Operations (MNAO) has released pricing for the entire MX-5 range, including the first 1,000 cars earmarked as Launch Edition models.

“The three trim levels available – Sport, Club and Grand Touring – are tailored for three very different types of customers, broadening the MX-5’s appeal,” said Rod McLaughlin, MX-5 vehicle line manager, MNAO. “Whether customers opt for a Sport, Club, Grand Touring or Launch Edition, we’re confident the new MX-5 will deliver the same owner passion, excitement and pride that have made the previous generations among the most beloved cars on the road or racetrack at any price point.”

The 2016 MX-5 Launch Edition will comprise the first 1,000 fourth-generation roadsters sold in the U.S., carrying unique badging and with an MSRP of $30,1951. MX-5 Launch Edition comes equipped with features reserved for the MX-5 Grand Touring trim, in addition to Advanced Keyless entry, which is optional in other trim levels. All 1,000 Launch Editions are painted Soul Red with a Sport Tan leather interior – a combination exclusive to the Launch Edition for 2016.

To purchase an MX-5 Launch Edition, customers can currently preregister at www.LongLiveTheRoadster.com and will receive a reminder email prior to orders opening on May 5. Customers will then have the opportunity to place a $500 deposit toward the purchase of a 2016 MX-5 Launch Edition, also providing them the opportunity to select a dealership from where they can take delivery. MX-5s are expected arrive in dealers starting late summer.

The Launch Edition’s sole option will be the choice of a six-speed SKYACTIV-MT manual transmission or the six-speed automatic, the latter of which carries an MSRP of $31,2702.

“The MX-5 Launch Edition will give enthusiasts the opportunity to take ownership of one of the very first, very exclusive, 2016 MX-5s to arrive in the U.S.,” said Jim O’Sullivan, president and CEO, MNAO. “Along with the privilege of exclusivity and being among the first 1,000 to take delivery, owners will be able to enjoy one of the purest expressions of open-top driving exhilaration available today as well as our latest entertainment, safety and luxury technologies – many of which are unique among sports cars.”

MX-5 Sport to Have More Standard Features Than Previous Generation

At the opposite end of the MX-5 lineup, the 2016 MX-5 Sport has a starting MSRP of $24,9153, riding on 16-inch alloy wheels and carrying a host of new standard features such as a six-speed SKYACTIV-MT manual transmission, cruise control, LED headlights and tail lights, Bluetooth phone pairing and audio streaming, leather-wrapped shift knob, power door locks, single USB input and cruise control.

Those who want to step up to a higher level of content will have a choice between distinct trim packages: the distilled, performance-focused MX-5 Club or MX-5 Grand Touring, lavished in premium amenities and technology.

Smaller, lighter and more focused, the 2016 MX-5 is purpose-built with one goal in mind: providing the thrills and wind-in-the-hair driving experience that only the MX-5 can deliver. At 2,332 lbs. when equipped with SKYACTIV-MT (2,381 lbs. with the automatic transmission), MX-5 is approximately 150 lbs. lighter than the vehicle it replaces as a result of Mazda’s efficient SKYACTIV®6 TECHNOLOGY. MX-5’s lighter weight, enhanced technologies and greater performance should help ensure that the 26th year of the MX-5 will be just as exciting from behind the wheel as the first 25 have been.