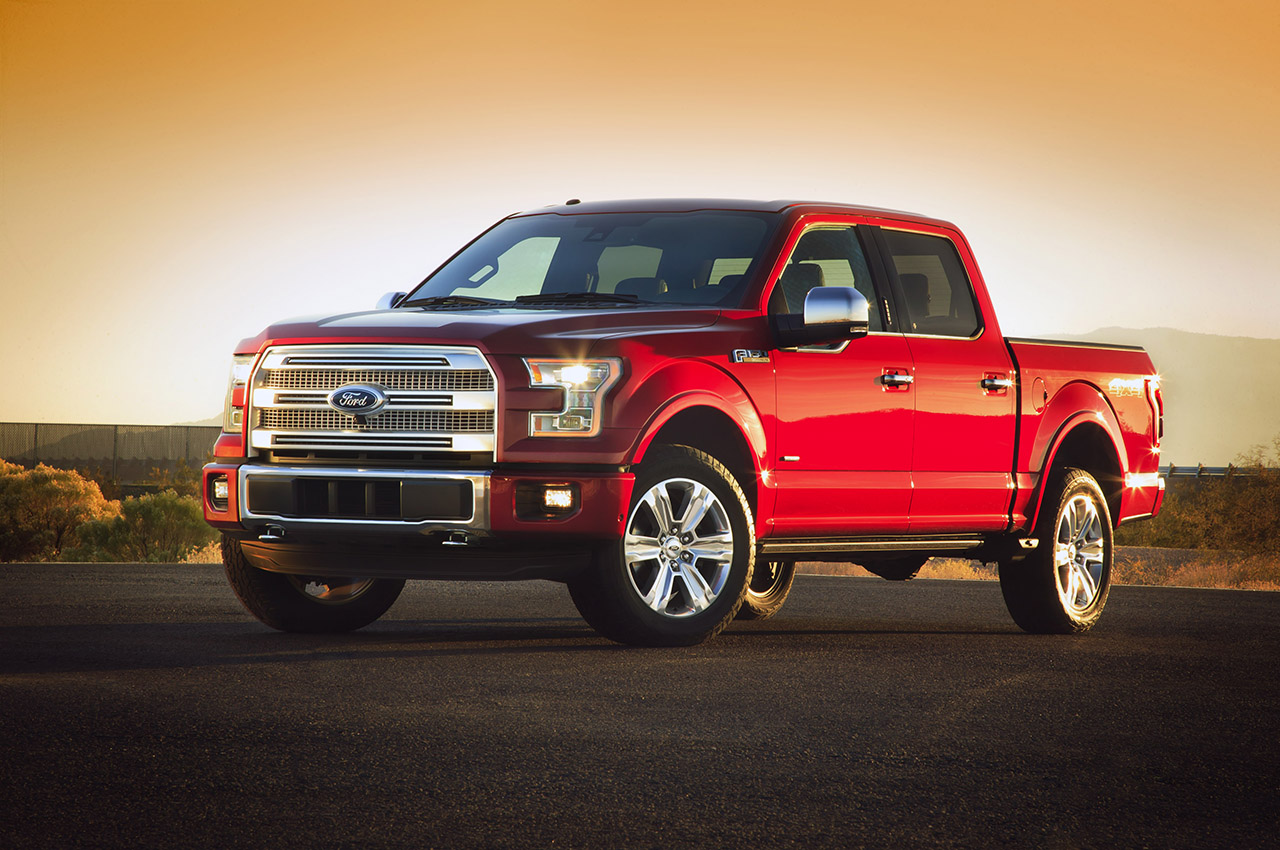 The 2015 Ford F150 is just about here and the Dearborn automaker released some details surrounding the new model.

Besides the obvious switch from using a traditional steel body to an all-aluminum one, the F150 receives a new base naturally-aspirated 3.5L V6 good for 283hp and 255 lb-ft of torque, allowing for a maximum tow rating of 7,600lbs. The more notable engine however is the highly-anticipated 2.7L EcoBoost V6, which is turbocharged to produce 325hp and 375lb-ft of torque.

Click here for more news on the Ford F150.

Though Ford still hasn’t released official curb weight figures, something that we’re eager to learn since the whole centerpiece of the new F150 is its lightweight aluminum-bodied construction. Either way, with an estimated 732lb diet docked off the current 2014 Ford F150 Super Crew’s figure of 5,128lbs with the 3.7L V6, that would put the new base crew cab F150 at around 4,400lbs–an impressive feat by any measure.

Use of high-strength steel and high-strength, military-grade, aluminum alloy plus smart engineering saves up to 700 pounds, improving power-to-weight ratio and allowing for gains in towing, performance and efficiency

“The 2015 F-150 is the most capable F-150 yet, while shedding up to 700 pounds,” said Bob Fascetti, vice president, Powertrain Engineering. “These two new V6 engines – the 2.7-liter turbocharged EcoBoost and normally aspirated 3.5-liter Ti-VCT – set a new standard for Ford for capability and efficiency.”

2.7-liter EcoBoost power
The high-output, twin-turbo 2.7-liter EcoBoost V6 features an entirely new design that delivers power and performance in a strong, smart package. The engine produces 325 horsepower and 375 lb.-ft. of torque – improving the power-to-weight ratio of the 2015 truck by 15 percent over the 2014 5.0-liter V8-equipped F-150 with similar torque output, thanks to vehicle light-weighting.

The 2.7-liter EcoBoost 4×2 has a maximum payload rating of 2,250 pounds and maximum tow rating of 8,500 pounds, ideal for meeting mid-range capability needs.

Boosting 2.7-liter EcoBoost fuel efficiency is the debut of standard Auto Start-Stop technology for F-150. This technology, specially tuned for truck customers, shuts off the engine when the vehicle is at a stop. When the brake is released, the engine restarts quickly. Auto Start-Stop helps reduce fuel consumption and emissions when the truck is stopped and the engine is off. The technology is off when towing or in four-wheel-drive mode.

Advanced technology, power and efficiency combine to create an engine for F-150 that boasts more than twice the horsepower, torque and towing capability of the Toyota Tacoma midsize pickup truck with identical displacement 2.7-liter four-cylinder engine.

Ford testing shows the 2.7-liter EcoBoost also outperforming Ram 1500 3.0-liter V6 EcoDiesel and Chevrolet Silverado 1500 5.3-liter V8 while towing a 7,000-pound enclosed trailer up Davis Dam in Arizona. This is the same grade the Society of Automotive Engineers uses for its J2807 towing testing standards, which the 2015 Ford F-150 will follow.

3.5-liter V6 tuned for responsive power
Thanks to vehicle weight savings, the standard 3.5-liter V6 with Ti-VCT offers a 5 percent improvement in power-to-weight ratio over the larger 3.7-liter V6 in the 2014 F-150, with better fuel efficiency and performance.

Both the upper and lower intake manifolds of the 3.5-liter V6 are tuned for responsive power, and both the intake manifolds and cam covers are composite-formed to reduce weight. The die-cast aluminum cylinder block features bay-to-bay breathing to reduce internal pumping losses, while a deep-sump oil pan contributes to extended oil-change intervals.

Advanced materials save weight
Extensive research by Ford engineers led to the use of more advanced materials on the 2015 F-150 than found in previous trucks. Military-grade aluminum alloys make the new truck’s body lighter, stronger and more resistant to dents.

Overall, F-150 is up to 700 pounds lighter – helping the truck tow and haul more, accelerate and stop faster, and operate more efficiently than the previous F-150. High-strength steel in the frame and high-strength aluminum alloy throughout the body produce an inherently stiffer truck with greater dent and ding resistance. The aluminum upper body sits on a fully boxed ladder frame with more high-strength steel than ever to make it stronger yet lighter.

In addition to the new V6 engines, the all-new 2015 F-150 offers the proven 3.5-liter EcoBoost and the 5.0-liter V8 with Ti-VCT, providing a comprehensive, capable and efficient engine lineup to meet the specific needs of Ford truck customers.