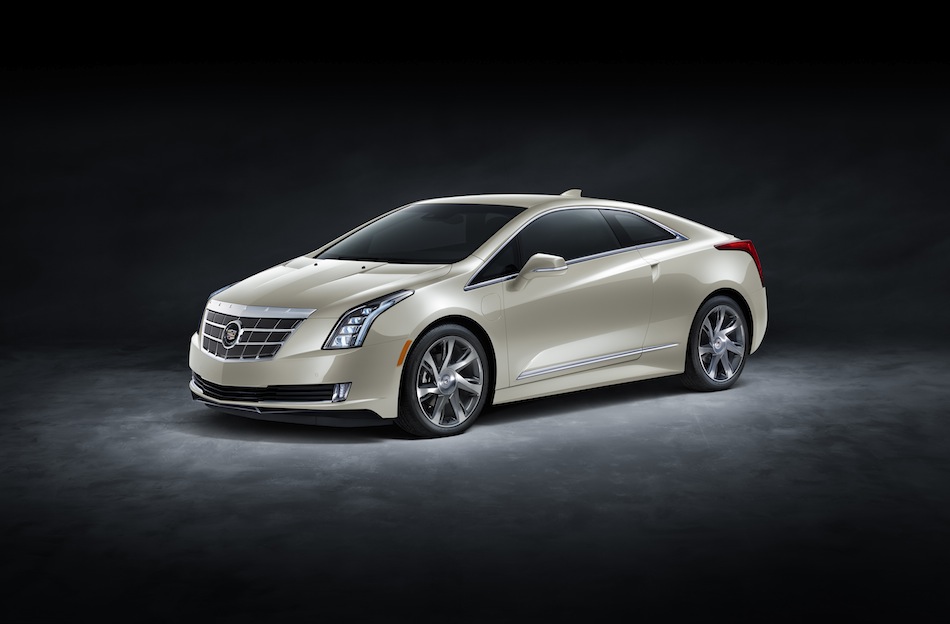 Cadillac revealed a stylized version of their new ELR plug-in electric luxury coupe, just in time for the holiday season. Similarly to how Neiman Marcus usually dresses up a Lexus for their Christmas book, Cadillac had their ELR done up by Saks Fifth Avenue to create their own special edition.

Click here for more news on the 2014 Cadillac ELR.

That said, the special edition ELR will be showcased in Saks Fifth Holiday Catalog for the 2013 year and will be the official vehicle for their First LOOK Campaign.

Later in the month, Cadillac and Saks Fifth will also reveal a “Frozen Escalade,” which will exclusively get window display time at Saks’ flagship store near Rockefeller Center. So you can do some window-shopping while you take your loved ones for some ice skating.

Cadillac and Saks Fifth Avenue are rolling out their holiday festivities, hosting events at Saks retail stores in key markets with more events to follow throughout the fall and early winter.

On November 25, Cadillac and Saks Fifth Avenue will reveal a specially designed “Frozen Escalade” window display at the Saks flagship store near Rockefeller Center on Fifth Avenue in New York City. The display will feature a White Diamond 2015 Escalade with functioning light-emitting diode, or LED, running lamps, which appear embedded and breaking through a wall of ice.

This year’s Saks Fifth Avenue Holiday Catalog features the 2014 Saks Fifth Avenue Special Edition Cadillac ELR. This package, limited to 100 units, will include a 2014 Cadillac ELR with a White Diamond exterior paint color only available through this package. Buyers will be able to choose between a Jet Black or Light Cashmere interior. Also included is an upgraded 240-volt charging station with professional installation and applicable permits, valued at up to $3,000. To order, customers can call 1-855-SAKS-CAD (1-855-725-7223).

Owners of this 2014 Saks Fifth Avenue Special Edition ELR will also have their own ELR Concierge Representatives. Trained in white-glove customer care, the Concierge Representative is an additional point of contact beyond the customer’s Cadillac dealer for information on battery care, home charging, service scheduling, and news and updates by calling 1-855-INFO-ELR (1-855-463-6357).

The 2014 Saks Fifth Avenue Special Edition ELR package is priced at $89,500, which includes a $995 destination charge. Customers can order their vehicles now with delivery expected in March 2014.

“Our partnership with Saks Fifth Avenue embraces the brand’s sharp eyes for aesthetics, and puts the all-new 2014 ELR and the Cadillac brand front and center with buyers this holiday season,” said Melody Lee, director of Global Cadillac brand and reputation strategy. “We are excited to be part of the Saks Holiday Catalogue and offer the limited-edition ELR exclusively to Saks customers.”

About Saks Fifth Avenue
Saks Fifth Avenue, one of the world’s pre-eminent specialty retailers, is renowned for its superlative American and international designer collections, its expertly edited assortment of handbags, shoes, jewelry, cosmetics and gifts, and the first-rate fashion expertise and exemplary client service of its Associates. As part of the Hudson’s Bay Company brand portfolio, Saks operates 41 full-line stores in 20 states, five international licensed stores, 72 Saks Fifth Avenue OFF 5TH stores and saks.com, the company’s online store. Saks Fifth Avenue is proud to be named a J.D. Power and Associates 2012 Customer Service Champion and is only one of 50 U.S. companies so named.

Video: 2011 Audi RS5 hits the track with Ur Quattro