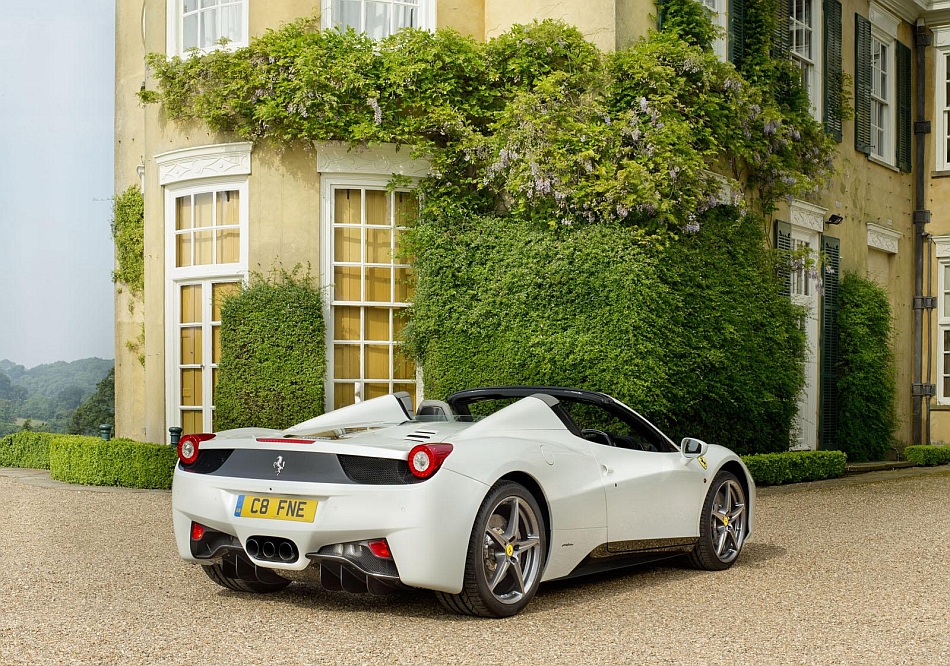 The Goodwood Festival of Speed in the United Kingdom is one of the next worldly shows to happen and to get petrolheads excited, Ferrari officially announced that they’ll be showcasing a series of unique models at this year’s event.

In addition to showcasing the usual and current offerings of models and personalization available with said models, Ferrari will also have a unique FF, a “Tailor-Made” 458 Spider, and famous rock legend Eric Clapton’s SP12 EC, which was made at the hands of Ferrari’s “Special Projects” division.

The special FF and the “Tailor-Made” 458 Spider are fairly straight forward with the former being equipped with a bespoke panoramic glass sunroof and a semi-aniline interior, the latter being festooned with a special Ice White Pearl exterior color with Grigio Silverstone racing stripes, alcantara seats, and carbon fiber trim. Eric Clapton’s own SP12 EC was a completely bespoke and custom model completed specifically for Clapton himself. The model itself is based off of a 458 Italia and was specifically modeled—under Clapton’s discretion—to mimic the classic 512 BB.

For full details about Ferrari’s display at this year’s Goodwood Festival of Speed, check it out after the jump.

FERRARI AT THE 2013 GOODWOOD FESTIVAL OF SPEED

Maranello, 5 July 2013. Ferrari is proud to announce the Goodwood debut of the F12berlinetta at this year’s Festival of Speed. In addition, a selection of vehicles representing the various levels of personalisation available from Ferrari will be demonstrated including a bespoke FF, a “Tailor-Made” 458 Spider and Eric Clapton’s SP12 EC, produced by Ferrari’s “Special Projects” division.

The F12berlinetta is the newest generation in Ferrari’s great lineage of 12-cylinder sports cars. Aerodynamic efficiency was a top priority in the styling and development of the F12berlinetta, which features increased downforce and reduced drag figures. The Aero Bridge and Active Brake Cooling system are two new innovative aerodynamic solutions Ferrari have incorporated into the vehicle’s design, while still managing to maintain the elegant proportions typical of Ferrari’s front-engined V12 cars.

Its 6,266cc direct-injected V12 produces a maximum output of 740hp and recently won the title of ‘Best Performance Engine’ in the International Engine of the Year Awards. While the F12berlinetta the most powerful road-going Ferrari ever produced, it delivers fuel consumption and emissions levels that are 30 per cent lower than that of the previous generation. Mated to Ferrari’s 7-speed dual-clutch F1 transmission, 0-62.5mph is reached in just 3.1 seconds and a top speed of over 211mph is possible.

Ferrari’s V12 four-seater GT, the FF, will also appear at Goodwood this year showcasing a new option: a panoramic glass roof. This is made from low emissions glass and thus holds cabin temperature steady both in summer and winter, for optimal climate control. The glass is tinted for privacy but still gives the occupants the feeling that they are travelling with the top down. The FF features a Grigio FF exterior, which is complemented by a navy blue semi-aniline leather interior.

The 458 Spider demonstrates the wide variety of options that are available through Ferrari’s Tailor-Made programme. This particular 458 Spider is finished in Ice White Pearl and is accented by Grigio Silverstone racing stripes running down the centre of the bonnet, roof, tonneau cover and engine cover. The interior is upholstered in a combination of black and grey leather; the latter covering surfaces on the door panels, rear luggage bench, centre tunnel and the extremities of the racing seats. Grey alcantara is used for the central part of the seats while a silver cordura stripe adds a highlight to the profile. Unifying the theme between the interior and exterior is pin stripe detailing on the inner carbon-fibre trims in Ice White Pearl.

Representing the ultimate level of exclusivity available through Ferrari’s One-Off Programme will be Eric Clapton’s SP12 EC. Designed by Centro Stile Ferrari in collaboration with Pininfarina and the engineers from Maranello, the SP12 EC’s styling is influenced heavily by the 512 BB. Clapton’s decision to homage to the Berlinetta Boxer can be traced back to his intimate relationship with the V12 flat-engined Ferrari, of which he has owned three examples. The musician claims the process of designing his dream Ferrari was ‘one of the most satisfying things [he’s] ever done.’

Ferrari will also be represented by the Scuderia Ferrari team who will be demonstrating their 2010 Formula 1 car throughout the weekend, driven by Scuderia Ferrari driver, Marc Gene. The F10 chassis, no.285, was piloted by Fernando Alonso to four victories in 2010, including an Italian Grand Prix victory at Monza.