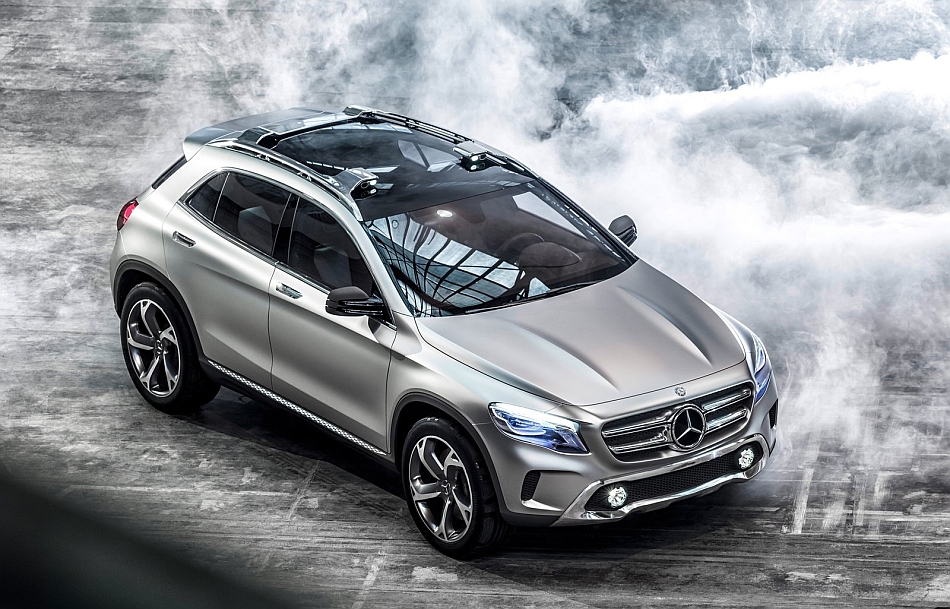 Preceding the automotive festivities at the 2013 Shanghai Motor Show in China, Mercedes-Benz unveiled their all-new 2013 Concept GLA compact SUV crossover, which is supposedly their answer to BMW’s X1, Audi’s Q3 et al. The new 2013 Mercedes-Benz Concept GLA promises to offer some all-new technology such as headlamps with “laser technology” that outshine the current standard high-intensity discharge bulbs, and more.

“The Concept GLA marks a new approach for us in the compact SUV segment – this is a sporty and more coupé-like evolution of this category of vehicle,” said Dr. Joachim Schmidt, Mercedes-Benz’s vice president for sales and marketing. “The Concept GLA is a compact SUV that combines its sporting spirit with the all-round qualities of a tough, leisure-time companion. ‘Escape the everyday’ is the message that this car conveys to its driver. It also makes clear the further potential of our compact vehicle architecture, which provides the basis for the A- and B-Class models that led the German market in their respective segments in the first quarter of 2013.”

It is said to be powered by a 2.0L turbocharged four-banger good for 208hp mated to Mercedes-Benz’s incoming seven-speed dual clutch automatic and 4MATIC all-wheel drive.

MONTVALE, NJ – Mercedes-Benz announced today that it will debut the Concept GLA premium compact SUV at the Shanghai auto show (April 21- 29). The Concept GLA blends dramatic styling with clear functionality for recreational use. Under the hood of this new concept vehicle
(length/width/height: 172.5/77.8/62.1 inches) sits a four-cylinder turbocharged gasoline engine rated at 208 hp with a displacement of 2.0 liters. Its power is transmitted to the road via the 7-speed dual clutch automatic transmission and 4MATIC all-wheel drive. A unique highlight
is the new headlamps featuring laser technology, which not only shine more light on the road, but also function as projectors.

“The Concept GLA marks a new approach for us in the compact SUV segment – this is a sporty and more coupé-like evolution of this category of vehicle”, commented Dr. Joachim Schmidt, Executive Vice President Mercedes-Benz Cars, Sales and Marketing. “The Concept GLA is a compact SUV that combines its sporting spirit with the all-round qualities of a tough, leisure-time companion. ‘Escape the everyday’ is the message that this car conveys to its
driver. It also makes clear the further potential of our compact vehicle architecture, which provides the basis for the A- and B-Class models that led the German market in their respective segments in the first quarter of 2013.”

Clever use of SUV design cues: the exterior design

Clear evidence of the innovative thinking on the part of the designers that has gone into this concept vehicle is provided by a number of distinctive features. These include the powerful hood with its powerdomes and a bold radiator grille with centrally positioned star. The new trim surrounding the star merges elegantly into two horizontal bars. Also new are the “softcubes”: these are soft, raised pads that help to give definition to the radiator grille and are also found
on the side sill panels and surrounding the exhaust tailpipes.

The distinctive door mirrors, with their twin supporting struts, are fitted with a protective grille. This, like the skid plate at the front, is very typical of an SUV. The striking appearance of the Concept GLA is also due in no small part to its silver Alubeam paint finish. Even when viewed from the side, the Concept GLA conveys a sense of power and confidence. This reinforces the overall design philosophy behind the vehicle with a “dropping line” that extends from the headlamp to the rear wheel arch. The beltline trim rises slightly from the rear door towards the Cpillar. Together with the light-catching contour formed by the curvature of the vehicle flank and the line that rises from the level of the door sill towards the dropping line, this creates a unique interplay of lines that adds to the sense of powerful elegance. The slim door handles of the five-door vehicle are fully recessed, emerging at the touch of a button. The frameless side windows also emphasize the coupé characteristics of this concept vehicle.

The 20-inch wheels, with their distinctive five-spoke turbine design, are shod in size 255/45 R 20 tires. These have been specifically created for the Concept GLA: their tread pattern continues the lines of the spokes in an optical illusion that makes the wheel spokes appear longer. The muscular haunches above the rear axle, accentuated by the way the
C-pillar is pulled in slightly, extend to the rear over the light clusters, also emphasizing the broad stance of the tail end. The result is a powerfully taut arc that nevertheless avoids aggression. This impression is reinforced by the curvature of the rear window and the elegant chrome strip between the rear light clusters. The large roof spoiler is another eye-catching feature. This
follows through very neatly on the structure of the rear roof paneling and provides the housing for the additional brake light.

Further SUV references, such as a load sill guard and a concealing skid plate fascia panel, highlight the rear bumper. The twin-pipe exhaust system complete the SVU’s aggressive appearance. The tailgate features a power closing system that allows it to be opened or
closed at the touch of a button. Opening the tailgate with its integrated rear light cluster reveals supplementary lights to warn approaching vehicles of the open tailgate. Further light clusters are housed in the rear cross member between the roof rails.

In terms of its design, the interior reflects a clear alignment with the interiors of the other new compact Mercedes-Benz models, reinterpreted here for a sophisticated and exceptionally high-quality SUV. It is dominated by an exciting contrast of leather and dark galvanized aluminum. The four individual seats and the door center panels are upholstered in natural leather in a rich brown tone. Both color and workmanship bring the image of a saddle to mind: all in all, the Concept GLA incorporates more than 65 feet of hand-stitched seams to hold the raw edges of the leather together. The seat cushions, which feature central inlay panels in a high-quality canvas material, display an embossed pattern that continues the saddle theme. An illuminated insert is set into the integrated head restraint of each of the four sports seats.

Grey leather with a graphically applied grain is used on the backs of the front seats, among other places, and continues the idea of patterns flowing over from other surfaces. The armrests and center panels of the door linings are designed as a very clear structural unit. The dashboard is constructed in several layers. On top of a leather-upholstered surface sits a framework in a combination of matte and polished aluminum, which provides the necessary support for all the instruments. This is held in place by clearly visible screws, featuring a special design. This unit is
protected from dust and dirt by a plexiglas covering that is illuminated from behind, adding to the impression that the different layers are free-floating. The control buttons for the COMAND system have also been crafted with meticulous technical precision. They are made of plexiglas and painted from the back in black. Symbols are then etched into the black, also from the back,
before being filled in.

The air vents in the dashboard as well as in the rear represent a further stylistic development of the vents used in the Concept A-Class and Concept Style Coupé, and are also illuminated from behind. They change color according to the interior temperature set by the occupants. At a temperature of 71 degrees Fahrenheit they light up in white. If a cooler temperature is selected for the interior, they turn blue, while choosing heated air switches the illumination to red.
Fiber-optic ambient lighting in the load compartment visually extends the line drawn by the center console all the way from the instrument panel through to the rear seats. A rectangular strip of lighting inset into the load compartment floor serves to highlight the storage locations. Luggage can be secured firmly with a spring-loaded four-point harness, as used in helicopters. A simple handle is used to fold the backrests of the rear sports seats forward to create a
level load compartment floor.

Show time! The front headlamps of the Concept GLA are each fitted with a laser-beam projector. These not only provide the light to drive by, but are also capable of projecting pictures or videos onto a screen or other surface. Any media format that can be operated through the COMAND system can serve as a source: pictures or video from a smartphone, the internet, or from a hard drive.

Alternatively, the action can be produced live. The Concept GLA is fitted with two cameras, housed in the front roof rail. And these can be used for far more than just 3D images taken as the Concept GLA drives along: the HD cameras can be removed and, for example, fitted to a mountain bike helmet. An additional lamp unit in each camera ensures that the lighting is right, whatever the situation. As an alternative to the projection option, movies may also be
viewed inside the car on the COMAND screen.

The laser-beam projectors represent far more than simply an academic exercise on the part of the engineers and designers at Mercedes-Benz. As a further enhancement of the head-up display, they could also help to improve road safety: the technology could be used, for example, to project the directional instructions from the navigation system onto the road in the form of
arrows – in this way other drivers and pedestrians would be able to see where a driver is heading.

Laser and LED technology: the headlamps

It is not only the laser-beam projectors and their visible cooling system with rotating vents that make the shimmering blue headlamps of the Concept GLA such an interesting feature. With the “Coming home” function, the blue light begins to pulsate to indicate that the vehicle is ready and waiting for its driver. While the driving lights are the first use of a laser beam reflected off a mirror, the daytime running lamps, with their characteristic “torch” effect, and the indicator lights use LEDs. The indicators feature digital chase lighting strips which blink in a progressive “wave” pattern familiar from the Concept Style Coupé.

BMW X6 gets tuned by Lumma Design, gets 340-hp for X6 diesel 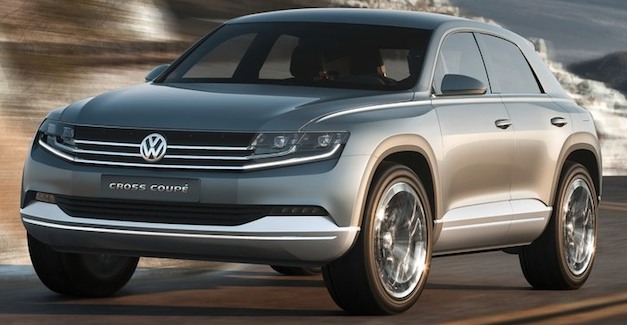