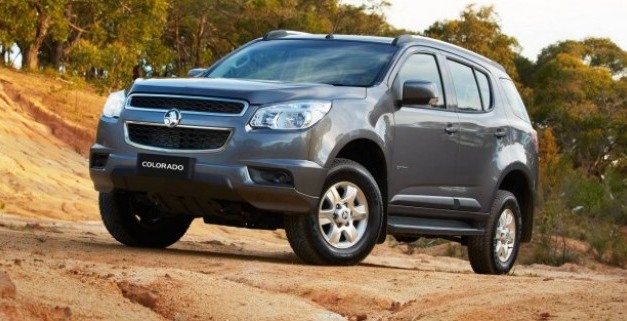 The Colorado 7 by Holden is an adventurous off-road four-wheel drive (4WD) released for 2013. There are some pros and cons to this new SUV: for example, many are excited about the large accommodating interior while there are some complaints about average fuel mileage.

Released in Australia, New Zealand, and Asia, Holden offers a 2.8 liter Duramax in-line four-cylinder turbo-charged diesel engine. If you are looking for an SUV that will rival its competition in interior design, pricing, and towing, then the Colorado 7 is for you. You can get a great deal on a Holden Colorado online so have a look around to see what prices and deals are available.

The exterior features a rugged look that is reminiscent of a commanding tour de force of the SUV family. It features 16-inch alloy wheels, front fog lights, roof rails, and side steps. This is a fully-equipped off-road machine. The Colorado 7 comes with an extensive range of more than 30 accessories, 13 of which have been developed in Australia. Among them is a bull bar which will not impact on the vehicle’s five-star ANCAP rating.

The interior is comfortable and will seat seven. This model is based on the Colorado Ute, a wagon SUV design with a rugged steel-beam ladder-frame chassis including an independent double wishbone and coil-sprung front end, but it has ditched the leaf springs in the rear for a five-link live axle.

Safety features on the Colorado 7 include stability control and airbags but there are only four. The front air bags are missing but the Colorado 7 does have curtain airbags that protect all three rows of seating. Holden has ensured your full safety with the highest five-star ANCAP rating, including Electric Stability Control and Hill Descent Control.

The storage inside is well designed for your comfort and travel. There is a small storage bin on the dash, a twin glove box, and a deep center console. The rear section is well distributed for seating but the seventh seat is crowded – put the tiny one there. When the seat is folded down there is more storage space but the ground is lumpy and uneven.

The engine is a 2.8 liter with a four-cylinder turbo diesel that is tasked to get the job done. This SUV is your workhorse. It is not going to excel or be a shiny bauble. There is a vibration when the engine is idling – some have compared this to a big cat storing energy before the pounce – but in actuality this is the diesel engine chugging away. The 132kW of power is modest for a 2.1-tonne machine, but the 470Nm of torque provides enough muscle to go with its 3,000-kilogram tow. You will get the performance you need but the engine may be louder than you prefer.

The Colorado is more about rugged reliability than comfort and luxury. The bumps and uneven terrain of off-road travel will be bustling and bouncy but even more notable is that you will feel any less than smooth surfaces on highways and roads.

The direct competitors of the Colorado 7 include the Mitsubishi Challenger LS seven-seater, the Nissan Pathfinder ST Diesel, and the Toyota Prado GX, which do offer a smoother ride and better steering. While the Colorado 7 has many features to offer, its competitors are a bit more expensive but do challenge the Colorado on performance, fuel efficiency, and control.