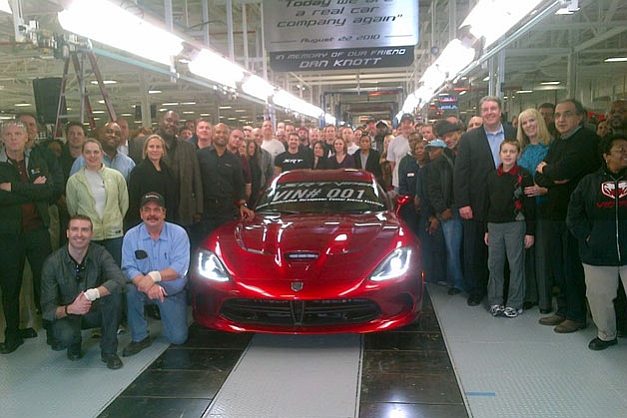 Today marks a big day for MOPAR fans as the Chrysler Group LLC has rolled its first 2013 SRT Viper off of the Conner Avenue Assembly Plant in Detroit, Michigan. Present at the celebration were Chrysler’s Chairman and CEO, Sergio Marchionne, and SRT Brand President and CEO, Ralph Gilles.

The very first 2013 SRT Viper was sold to Scott Thomas, who purchased Viper #001 for $300,000 at the Barrett-Jackson Orange County Auction in California in June of 2012. The proceeds were donated to the Austin Hatcher Foundation for Pediatric Cancer.

During the same moment, the Conner Avenue Assembly Plant’s final line was dedicated to former Chrysler Group Senior VP, Dan Knott, who recently passed  away in 2012.

Prior to the SRT Viper production, the Conner Avenue Assembly Plant was put on halt in 2010 and since then underwent a complete refurbishing.

January 10, 2013 , Detroit – Chrysler Group LLC Chairman and CEO Sergio Marchionne, SRT Brand President and CEO Ralph Gilles, and employees of the Conner Avenue Assembly Plant presented 2013 SRT Viper #001 to owner Scott Thomas during a ceremony at the plant today to celebrate the start of production. Thomas purchased the first production Viper for $300,000 at the Barrett-Jackson Orange County (Calif.) Auction in June 2012, with the proceeds benefiting the Austin Hatcher Foundation for Pediatric Cancer.

As part of Marchionne’s visit to the plant, the Viper team dedicated the final line to former Chrysler Group Senior Vice President Dan Knott, who passed away in 2012, by unveiling a plaque in his honor with the quote, “Today, we are a real car company again.” Knott, who served as Vice President of the SRT Product Team and was instrumental in the development of past generations of the Viper, made the statement on Aug. 22, 2010, the day the 2013 Viper program was approved.

Idled in July 2010, the Conner Avenue plant has spent the past year refurbishing every inch of the 400,000 square-foot facility. Although the plant now looks like a modern, state-of-the-art assembly plant, it still maintains the handcrafted build process that added to the mystique of the Viper when it began production in 1992. Nearly 150 specially-selected employees meticulously assemble each component on 12 vehicles daily with complete attention to detail and quality.

The new vehicle returns to the market with more power and performance from its all-aluminum, mid-front 8.4-liter V-10 engine that delivers 640 horsepower and 600 lb.-ft. of torque, to go along with superior craftsmanship, new technologies and creature comforts. The manufacturer’s suggested retail price (MSRP) for the 2013 SRT Viper model is $97,395 (excluding $1,995 destination).

Production of the flagship performance machine of SRT began on Dec. 5, 2012. Shipments to customers will begin in February 2013 to ensure that every SRT Viper meets the Company’s stringent quality standards before it leaves the plant. 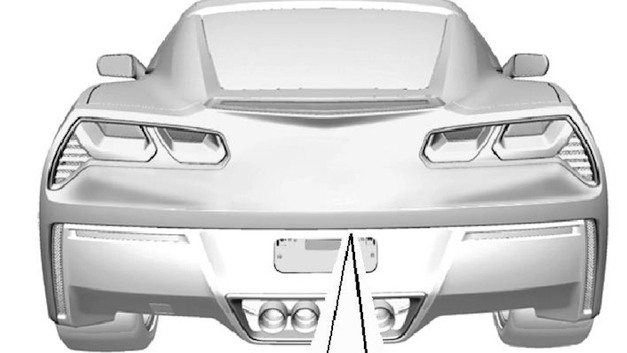 Drawings of the 2014 Chevrolet Corvette C7 hit the web

December 26, 2012 Omar Rana Comments Off on Drawings of the 2014 Chevrolet Corvette C7 hit the web

August 21, 2011 Omar Rana Comments Off on 2012 Volkswagen Up! officially revealed before Frankfurt debut