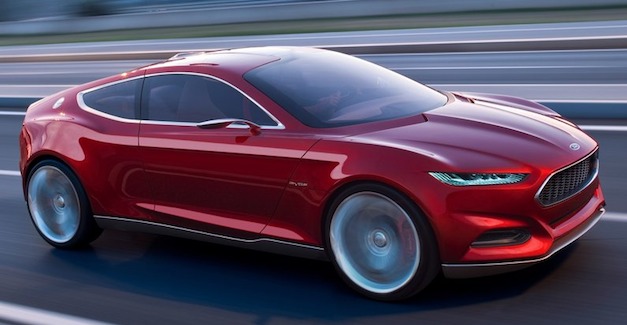 Ford Mustang enthusiast site MustangsDaily.com reports that the rumors of the next generation 2015 Ford Mustang receiving a four-cylinder option is a step or two closer to being true.

According to their finding, forum user “GT_STYLE” at AllFordMustangs.com supposedly said that the rumor of a 300hp+ four-banger is correct. The user then went on to claim that he/she was a member of a market research study team for the next gen Mustang. The engine is most likely to be an EcoBoost four-banger, displacing 2.3L, and capable of producing 310hp while returning 34 mpg.

Supplementing the user’s claims about the engines were supposed descriptions about the new Mustang concepts’ appearance. “GT_STYLE” reportedly said that “the body is very similar to the current body but the sides are formed/indented and the trunk length is smaller. The front was very very cool with a beehive grill. The Mustang logo was centered and about 3 inches from the grill and it had a chrome line/piece going from side to side on either side of the logo.”

The user then became very specific when describing the headlights and tail lamps, “They [the headlights] were little slants, not the traditional round Mustang lights or even close to the current HID style. They [the taillights] are actually louvered and projecting out. Kinda like the quarter window louvers. They are solid red. The traditional third break light on the trunk lid was gone. The third break light is now actually quite large and under the license plate.”

However, there is little evidence to validate that these details are accurate. But considering the current trending climate with many manufacturers switching to forced-induced engines in the name of preserving fuel-economy and high power outputs—including Ford themselves with their EcoBoost moniker—these speculations wouldn’t be too far-fetched.

As for the design description, rumors have already suggested that the new Mustang will take heavily from the Ford Evos Concept. Additionally, yours truly and Editor-In-Chief Omar Rana have both attended exclusive press events where we were legally banned from taking pictures or receiving press information due to the fact that the event was an “exclusive preview” of a current vehicle—which may explain the lack of tangible evidence to support these claims.

Either way, be sure to know that these are still speculative, however they are not by any means too far-fetched. Only time will tell until we hear from the lion’s mouth at FoMoCo.

Honda adding 4-cylinder Accord CrossTour, 2012 Civic and CR-V models on the way

January 7, 2011 Omar Rana Comments Off on Honda adding 4-cylinder Accord CrossTour, 2012 Civic and CR-V models on the way

March 10, 2010 Omar Rana Comments Off on Porsche 918 Spyder to go into production within 5 years