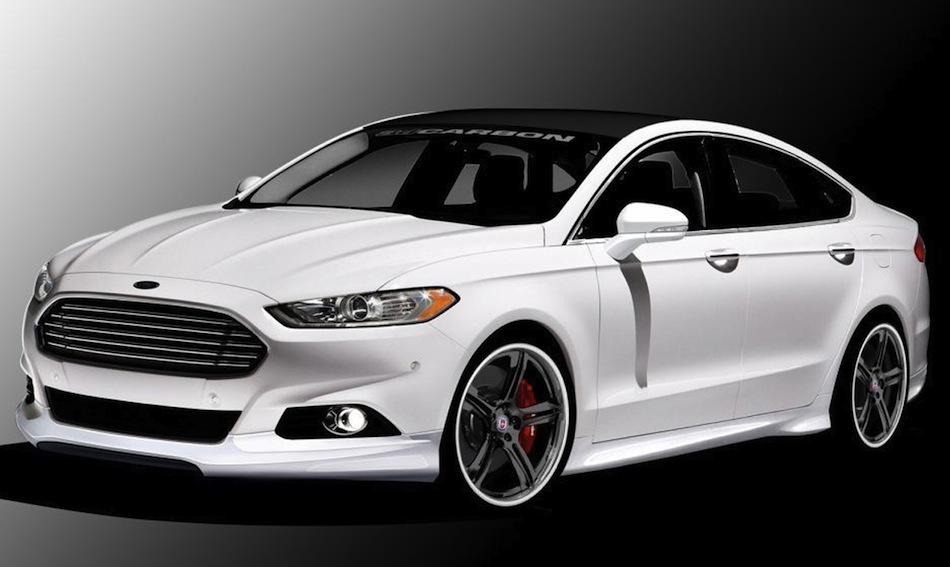 Ford has a bunch of vehicles coming to the 2012 SEMA show including these four 2013 Ford Fusion customizations.

The four Ford Fusion interpretations have been taken care of by Tjin Edition, MRT Performance, Ice Nine Group and 3dCarbon.

Check out more details on each after the jump.

Why it’s cool: The Tjin Edition Ford Fusion is the perfect blend between performance and luxury, modified with some of the best aftermarket products available. The exterior features a custom DuPont Beige paint job, 3dCarbon lip kit, Webasto sunroof, and LightWurkZ headlights and fog lights. The interior has been highly modified by Katzkin interiors, featuring a complete sound system by Scosche Audio. Performance has been upgraded by a Unique Fabrication/ Vibrant turbo kit and custom side-exit MagnaFlow exhaust. Finishing off the Tjin Edition Fusion are a custom set of 21″ iForged Concave wheels, Falken tires, Baer big brakes and Pedders coil-over suspension upgrades.

Why it’s cool: Building on the sporty style of the 2013 Ford Fusion, MRT has prepared a fun and stylish street performer that will catch your eye, while the performance stance and sounds from the Eco-Flow exhaust will keep your attention. When it comes to street performance, MRT will balance styling, chassis, and powertrain to remove any questions that the new Ford Fusion is top choice for sedan customers.

Why it’s cool: Inspired by the V8 Supercar Series, Ice Nine Group’s 2013 Fusion features road race styling and performance for the street. From the slammed race car stance to the cutting edge color and graphics package, Ice Nine’s Fusion not only looks the part it also performs. Drive it to the track, rip some laps and drive home in style!

Why it’s cool: 3dCarbon – Air Design – all new 2013 “Euro Series” Fusion is a perfect amalgamation of style and performance. Inspired by the elegant, sophisticated styling of classic European sedans, the all-new 3dCarbon body kit accentuates the all-new Fusion’s elegant, new silhouette, visually lowering, and transforming it into a striking sedan that would be a head turner on the Autobahn, or any road.

Brand Spankin’ New Images: 2011 Volkswagen Phaeton in all its glory