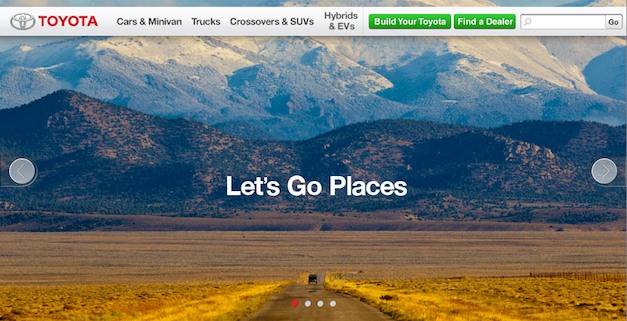 Toyota has a new tagline – ‘Let’s Go Place.’ The automaker announced the new tagline today, which will start appearing into all of Toyota’s national and regional advertising, engagement, communications and digital across all segments in early 2013.

“‘Let’s Go Places’ speaks to the evolution of Toyota and our commitment to leading through innovation, enriching lives and connecting with customers in new ways they define,” said Bill Fay, group vice president and general manager, Toyota Division. “It is energetic, aspirational, inclusive and very versatile. The phrase conveys a dual meaning of physically going places and taking off on an adventure, while also expressing optimism and the promise of exciting innovation that enriches people’s lives. It allows our associates, customers, dealers, and suppliers to interpret it in ways that are most personally relevant to them.”

The company said that the tagline hits the forward-looking and optimistic momentum of Toyota in America.