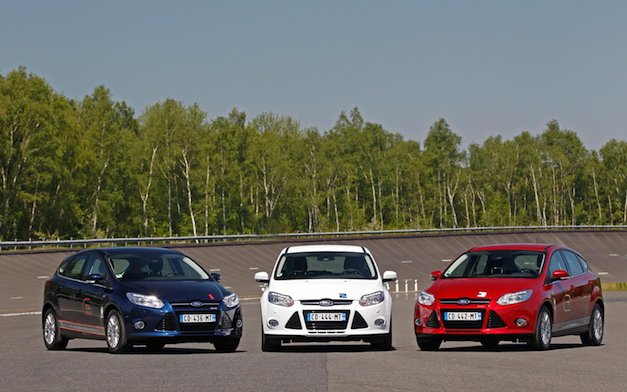 Ford has introduced its new EcoBoost Turbo 1.0-liter 3 cylinder in the Ford Focus only a couple months ago in Europe and has since been very popular, with nearly a quarter of models sold with that engine. Now, its new engine also set 16 FIA speed records using three Ford Focus hatchbacks driven by WRC driver Jari-Matti Latvala. They were all tested at a two day event at the CERAM test circuit in Mortefontaine, France.

Latvala commented on the engine’s performance and agility stating that “…[it] punches way above its weight when it comes to performance…the records prove the [Focus] can be lots of fun—as well as a very frugal car.”

The three hatchbacks, chosen from Ford’s production in Saarlouis, Germany, set records from their engine class including reaching 79.4 mph in the standing mile, as well as averaging 118.4 mph over 100 miles to averaging 103.4 mph over 1000 miles, and from 118.7 mph over the course of an hour to averaging 106.3 mph for 24 hours. The car in European spec reaches 62 mph in 11.3 seconds reaching a maximum of 120 mph and is rated to reach a whopping 47 mpg.

Check out the Focus’s full list of achievements after the jump.

Although the U.S. market may not see this engine in its Focus, we may see it in the face-lifted Ford Fiesta as hinted by Ford’s head of global product development Raj Nair. He noted that it would complement the naturally aspirated 1.6 liter while matching its 120 horsepower rating.

Report: Production Volkswagen Golf R400 could arrive at a festival this year

April 8, 2016 Chris Chin Comments Off on Report: Production Volkswagen Golf R400 could arrive at a festival this year