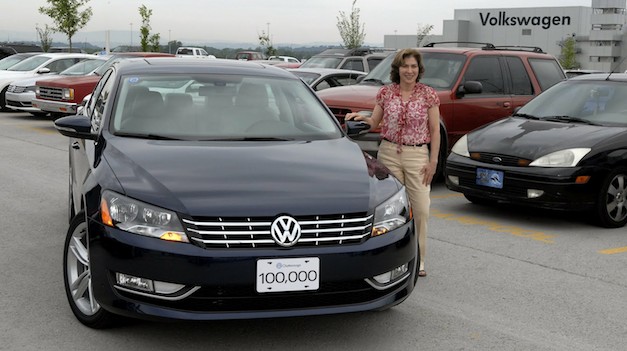 Volkswagen of North America’s Chattanooga factory has reached a new production milestone with the completion of its 100,000th Passat rolling of the assembly line yesterday. The 100,000th unit rolled off the line just 9 months after the new Passat went on stale in the United States.

The car was handed over to its new owner in a ceremony held at the factory.

“We have built each and every one of those 100,000 Passats with a passion for detail that sets the standard for safety and reliability for the mid-size sedan market,” Volkswagen Chattanooga CEO and Chairman Frank Fischer said. “I’m so proud of our team for reaching this milestone so quickly while maintaining the superior quality that earned the Passat the Motor Trend 2012 Car of the Year award.”

Fischer then handed the keys over to Joanne Benante, who had come from Atlanta, Georgia, to take delivery at the factory.

2012 Volkswagen Passat Alltrack – should it come to the U.S.?