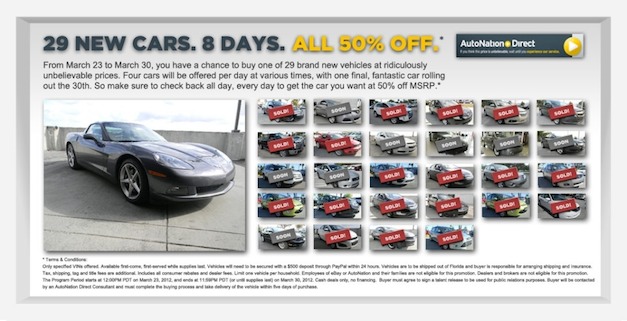 AutoNation Direct has found a great way to promote its online site with posting brand new vehicles on its eBay store at half the price.

Ford, General Motors and Nissan brands are all included in the promotion, which started last Friday, March 23. It will continue until Friday, March 30th, with 18 vehicles sold already. A total of 29 will be going up for sale.

The cars can appear at any time, making it very difficult to get the deal, as you have to see it and bid for it the fastest.

Frey says “We feel we’re ready to introduce ourselves more to the general public, and we wanted to find an extreme way of doing it,” and it appears they have.

eBay generating interest for GM, not converting to sales

August 21, 2009 Omar Rana Comments Off on eBay generating interest for GM, not converting to sales