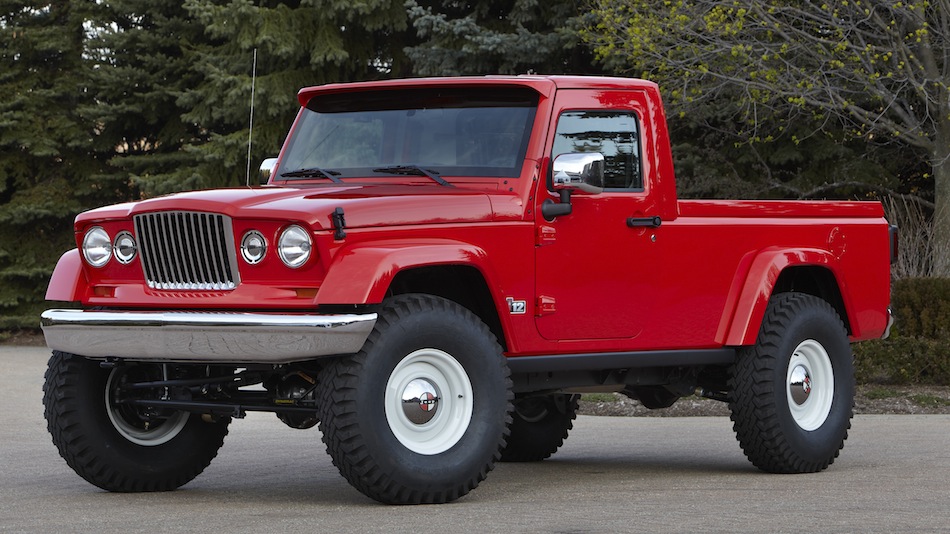 Jeep and Mopar have unveiled their onslaught for the annual Easter Jeep Safari in Moab, Utah. The brand teamed up with Mopar to create six new vehicles, all of which feature a host of Jeep Authentic Parts and Accessories.

“We’re delighted to showcase six new vehicles to our loyal Jeep fans at this year’s Moab Easter Jeep Safari,” said Mike Manley, President and CEO – Jeep Brand, Chrysler Group LLC. “The Jeep Safari has long been a great way for Jeep to connect with its core audience. We look forward to spending the week demonstrating our latest potential production and customization ideas and gathering instant feedback from the most knowledgeable 4×4 enthusiasts in the world.”

Since 2002, Mopar and Jeep have teamed up to create more than 30 unique concept vehicles who attend the Easter Jeep Safari.

Check out the list of concept vehicles after the jump.

Visually, while the vehicle is featured in Stone White, a Mineral Gray and Red theme is highlighted throughout. Specifically, the grille surround, lower front applique, mirror caps and rear light bar join the wheels in Mineral Gray, while contrasting in eye-catching Red are the upper grille mesh, front and rear tow hooks, Jeep logos on wheel center caps and bolt holes in the alloy wheels. A Red trim line outlines a matte black hood applique that is utilized to reduce glare during technical off-road maneuvers.

Other unique touches include black headlamp surrounds, black exterior front and rear badging, Red “Trail Rated” badges on the front fenders and a unique “Trailhawk” badge on the rear tailgate.

2012 Jeep Wrangler Apache from Mopar
Jeep enthusiasts have been asking for a V-8 powered Jeep HEMI Wrangler, and Mopar is coming through. Debuting at the Easter Jeep Safari will be the new Mopar 6.4-liter HEMI V-8 engine conversion kit specifically for the Jeep Wrangler. Producing approximately 470 horsepower and 470 lb.-ft. of torque to the rear wheels, the Mopar V-8 conversion kit gives Jeep enthusiasts an unprecedented blend of power and capability.

Jeep Mighty FC Concept
The Jeep Forward Control was built from 1956 to 1965 and offered a clever packaging solution.
It kept overall length at a minimum for maneuverability but maintained a full-length cargo box for utility. For 2012, Jeep has created a modern version of this classic: the Jeep Mighty FC concept.

To create the Jeep Mighty FC concept, the design team started with a 2012 Wrangler Rubicon and repositioned the cabin over and ahead of the front axle, lengthened the wheelbase, and added a custom built drop-side cargo box. The cab utilizes a roof from the Mopar JK-8 conversion kit, as well as a custom-designed front clip. The Wrangler-based interior has been enhanced with bold, heavy-duty Katzkin leather and a unique color scheme. The cargo area is handled by a full-width, drop-side tray-style bed that measures more than eight feet in length.

Jeep J-12 Concept
The Jeep J-12 concept is essentially an extended version of Mopar’s recently introduced JK-8 pickup conversion kit for the Jeep Wrangler. With a new 2012 Wrangler Unlimited as the starting point, the rear of the vehicle’s frame is extended 18 inches, allowing the spare tire to be relocated under the bed floor and making the cargo box a full six feet in length. A custom hood and front fender set was created as a nod to aficionados of the beloved Jeep Gladiator series trucks.

The cabin of the J-12 concept has been “dressed down” in support of a basic truck theme, with the carpet being replaced by rugged truck bed liner, and the bucket seats re-crafted into a modern version of a bench seat, trimmed in white with a whimsical plaid pattern.

Some prototype Mopar accessories debuting on this vehicle are a locking center console box, a rear cargo cubby cover, new windshield-mounted LED lamps, a new hard-top headliner and an “Add-A-Trunk” partition that creates secure storage space in the cargo area.