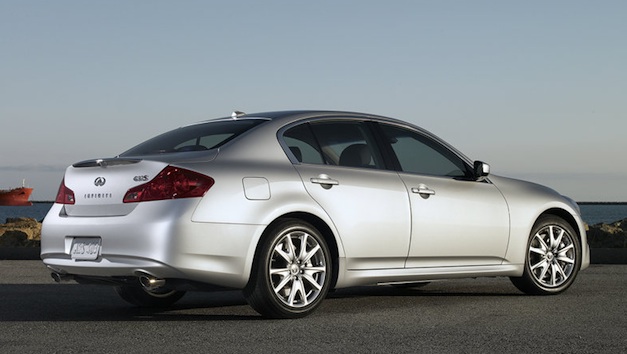 Some new reports are out regarding Infiniti’s proverbial BMW 3-Series fighter, the G sedan. Not to long ago, Infiniti chose to add another powertrain option to help diversify the lineup some more: a detuned version of Nissan’s VQ V6. Now though, these new reports are saying that Infiniti has just trademarked some alphanumeric nomenclature badges, which could give us some hints as to what the next Infiniti G lineup could consist of.

Other than the coupe, convertible and sedan variants, these new badges imply new powertrains. The first is “G35h,” which considering Infiniti’s widely-known plans with experimenting and planning hybrid powertrains, suggests that for the first time, the G lineup will have a hybrid model. The concept is believed to be modeled after the M Hybrid’s electrically assisted 3.5L V6 and will be the most likely addition to the G lineup.

Next, is the “G30t.” Now right off the bat, some of you might think that this could denote a touring wagon version of the G, which would certainly make an interesting proposition. However, the chances of that happening give way to the greater likelihood of a small, turbocharged engine to compete against the now, four-cylinder turbocharged, base BMW 328i. And that’s suggested by the “G30t’s” lesser numbers. Either way, only time will tell on this one.

Lastly, is the badge “G22d,” and immediately I can sense the enthusiasm from fans of good ‘ol fashioned oil burners—like me. As we’ve learned from Infiniti’s emergence into the European market, all of their diesel models are succeeded by a little “d” to signify their iron hearts. Though Infiniti still has yet to be clear as to whether they’re going to introduce their diesel models to the US market or not, it’s safe to assume that this could be their first foray. And judging by the numbers, it could be a small engine displacing only 2.2L.

Although full details have yet to be disclosed, there’s also sufficient reason to suggest that the recent partnership with Mercedes-Benz implies that Infiniti could be using Mercedes-Benz powerplants in models other than the hybrid, especially the diesel engines—which of course, Mercedes-Benz are famous for.

Either way, the current generation G lineup is beginning to show its age and there’s not much reason to doubt that it will receive a comprehensive rework. The real question however is when and some say that a new G will pop up around 2014.

June 1, 2012 Omar Rana Comments Off on Carroll Shelby fans around the world pay tribute with a ‘moment of noise’