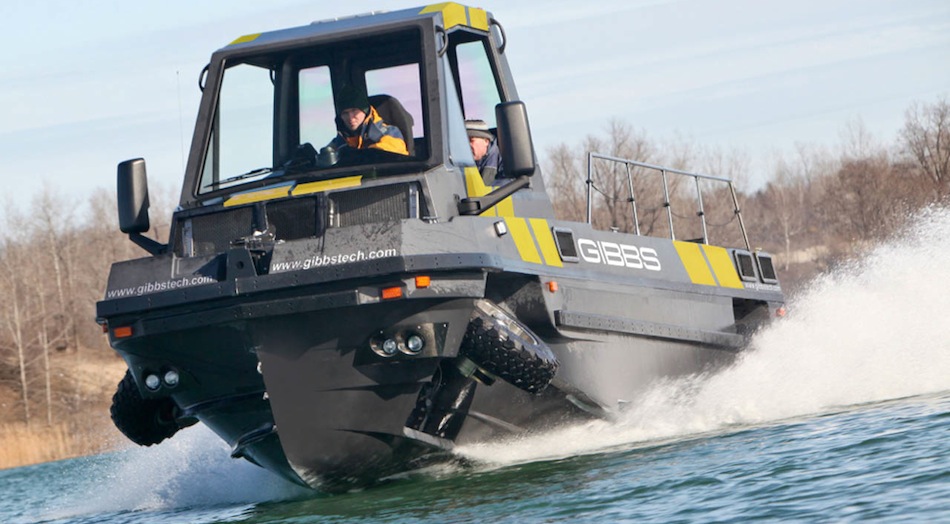 A new pair of high speed amphitrucks has just been revealed by Gibbs Amphibians called the Phibian and Humdinga.

Both are commercial vehicles designed to work both on- and off-road, and have the capability of transporting many passengers, useful for transport, military use and first responders. The models are configurable to meet varying sets of specifications, and come equipped with easy adjustments between cargo and passenger spaces.

Gibbs implemented its High Speed Amphibian technology into the Phibian and Humdinga II models, which allows speeds of up to 30 mph in water, and highway speeds on land. Both models also have retractable wheels allowing transition to and from water, which can be accomplished with the push of a button in 10 seconds.

The Phibian model is just over 30 feet long, made mostly of carbon fiber and comes equipped with twin turbo diesels for land and twin jet drives for water, and puts out 500hp. It holds up to 12 passengers with up to three crew members.

The Humdinga II was crafted to handle tough terrain and remote locations, and is a smaller model, at 21.5 feet in length, with a 7 passenger maximum capacity. It is powered by a supercharged V8 motor that gives all four wheels a total of 350 hp.

“Natural disasters in recent memory, such as the earthquake and tsunamis in Japan, Thailand, Sri Lanka and elsewhere in Asia; as well as the devastation of Hurricane Katrina in New Orleans, illustrate the need for amphibians as capable, versatile and efficient as Phibian and Humdinga,” Jenkins said.

Ferrari 458 Italia owner drives Fiat 600 off the road, beats driver up for not allowing to overtake him