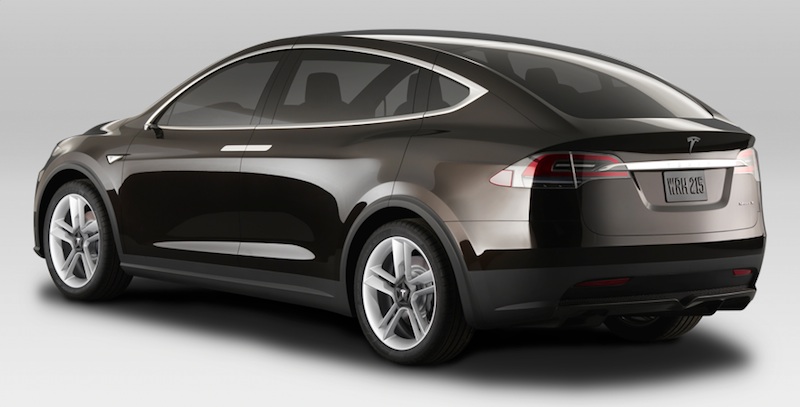 Here is the moment all of you electric-car fans have been waiting for so far this year – Tesla Motors has just unveiled its new Model X crossover – “a vehicle it says blends the best of an SUV with the benefits of a minivan.”

Based on the same vehicle platform as the Tesla Model S sedan, the TVP (Tesla Vehicle Platform), the Model X actually turns out to be sport crossover with a low center of gravity and nimble tight handling. Obviously, the torque from the electric power train helps assist in some aggressive lane changes.

The 7-passenger Tesla Model X comes standard in rear-wheel-drive but the company does offer an optional Dual Motor all-wheel-drive architecture. The second motor increases torque by 50% and allows for all-road and all-weather capability. With AWD, the Tesla Model X Performance version can run from 0 to 60 mph in less than 5 seconds – that’s sports car performance right there.

The Tesla Model X will be available with two battery pack versions including a 60 or 85 kWh battery allowing for a range of up to 300 miles (for the 85 kWh model).

Before you get inside the Tesla Model X, it’s the way you open the rear passenger doors that will probably turn some heads. Known as ‘Falcon Doors’ the doors open up and out (even in tight parking spots) allowing you ample room to just step inside the all-electric crossover. Once you’re inside there easy third-row access and quite a bit of room for a total of 7-passengers. The driver seat is the most stylish with a Tesla Touchscreen 17-inch, high-res, multi-touch display and a high-res speedometer right in front.

The Tesla Model X will enter production in late 2013 and will start being delivered in early 2014. When you can order yours? Today, if you’re sold on it. The Model X will be priced comparable to a similarly equipped Model S but the company will give out more details as production nears.

Review: 2011 Kia Sportage is ready to take a big piece of the CUV pie