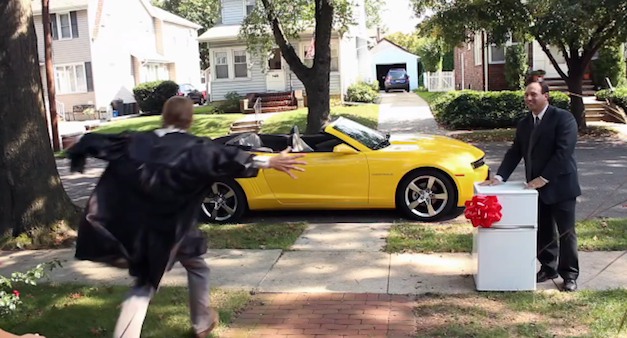 The “Chevy Happy Grad” ad submitted by 26-year old Long Island resident Zach Borst is going to the Super Bowl. The commercial beat out other submissions by independent filmmakers from around the world as a part of Chevrolet’s Route 66 Super Bowl ad contest for Super Bowl XLVI.

“We asked filmmakers to depict life’s journey and how Chevrolet is there along the way,” said General Motors Global Chief Marketing Officer Joel Ewanick. “When I saw Zach’s spot, I had to laugh, because the situation is something many families can related to – expectation and reality. ‘Happy Grad’ clearly shows the passion that Chevrolet elicits.”

Brost’s ad is expected to exceed more than 110 milion television viewers during the Super Bowl.

“My Dad was a cop and worked real hard to be able to buy his kids their first cars. They were used, but mine meant the world to me,” Borst said. “Then I wondered what it would look like if I got a brand new Camaro? I mean, after all, who wouldn’t want a Camaro as a graduation gift?”