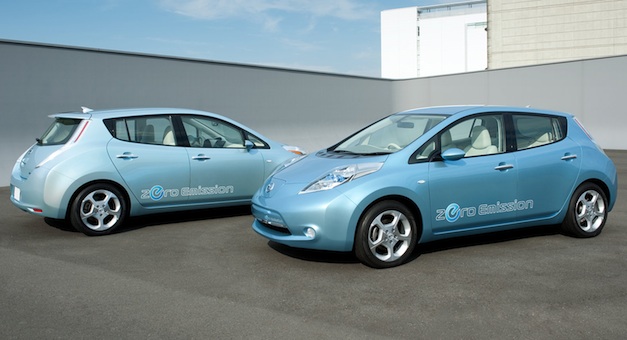 After egmCarTech’s trip to the 2012 North American International Show, we walked away with a little bit of an epiphany. But before I get to that, we were expecting there to be a huge influx of new cars with alternative powertrains. In other words, I personally was expecting every make to be pitching their push forward towards electric and hybrid powertrains.

But to my surprise, there weren’t. And that raised some questions. Ever since Chevrolet introduced the Volt and Nissan brought about the LEAF, I thought I’d be confronted with a great number of concepts with brands bragging about how EVs are the future and how everyone was jumping on the bandwagon. But some countering examples include Mazda, who just unveiled the CX-5 crossover, which is said to get up to 35 mpg on the highway. Then Ford’s stand was heavily pitching their EcoBoost lineup, both of which were suggesting that greater fuel economy is still better achieved by gas engines instead of alternative powertrains. Does this mean that the electric car craze was short lived? And apparently, we’re not the only ones wondering where electric cars are going now that they’ve been on the playing field for almost a year. Some journalists think that the electric car craze is “fading into the background.” Analyzing the current situation is one of egmCarTech’s latest additions, Sawyer Sutton, with his piece of mind.

Check out his two cents after the jump. And of course, we here at egmCarTech encourage our readers to engage in discussions and debates in the comment section below. So, without further adieu…

With expected sales of the Nissan Leaf to approach the tens of thousands in the coming years and direct injection gasoline engines, I cannot help but jump into the EV versus gas brouhaha. As we’ve seen at the Detroit and LA Auto shows, many gas powered cars are impinging on economy formerly reserved for hybrids. Naturally some journalists are lauding the success of gas engines (a well-established method) over electrics (a perceived novelty). It isn’t that simple.

First, the argument that gas engines trump hybrids and electrics from an economic standpoint is a bit provincial in nature: the rest of the world knows about diesel engines, which are far and away much more efficient than gas engines. Diesels are comparable if not more efficient than most hybrids. There is an issue with this though that I will get to soon. The closest we as Americans have come to a small, efficient diesel commuter car is the original Honda Insight Hybrid (70 mpg). Little VW Lupos etc. grow on trees in Europe and get similar results.

Why aren’t they offered here? A), the Lupo is not safe enough to sell in an American world of SUVs, light trucks and semis. B), if we couple the unsafe factor with the artificially high cost of diesel in the US, it’s tricky to see why VW would sell them here. C), this is a bigger issue than the Lupo, or the lot of tiny cars on sale everywhere else: there is not enough diesel in the world to allow the US to switch to diesel.  Pretend you are making a loaf of bread and have poured oil, maple syrup and water into a glass bowl, there are of course three layers according to the different densities. When heated and refined, crude oil behaves the same way: one of the many layers is gasoline, one is diesel, one is kerosene etc. The long and short of it is that the US uses 40% of the world’s gasoline supply, and the oft-quoted 25% of greenhouse gases. There is no capacity for that to switch to diesel, so in an effort to keep fuel prices down, there are transitional solutions like hybrids and EVs to chip away at the expanding demand.

Second, the additional wrench to be thrown into this mess is that China’s quickly emerging car culture/market is heavily gasoline based. Meanwhile finite oil resources are being mined quicker than ever, making companies like BP who make solar panels and gasoline resort to environmentally damaging and frankly expensive technologies like tar sands oil extraction.
I think you might see where this is heading: gasoline engines whether you love them or not have a limited time on this planet whether you live in the US or Uganda.

Third, EVs and hybrids have their own set of perhaps equally damning issues the least of which is not the fact that the car has traveled half a million miles around the world before it is assembled and in the hands of a consumer before it gets thrown away at 250,000 miles. Sure, Americans are much more guilty of treating their cars like disposable cameras than most developed cultures, but the cost/benefit of refilling a hybrid with batteries every 7 years or so is questionable. The added complexity of the hybrid powertrain does add efficiency, but it also means another $3-$5 thousand lump to be replaced like one might replace an engine or transmission. Volvo has a 124 mpg diesel hybrid costing over $70 grand because at this point it’s a marketing experiment. Is this too part of the solution? Maybe if we find a way to make bio diesel from algae (one of the most efficient ways).

Four: Electric cars are powered with essentially laptop batteries (lithium ion), if you have replaced the batteries on your laptop or even your smartphone, it is not cheap. There is a good reason for that and it doesn’t have to do with profits: disposal of batteries is only a little bit more fun than disposing of spent nuclear fuel rods, totally unrenewable and unsustainable. That is their Achilles heel, but if gasoline jumps to $15/ gallon in the future, electric owners aren’t going to be the ones fretting.

Coming back to the original argument of electrics being a novelty; they aren’t, they are here to stay in some form or another. The argument itself is very narrow minded because it covers a small gap in our automotive history. Extracting hydrogen is tricky and while it is not a silver bullet that will save us all, it may play a significant role in the future. Fuel cell hydrogen cars are at some level of course, electric.

So where does that put us? Our lifestyle needs to change significantly. The US fixation on conspicuous gasoline consumption has done no favors to the cost of air travel, something that really needs fossil fuels at this point. Battery powered planes, hydrogen powered planes or nuclear planes, no thanks, it’s just like having a plane with no human pilot. Your Aston Martin that you drive 1,000 miles a year is not killing polar bears in the Arctic, nor is the fetid snowmobiler that pulled right in front of my car as I was driving down the snow covered hill today, it’s our lack of legitimate public transportation and our unwillingness to walk and ride bikes when it is reasonable. I know this makes me sound like I am a bearded vegan socialist from Vermont who enjoys using a fair trade and organic composting toilet only after grazing over crunchy granola and lightly killed soy milk, but the fact of the matter is that my ideal garage would be filled with massive earth moving equipment, old European cars and prewar American cars. I am merely being realistic in terms of our environment and how much it costs to continue our car culture.

October 2, 2008 Omar Rana Comments Off on Pininfarina B0 shows up in Paris with 150 miles on a full charge

November 22, 2010 Omar Rana Comments Off on Wheego LiFe EV waiting for EPA approval, 5-passenger EV and pickup in the works