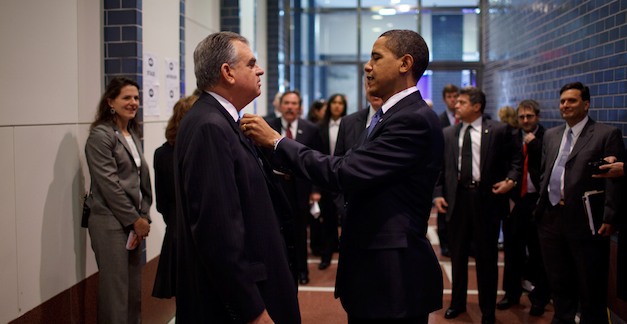 A week ago, states were asked by the National Transportation Safety Board to bar phone calls from drivers using any type of portable device. While the request included hands-free devices, it excluded systems like OnStar that come installed as part of a vehicle. Recently, Ray LaHood, Transportation Secretary, stated that he is not in support of the NTSB’s proposal, stating that “The problem is not hands-free.”

LaHood feels the issue lies with people making hand-held calls, and automakers are agreeing. Chrysler Group LLC and Ford Motor Co. are both backing LaHood’s statement. After the industry has sunk billions into Bluetooth systems and the like, it’s certainly understandable.

“Anybody that wants to join the chorus against distracted driving, welcome aboard.” LaHood said. “If other people want to work on hands-free, so be it…We need people to take personal responsibility. Put the cellphone in the glove compartment.”

So far 35 states have a ban on texting in place, with 9 banning hand-held cell phone usage, but no state has banned hands-free.

The NTSB argues that “While it may not be the popular recommendation, it is the safe recommendation.” NTSB chairwoman Debbie Hersman said on C-SPAN this week. She also added that “hands-free is not safer than hand-held in many circumstances.” Hersman also added that an event is being planned for next year to further evaluate the safety of built-in vehicle technologies.