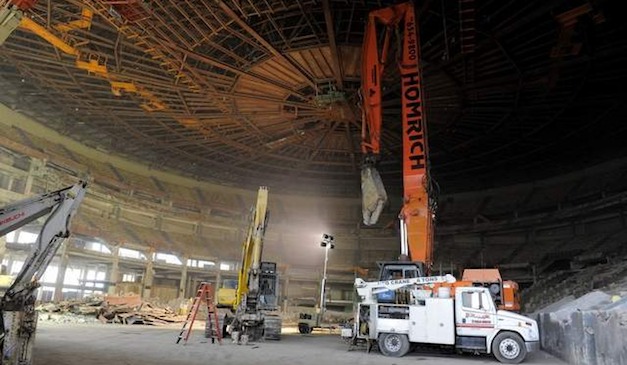 The Cobo Center, host to the upcoming 2012 North American International Auto Show is expanding just in time for the event, providing 25,000 additional square feet to fill with the industry’s latest.

While crews make their final efforts on the expansion and renovations, the center’s officials provided a tour on Tuesday to journalists to preview what’s in store.

Total renovations began back in 2009 when the Detroit Regional Convention Facility Authority took over, expanding and reworking the usable space to increase it by over 100,000 square feet; with this last one marking the final step for major updates.

Changes include an expansion of the loading dock to provide easier access and cut energy costs, lighting improvements with detailed setups for the Auto Show, and the addition of a food court.

The lighting company PRG is being managed by Patrick Stansfield, who notes that lighting is a key component to a successful auto show. He says “What were trying to do is be very exact in our engineering. Unlit cars are not very interesting. Unlit cars look like cars in a parking lot.”

As for parking lots, the Cobo Center’s was not overlooked in the expansion, as 400 parking spaces have been added, also.

5 Saudi women in jail for driving, Hillary Clinton provides her support for the uprising

July 1, 2011 Omar Rana Comments Off on 5 Saudi women in jail for driving, Hillary Clinton provides her support for the uprising

Man buried in the bed of his 1967 Chevy pickup