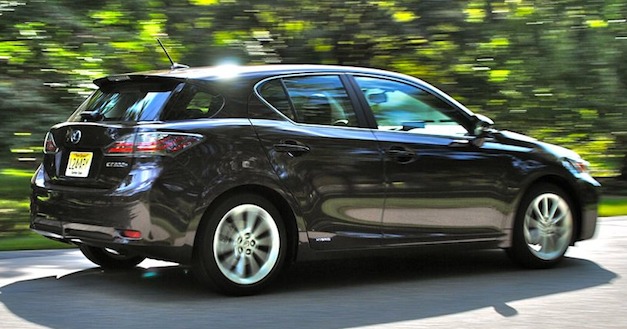 Growing up along with Lexus and being an enthusiast, my perception of the brand is that they make cars that are as smooth and luxurious to drive as they are boring. And with Lexus’s parental giant, Toyota, being the forefront of efficiency and hybrid powertrains, both Toyota and Lexus are looked down upon by the enthusiast as being the antithesis of all things petrolhead. That’s not to say that they make terrible cars, but ones that speak way too much to the average consumer rather than the enthusiast.

Lexus currently has five hybrids in its lineup with the CT 200h being the fifth. And altogether, Toyota in general has sold more than 500,000 hybrids last year. So ToMoCo, and specifically, Lexus is no stranger to the hybrid world. I mean, they started the industry for Pete’s sake. But how many of those buyers do you think were enthusiasts? Usually when you equate hybrids to their demographics, you think plain Jane, average Joe and of course, tree huggers.

All sorts of people who would seemingly opt for the basic ham and cheese on Wonder bread rather than the more exquisite slow baked, hand-carved open face leg of glazed ham panini with a honey-Dijon reduction aioli. And if anything, the only Lexus that currently has a sporty reputation is the IS and LFA. So when I was told that we were going to be behind the wheel of the cheapest Lexus of them all, I was expecting to be driving a gussied up Toyota Prius despite Lexus’s words that the CT200h offers exceptional fuel economy and a dynamic driving experience. However, Honda has showed the world that hybrids need not be boring with the CR-Z. Can it be the same case for the Lexus CT200h, which happens to currently be the only car of its kind? Well, let’s find out. 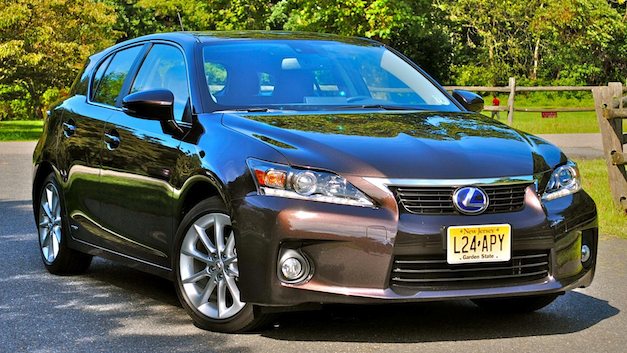 [quote float=”left”]…the CT 200h looks far more aggressive than Lexus’s of the past and even the current.[/quote] Anyone who knows Lexus is familiar with their tendency to design cars very conservatively and anonymously. But the same cannot be said for the Lexus CT 200h. Admittedly, the first thing that came to mind when looking at Lexus’s first ever hatchback was that it resembled Jabba the Hutt from the front. And that’s thanks to the CT 200h’s sharply angled hood and upright windshield. Also, our tester’s brownish “Fire Agate Pearl” paint didn’t help. But the CT 200 isn’t as nearly as ugly as the fictional Star Wars character. In fact, the CT 200h’s design also came across as a more upscale Scion, which already has achieved some decent success thanks to their hip and futuristic-looking designs. And that’s a good thing because it has more presence than most Lexus models would have otherwise.

Either way, with those hints from Scion, the CT 200h looks far more aggressive than Lexus’s of the past and even the current. It’s proportions are similar to that of the Mazda3 hatchback, which already has a pretty sporty appearance. But the CT 200h is a much cleaner design and that gives the CT 200h the title as being the most youthful looking car to ever come from the brand. 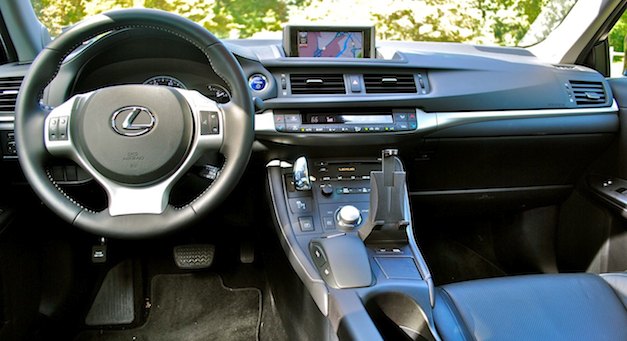 While Lexus did a more than adequate job at separating the CT 200h’s interior from its lesser Prius cousin, it was still obvious though that the CT 200h was the cheapest Lexus in the lineup. And that’s a given. In terms of design, quality of materials and build quality, the CT 200h is definitely much more upscale than the Prius that inspired it. However, it was a bit of a surprise to find such low rent plastics when compared to Lexus’ reputation of offering the complete opposite.

[quote float=”right”]…it was a bit of a surprise to find such low rent plastics when compared to Lexus’ reputation of offering the complete opposite.[/quote] You could tell that Lexus attempted to maintain their build quality in the CT 200h, but it was only noticeable on select interior parts. For instance, the gearshifter, which is essentially lifted from the Prius, is fitted with a chrome handle that’s actually a treat to the eye. Nonetheless, you could tell that its purpose was to overshadow the rest of the cheap low rent plastic that embodied the center console’s controls.

As usual, ergonomics and equipment are top tier, something that Lexus has been known for. Our CT 200h came equipped with Lexus’s navigation system that features their new mouse-like controller pad on the center console. And with the CT 200h being my first encounter with the controller, it is by far the easiest to operate out any other offering from any competitor. But the biggest highlight was the driving position, which mimics that of a low-slung sports-coupe giving the CT 200h a sense that it is Japan’s version of the GTI. 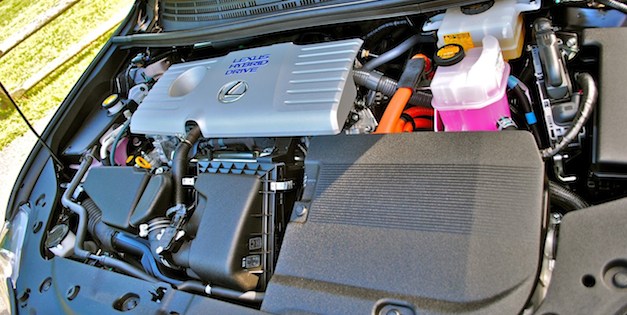 But a Japanese Volkswagen GTI is something that the CT 200h is not when it comes to driving. Because the CT 200h’s hybrid powertrain is basically a carry-over item from the Toyota Prius, that means the CT 200h is powered by Toyota’s internally dubbed 2ZR-FXE 1.8L VVTi four-banger that’s good for 98-hp and 105 lb-ft of torque. Assisting the power delivery is a 1.3 kWh nickel-metal hydride battery that powers an alternating current permanent magnet synchronous electric motor—whatever any of that means. The result from the electric motor is a maximum output of 80-hp. Altogether, the combined power rating is 134-hp and 153 lb-ft of torque, which is all channeled through a boring-riffic CVT transmission. Not exactly the choice when Lexus clearly claims in their press release that the CT 200h offers a dynamic driving experience. And with the Lexus weighing in at just 3,146, it’s not exactly fast as 0 to 60 mph comes in at just 9.8 seconds. But then again, the Lexus CT 200h isn’t all about power.

Sitting smack in the middle of the center console where the gear shifter would be on a normal car sits a center dial, which offers three driving modes—Eco, Normal, and Sport. The driver can select each of these modes to cater to certain situations. In my observation, there was very little difference between Eco and Normal modes. Interestingly enough, the CT 200h also offers an EV mode, which can be selected via a button that sits just to the left of the mode selection. And to me, it was a bit useless because the CT 200h only offers EV mode up to a mile’s distance and a top speed of 26 mph. Not to mention, any growth from your toenails would trigger the engine to boot right up again. The most decipherable difference in driving modes came with Sport. Turn the dial all the way to the right for the latter and the gauge cluster changes color from its normal blue-lit background to red while the dancing “Eco meter” changes into an all out tachometer. Sweet! Not much else happens though. The electrically assisted power steering becomes heavier and the throttle response increases, but only slightly. Either way, nothing can hide the 9.8 second 0-60 time.

The upside to all of this performance numbing, fuel-sipping technology: according to the on-board trip computer, I was able to clock in at about 35.6 mpg after a variety of driving and a round trip to New York City. Not quite the combined 42 mpg figure given by the EPA, but not terrible. Then again, because the CT 200h was down on power, I did find myself doing quite a bit of wide-open throttle. Keep in mind, I’m coming from daily driving a 2011 Honda Accord V6 that’s nearly twice as powerful.

[quote float=”left”]…when you do push the CT 200h, the results are very surprising as to what the CT 200h can do.[/quote] Thanks to an outrageously stiff chassis and quick steering, in pretty much any mode the Lexus CT 200h encourages you to turn your local shopping mall parking lot or city streets into your own little autocross. Body roll is is near non-existent and the CT 200h dances around enough to elicit handling confidence. Ride quality is top notch as well and around town, the CT 200h exemplifies and excellent blend between ride quality and handling. It’s enough to force you to think that, maybe you’re not in a Lexus of the past. But unfortunately, these characteristics are only best observed at low speeds.

The steering is quick and well weighted but offers nothing in terms of feedback. Quicken the pace on your favorite backroads and any thoughts that you might no longer be in an old Lexus completely reverts back. The the CT 200h feels to be too flat in the corners. You might be thinking: is that even possible? Yes. In fact, the CT 200h is so flat that it isolates the driver from what’s actually happening at the wheels and through the chassis when pushed to the limit. Additionally, the CT 200h responds as if its suspension tuning is completely overwhelmed by the increase in speed. The slow 0-60 time tells you that the Lexus CT 200h is more about handling and economy, which still, in the same sentence is like trying to mix water with oil. The decrease in handling prowess as the speed builds up also says that Lexus didn’t fully take advantage of the stiff chassis that the CT 200h was given. 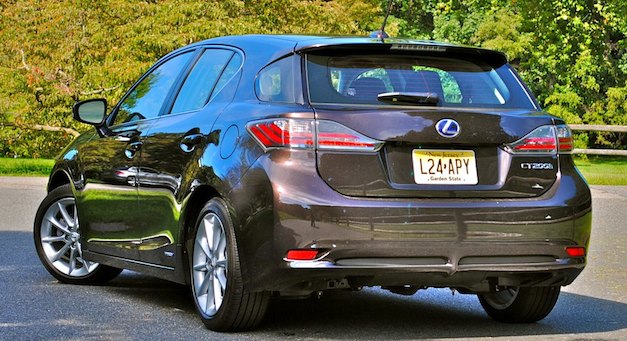 Altogether, these downsides aren’t of much surprise as we know, Lexus and Toyota are just beginning to reinvigorate their automobiles with a little more precision in performance to match the best efforts from Europe. And to add, the Lexus CT 200h is a very unique car with very little in terms of competition. The closest automobile we’d choose here to compare is the Audi A3 TDI diesel. And because the Lexus CT 200h can currently be considered a niche automobile, we’re not sure if it would be our top choice for a fuel efficient luxury sport hatchback. To say the least, the new Volkswagen Golf TDI with a six-speed manual proved to be far more engaging and entertaining and much better built than the Lexus CT 200h, which starts at nearly $6,000 less than the CT 200h’s base price. And you could use that $6,000 for a lovely family vacation or getaway with the wife.

That said, because the Lexus CT 200h is the first of its kind, we’re not sure if it’s going to be a top seller, especially since Lexus’s parent Toyota offers hybrids for a much lesser price and those looking to save money usually don’t opt for luxury cars period. Lexus recognizes this themselves as they are predicting to move a humble 12,000 units a year. And because the CT 200h is the first of its kind, introducing a new specific niche market demands a car that will be good at all aspects. That’s not to say that the Lexus CT 200h is a bad car. But it doesn’t exactly appeal entirely to either of the groups that it was otherwise intended to cater to: gas-sipping frugal money savers, dynamic driving enthusiasts or both. But if you’re a fuel miser that favors the impeccable reliability and refinement of the top-tier Japanese brand and want a little excitement in the mix, then look no further than the Lexus CT 200h. 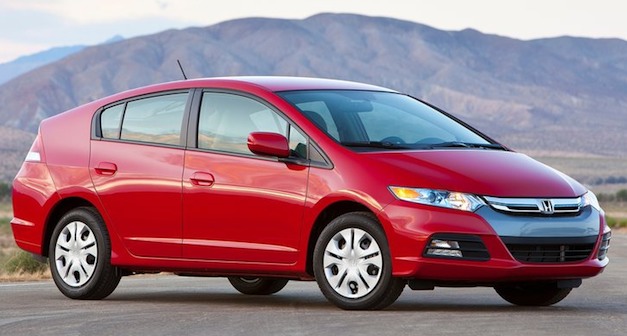 Report: Honda euthanizes their Insight and kills the CR-Z

February 26, 2014 Sawyer Sutton Comments Off on Report: Honda euthanizes their Insight and kills the CR-Z