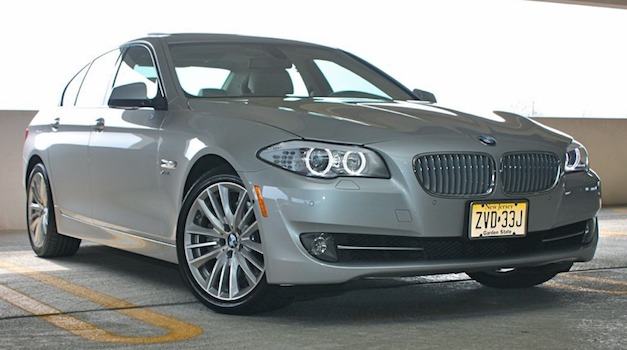 Let’s say you’re a young middle-aged man who’s moving up in the world. You’re ready to graduate from the jalopy that got you through college and the first couple years of your career. You have a need for extra room to occasionally shuttle colleagues back and forth from business lunches to conference meetings, but you don’t want to succumb to the wallpaper paste of mainstream Japanese sedans. Yet, you also yearn for driving pleasure and luxury for those longer trips. Ideally, you’d beeline it straight to the BMW 5-Series and rightfully so because of its legendary compromise of practicality, luxury and driving performance.

But almost 40 years have elapsed from when the first BMW 5-Series was released and since then, has gained more size and weight than a woman going through pregnancy. And what we have in front of us is the latest iteration of one of the best mid-sized luxury sports sedans money can buy. Does it have what it takes to live up to the legacy and remain the standard? Let’s find out. 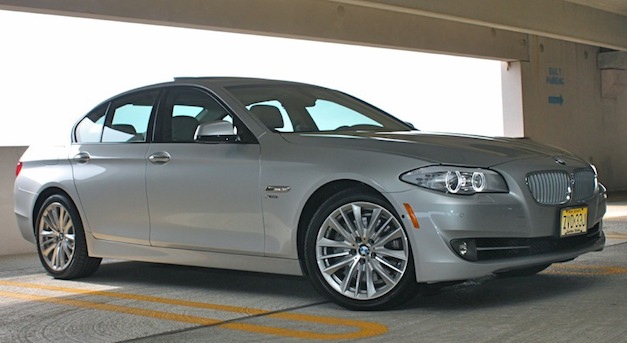 The last 5-Series, dubbed the E60, was a controversial one because of the back-then relatively new iDrive system and its looks. With a face that looked like Edna Everage’s eye wear and enough junk in the trunk that has earned its name in history as the “Bangle-butt,” the E60 definitely had presence. Though, that’s not necessarily a good thing…ask anyone who has gold teeth.

The hood is festooned with protruding creases, giving the 2011 BMW 5-Series an aggressive look. The rising shoulder line and creased doors mimics that of the current 3-Series – in fact as a package, the new 5-Series looks like an elongated E90 3-Series. Although the 3-Series looks a bit pudgy at certain angles, the larger proportions of the 2011 5-Series make far better use of the design cues. It gives of a sense of elegance and just enough muscle that’s by far more sophisticated than the outgoing model. And don’t be mistaken, this is a big car. 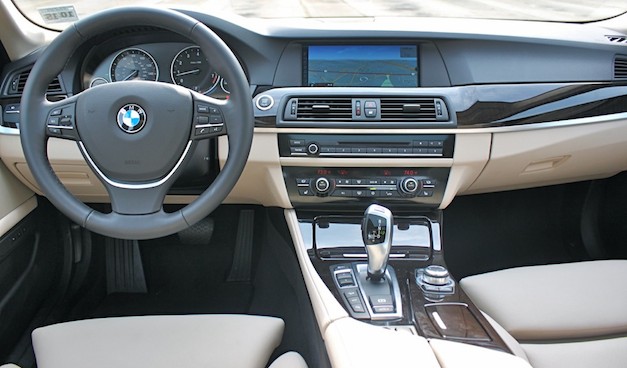 Inside, you’re greeted with leather galore with hints of real aluminum and piano gloss finished wood. Gone is the bulbously curved dash, which in return goes back to a driver-oriented center console inspired by BMWs of the past. It is mounted further away from the front occupants making the 5-Series feel just as big as the exterior suggests. You feel less like you’re cocooned in the cockpit of a rocket ship like in the old E60.

The 18-way sport seats are comfy but aren’t as supportive as Bimmer La-Z-Boys of the past. Buttonage is well-organized and kept to a minimum with the most important functions such as radio volume and basic HVAC controls being the most prominent. The ergonomics are well thought out for a clean look and ease of use. The iDrive screen is much larger at 10.2 inches and receives a high-definition screen but is still a bit challenging to learn right off the bat, even if you are used to BMW’s infotainment system. 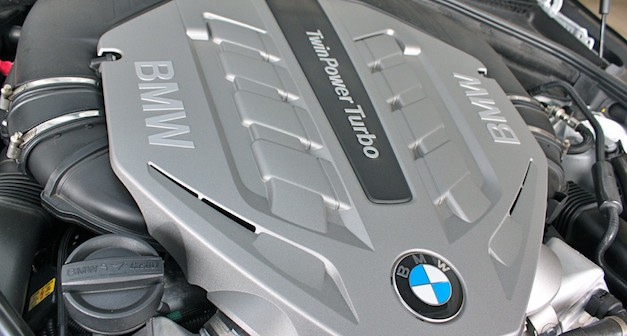 Now for some fun stuff. Our 2011 BMW 550i xDrive tester was equipped with BMW’s new 4.4L twin-turbo V8, coded the N63. Being German and a BMW, the new V8 features the latest technology such as direct-injection and air-to-water intercoolers, which increase efficiency. The turbines are mounted in the valley of the engine to make it more compact. BMW’s second generation of variable valve timing, Valvetronic, is also still in the mix. The result is a seamless 400-hp with a maximum torque of 450 throughout the rev band with no observable turbo lag.

Channeled through ZF’s new 8-speed automatic with BMW’s xDrive all-wheel system, the 2011 BMW 550i xDrive can jet from a standstill to 60 in 4.9 seconds and onto a limited top speed of 155 mph. The rate at which the speed climbs is astonishing – but it doesn’t really feel that quick on the inside since BMW focused on making the 2011 5-Series more refined than previous generations of the model. The engine is barely audible by BMW standards and you don’t get that sensation of getting sucked into your seat like the old 550i. Here’s another kicker: despite being equipped with the non-M Sport Package, our tester wasn’t equipped with paddle shifters, so the only way to choose your cog was via the transmission stalk. Odd.

[quote float=”left”]The rate at which the speed climbs is astonishing – but it doesn’t really feel that quick on the inside since BMW focused on making the 2011 5-Series more refined…[/quote] So what about the handling? You’d probably think that despite the muffled engine, BMW wouldn’t mess with the way their cars handle and that if one were to fancy a dash through the mountains instead of taking the clogged freeway home, the 550i xDrive would make you feel heroic with very little effort…*record scratch* but you’d be wrong – well, just a little.

As cars grew more cumbersome, the boffins at BMW did a fantastic job keeping their cars nimble enough to handle like something a fraction of the size. However, this time around, its seems like they turned their focus more towards luxury than sport to a point where…dare I say, the BMW 550xi has lost some of its hard edge. But that’s not at all to say the 550xi is a wooly handler like something from Lexus. The feeling is similar to your misses gaining a couple pounds from the stresses of life and age. She may have lost the craziness that attracted you to her in the first place, but you still love her to death. Our tester was equipped with the $2,700 Dyanmic Handling Package, allowing for a more diversified driving experience. Cycling through the three modes of Normal, Sport and Sport+ however yielded very little in discernible difference. That said, I just kept the setting in Sport+ throughout most of our test. Compared to the previous 5-Series, the ride was wonderfully smooth and not nearly as harsh as the 550i of the past was. The 2011 BMW 5-Series maintains its legendary stiff-chassis German composure in the corners and at speed. But despite the handling package and BMW’s reputation, plain old physics take their toll from the added weight and size. Body lean was a bit excessive for something from the Roundel. And to perplex us even more, there was quite a bit of oscillation in the shock absorbers even in the Sport+ setting. So much in fact that it almost made us think our 550i xDrive was wafting a bit. Sure, the BMW maintains its position as being one of the best drivers in its segment. However, the 550 xDrive just never met my expectations like old BMWs have. 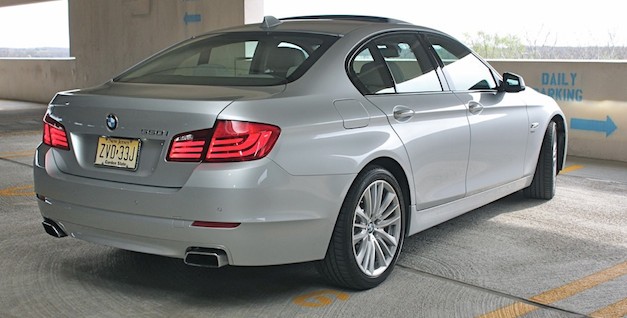 Now, BMW said that their new goal was to make their cars cater more to the American market in order to boost sales. That can be very well noticed when driving the new 2011 BMW 5-Series. With that in mind, the new 5-Series moves closer to being more of a 7-Series rather than a 3-Series. As history tells us, the 5-Series was always more like a 3-Series but bigger. So because it has made its way to be more 7-Series than 3-Series, it doesn’t exactly tingle my insides.

No, the new 5-Series isn’t terrible. In fact, it’s far from it. The 550 xDrive is pretty well-built and drives great and because it dons the badge of Bavaria’s Motor Works, it will sell by the millions. But as a BMW enthusiast myself, it just didn’t excite me like the E60. Sure, the old one made your brain fart whenever you saw one, but when equipped with the proper wheels and bodywork, the E60 ended up being an attractive car fully representative of the badassery that the boffins at the Roundel are capable of. And it also offered a unique driving experience: it was a serious and comfortable executive luxury sedan and if you and your colleagues fancied some tire shredding hoonery, the E60 would reward with enough responsive handling to make Porsches piss their pants.

But the lacking isn’t in the numbers as the 550 xDrive will still make Porsches piss their pants…just not as much. And of course, BMW will still continue to be a buy word for performance in the luxury segment. But because Audi have accomplished a seriously balanced and confident ride with the aging A6 that had the new F10 5-Series in last place in several comparisons (despite the Audi’s age), I will have to say that those looking for a performance luxury mid-sizer shouldn’t limit their options to the 5-Series as the Audi A6 and Infiniti M are equally, if not slightly more exciting to drive. Those looking for more luxury can opt for the Mercedes-Benz E-Class. And let’s not forget, we also have the gorgeous Jaguar XF. 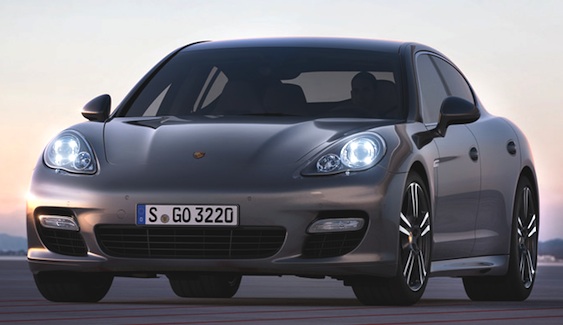