Subaru debuted its all-new next-generation Impreza today at the 2011 New York Auto Show. Featuring more dramatic styling than the outgoing model, the new Impreza is still a little hard to swallow in terms of aesthetics. But the looks aren’t the only things that changed.

Subaru said that the new Impreza provide a 30% increase in fuel economy in addition to more agile handling and more refinement. Power comes from a redesigned 148hp 2.0L flat-four that’s mated to either a five-speed manual or a Lineartronic CVT and of course, standard Symmetrical All-Wheel Drive. EPA guesstimates are 27/36 city/highway, making it the most fuel-efficient AWD car in America.

Trims are offered as followed: base, Premium, Sport Premium, Limited, and Sport Limited. No word on an STi yet, but one is probably secretly in the works.

The 2012 Impreza will arrive in dealerships this fall with prices being released closer to the launch date.

Hit the jump for the live high-res gallery and the press release.

— Roomiest Impreza Ever With New Level of Comfort and Refinement

— Same exterior dimensions, but lighter and quicker than previous model

NEW YORK, April 20, 2011 /PRNewswire/ — Subaru of America, Inc., today introduced the all-new fourth-generation 2012 Impreza® four-door and five-door compact models at the 2011 New York International Auto Show. Debuting bolder, more dynamic designs and an all-new powertrain, the 2012 Impreza models offer a 30-percent improvement in fuel economy over the outgoing versions, along with increased room, greater agility and a higher level of refinement. New amenities, infotainment technology and higher-grade interior materials contribute to a more rewarding driving and ownership experience in the 2012 Impreza, which will arrive in Subaru dealerships this fall.

Powered by an all-new 148-hp 2.0-liter Boxer engine, the 2012 Impreza comes with a choice of a five-speed manual transmission or the second-generation Lineartronic® CVT (continuously variable transmission). The 2012 Impreza will offer the highest fuel economy of any all-wheel drive car in America, with projected EPA ratings of 27 mpg city and 36 mpg highway. Every 2012 Impreza is equipped as standard with Symmetrical All-Wheel Drive.

Offered in base, Premium, Sport Premium, Limited and Sport Limited models, the 2012 Impreza conveys a bolder, more confident design that emphasizes its sporty roots and standard Symmetrical All-Wheel Drive performance. In profile, the 2012 Impreza draws focus to its wheels with powerful arches, a theme that debuted on the 2010 Subaru Legacy®.

The combination of a longer wheelbase and redesigned door and roof trim and front seats yields gains in passenger and cargo room for the 2011 Impreza. The wheelbase grows to 104.1 inches compared to 103.2 in the outgoing model. Vehicle length and width remain the same as before for both sedan and five-door models, yet, thanks to redesigned door panels, the 2012 Impreza offers increased hip and shoulder room. Rear seat passengers gain nearly two inches of legroom. Sedan trunk room and five-door cargo room are both increased, and the five-door now provides a completely flat load floor with the standard 60/40 split rear seatbacks folded.

The windshield is more raked than in the previous Impreza, with the bottom of the A-pillar moved 7.9 inches forward, allowing for a front door opening nearly five inches longer for easier entry/exit. Higher hip points and a lower, flatter instrument panel, along with larger side mirrors, contribute to better visibility from within the cabin.

Richer looking appointments and details abound, including soft-touch materials for the dashboard, door trim and center console armrest. Larger door pockets can hold plastic drink bottles and large maps. Numerous compartments located in and around the center console hold all manner of today’s personal items, such as phones, USB drives and MP3 players.

The new 2.0-liter Boxer engine feels even more responsive than the 2.5-liter engine it replaces, thanks to lighter vehicle weight – and especially when equipped with the new CVT, a quieter and more compact version of the CVT that debuted in the 2010 Legacy and Outback® models. Unlike a conventional automatic transmission, which uses fixed gear ratios, a CVT provides infinite variability between the highest and lowest available ratios with no discernable steps or shifts. The CVT continuously and smoothly adapts to performance demand, helping to keep the engine in its most efficient operating range. Impreza Premium, Sport and Limited models with the CVT also feature a 6-speed manual mode with steering wheel paddle shifters, which allow the driver to control the transmission via six pre-set ratios.

Other technologies helping boost fuel efficiency in the 2011 Subaru Impreza include the new electric power steering system, which by itself contributes a 2-percent efficiency increase, and lower rolling resistance tires.

Building on Subaru’s renown for safety (all 2011 Subaru model lines are IIHS “Top Safety Picks”), the 2012 Impreza was designed to excel under the new, more stringent NHTSA testing regimen. The new body structure makes greater use of high-tensile strength steel and features special stiffening elements at key locations. All 2012 Impreza models add a new driver’s knee airbag to the roster of safety features. The passenger-seat front airbag, features a shell-type design with a center groove, thus exposing the passenger to less impact force upon deployment.

All Impreza models for 2012 are equipped as standard with Vehicle Dynamics Control (VDC), which combines stability and traction control functions. Likewise, all 2012 Impreza models are equipped with a standard 4-wheel disc Anti-lock Brake System (ABS) with Electronic Brake-force Distribution (EBD) and the Brake Assist safety system.

Topping the 2012 Impreza range, the Limited and Sport Limited (five-door only) models deliver the highest level of comfort and convenience ever offered in an Impreza. Leather seating, the All-Weather Package and Alloy Wheel Package are standard. A further audio upgrade (above the Premium) features a 4.3-inch display screen and standard HD Radio. The navigation system and power moonroof are options. 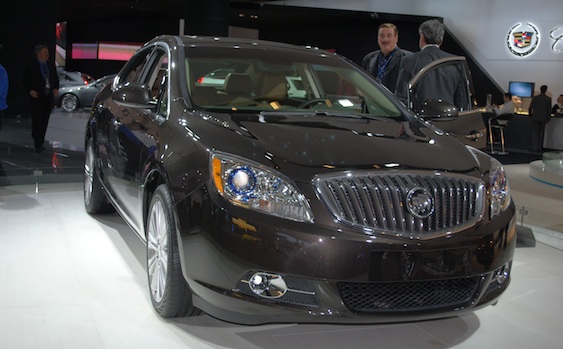 Audi to increase sales of larges sedans to boost image in the U.S.

February 8, 2010 Omar Rana Comments Off on Audi to increase sales of larges sedans to boost image in the U.S.