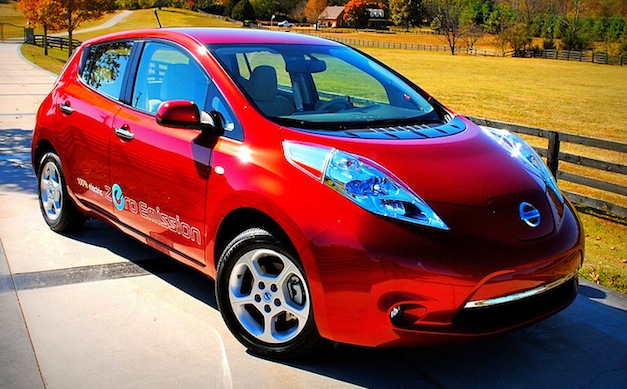 Nissan says that the designers and engineers of the 2011 Leaf sought out to create a car for the real-world; a car that would place Nissan as a leader in ushering in the era of zero-emissions and full-electric mobility.

This begs obvious questions about the Leaf: Is it good enough to position Nissan as a leader in full-electric mobility? Is it comfortable? Is it convenient? Most of all it makes us wonder whether consumers will be able to adapt to the technology. 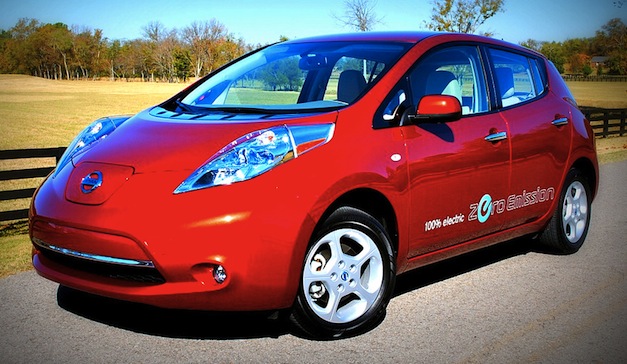 Hybrids, EVs, and fuel-cells have all traditionally carried a distinctive style of body design that has been nothing short of awkward, and the Leaf is no exception. There is function however, behind that form, and Nissan calls it ‘Smart Fluidity’. That is, the merging of aerodynamic acoustics and freedom of motion provided by the design.

[quote float=”left”]Though it may not have the most attractive exterior, it definitely makes the statement: ‘I’m helping in saving polar bears and mother nature.'[/quote] The swooping silhouette starts at the low, compact hood, and moves through a distinctive shoulder line to mesh seamlessly with the large, rear-spoiler. The front-end bears a unique V-shaped design, effectuated by long, up-slanting LED headlamps. The shape and angle of the headlamps helps reduce drag by redirecting airflow away from the side-mirrors, ultimately reducing wind and drag. The LEDs used in the headlights also consume electricity at half the rate of conventional halogens.

The rear-end design is also a matter of form following function. The slim aerodynamic LED taillight design and corners, combine with sleek and efficient muffler-less rear bumper with diffuser, to further manage the aerodynamics of the car, without compromising interior space. The rear-end is also sans charging port, as the Leaf features charging port access under the hood.

Though it may not have the most attractive exterior, it definitely makes the statement: “I’m helping in saving polar bears and mother nature.” 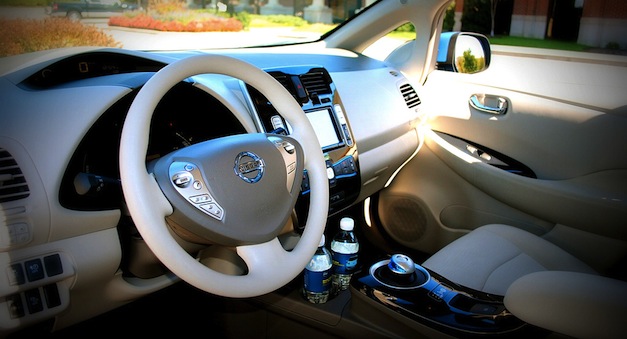 Step inside the 2011 Nissan Leaf and you’ll find that the interior is comfortable, quiet, sturdy, and spacious enough for 5-passengers. However, after starting the Leaf you’ll notice what Nissan calls the ‘EV Touch’ interface.

When you get in and power on the Leaf, you’re welcomed by a sound reminiscent of a classic video game console system. Your eyes are immediately drawn to the dash before the driver where you’ll be looking at twin, combination meter display along with a 7-inch information display in the center dash.

For easy access, Nissan Leaf owners will spend most of their time staring at the instrument panel that provides information on the Eco indicator and speedometer, the power meter, battery temperature gauge, multi-function display, remaining energy gauge, capacity level gauge and distance to empty display.

The display in the center takes the ‘EV Touch’ feeling to the next level while providing the driver with access to the CARWINGS telematics system, which allows Leaf drivers to use a mobile phone app to access climate control functions, set charging options remotely, and view in real-time a listing of nearby charging stations.

If all this tech-talk is scaring you – don’t sweat it. You’ll definitely have to sit in a Leaf and give the EV-Touch a try before you realize that the instrument panel and the center console displays are ‘dumbed-down’ for the average consumer so they don’t feel like they are flying a space ship. 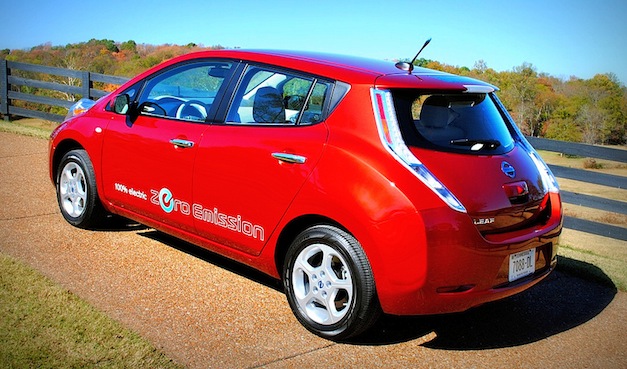 With regard to operation, there exists little difference between the feeling of driving the all-electric Leaf and conventional gasoline powered vehicles. If you disregard the fact that you’re driving an electric-car, the only difference you’ll really feel is that the Leaf is extremely quiet, and will only carry you approximately 100 miles on a ‘full tank’.

[quote float=”right”]As far as performance goes, if you are a rather un-spirited driver who has a daily commute of less than 100 miles (back and forth), then we fully recommend giving the Leaf a shot[/quote] The 24 kWh Li-ion battery breathes life into the 80kW AC synchronous motor, which brings the power of 107 horses, and 207 lb-ft of torque. While that seems like a minuscule amount of torque, bear in mind that it gets pushed out instantaneously; almost mimicking the zip put out by a gasoline engine until you reach about 35 mph. All of that makes for a car that it is quick in the hustle of stop and go traffic, but the car still takes a good 10 or 11 seconds to reach 60 mph, and another 8.7 to reach 80 mph. Oh, and before you go and try to break some speed records, just know that the Leaf’s top speed is electronically governed at 92 mph, although we managed to see 95 on the speedometer.

As far as fuel-economy goes, in a new MPG equivalency rating developed by the EPA, the Nissal Leaf averages 106 mpg / 92 mpg (city/highway), with annual electric cost estimated to be just $561.

One major point of concern with this technology is charging time. With the quick charge port (a $700 option, which you can get installed at home), the Leaf can be plugged into a public charging station and attain an 80% charge in just 30 minutes. Charging at home through a 200V outlet is estimated to take approximately eight hours – which is more than enough for an overnight charge before you head off to work the next day.

As far as performance goes, if you are a rather un-spirited driver who has a daily commute of less than 100 miles (back and forth), then we fully recommend giving the Leaf a shot. We can not say the same however, for the more spirited and long-distance driver. 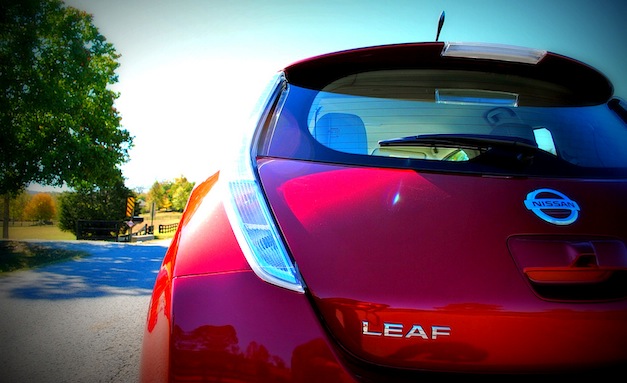 The Nissan Leaf has been available to consumers since December, in California, Washington, Oregon, Arizona and Tennessee. Nissan said it has sold a total of 298 units, for a total of 452 units in the United States since its December launch – so there are people buying it.

Of course, many of you that are considering an electric vehicle as your new car have thought of this predicament. Let me just say that if that is a legitimate concern of yours, you’re better served looking at another vehicle, especially if there’s no charging station infrastructure in your area.

“Imagine the possibility of never needing to go to a gas station again. Or of paying less than $3 for 100 miles behind the wheel. Or of creating zero emissions while driving,” said Brian Carolin, senior vice president, Sales and Marketing, NNA. “Nissan leads the industry by offering the first affordable, zero-emission vehicle for the mass market. Nissan Leaf truly is in a class by itself.”

And while I’m not to fond of everything eco-friendly coming out of the automotive industry these days, the Nissan Leaf made me realize that it is in a class by itself. However, it does everything that than another car in its size and class will do.