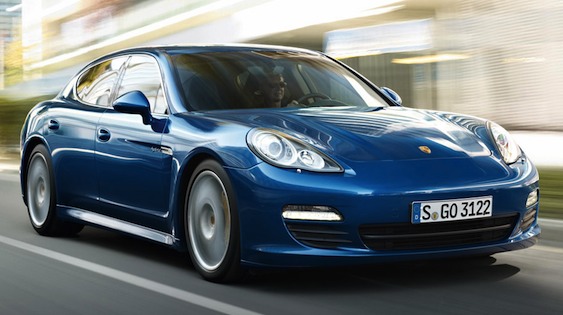 Debuting at the 2011 Geneva Motor Show will be the 2012 Porsche Panamera S Hybrid, the most fuel-efficient Porsche of all time.

The Porsche Panamera S Hybrid sedan joins the Cayenne S Hybrid SUV as the company’s second hybrid road-going model and will be powered by the same gasoline engine/electric-motor setup in the Cayenne S Hybrid. A 3.0L supercharged V6 engine making 333-hp is coupled with a 47-hp electric-motor. The motor gets its power from a nickel metal hydride battery that stores energy from braking and other driving situations.

The 2012 Porsche Panamera S Hybrid will go on sale in the United States in late 2011 with prices starting at $95,000 (excluding destination charges).

The Panamera S Hybrid is the most fuel efficient Porsche of all time. Optional low-rolling-resistance tires developed especially for the Panamera help this hybrid performance sedan deliver its impressive NEDC fuel economy figure. But even with standard performance tires, the Panamera S Hybrid’s fuel consumption is a low 7.1 L/100 km. Official EPA fuel economy estimates will be available closer to the car’s on-sale date.

The Panamera S Hybrid sets new standards in terms of Porsche performance as well as hybrid efficiencies. It accelerates from 0 to 60 mph in just 5.7 seconds and has a top track speed of 167 mph (270 km/h). Its range in purely electric mode is approximately one mile, with electric-only acceleration possible up to just over 50 mph (85 km/h).

The Porsche parallel full hybrid system also reduces consumption at high speeds thanks to its ‘sailing’ or coasting mode. When the driver lifts off the accelerator at normal highway cruising speeds, the gasoline engine is completely switched off and disengaged from the drivetrain by a decoupling clutch. This eliminates the combustion engine’s drag forces and braking effect in the interest of lower resistance, fuel consumption and emissions. As soon as the driver presses the accelerator, to pass another vehicle for example, the gasoline engine smoothly starts within fractions of a second and engine rpms are increased to match the current vehicle speed. It does this seamlessly thanks to the Hybrid Manager, which also helps the Panamera S Hybrid accelerate dynamically in gears at higher speeds much like a conventional Panamera.

The same gasoline engine/electric motor combination that has already proven itself in the Cayenne S Hybrid drives the Panamera S Hybrid. A 3.0-liter supercharged V6 engine delivering 333 horsepower is supported by a 47-horsepower (34 kW) electric motor. Depending on driving conditions, either drive unit can operate independently or together to drive the rear wheels. The electric motor, which also serves as the car’s generator and starter, combines with the decoupling clutch to form the compact hybrid module located between the combustion engine and the transmission. The electric motor is connected to a nickel metal hydride (NiMh) battery that stores electric energy recovered from braking and other driving situations. The transmission is the same eight-speed Tiptronic S fitted in the Cayenne models, with a wide range of gear ratios.

The Panamera S Hybrid has an even higher level of standard equipment than the V8 Panamera S. Adaptive Air Suspension with the Porsche Active Suspension Management (PASM) adaptive shock absorber system, Servotronic® variable-assist power steering and a rear wiper have been added to the list of standard equipment. Other standard features include Porsche Communication Management (PCM) with navigation, the universal audio interface to connect an external audio source such as an iPod or a USB stick to the PCM system, and Bi-Xenon™ headlights. Inside, this new model also features an innovative display that provides the driver with relevant information about the status of the vehicle’s hybrid drive systems.

With the launch of the new hybrid variant, the Panamera model line now consists of six different models. The new offering underlines the strategic importance of the Porsche Intelligent Performance philosophy, with a combination of sportiness and economy unique in its segment. As such, it builds on the Panamera sedan’s considerable success, with not quite 30,000 vehicles delivered worldwide since it went on sale in late 2009.

The Panamera S Hybrid will go on sale in the United States later in 2011 at a base suggested retail price of $95,000 (excluding destination).