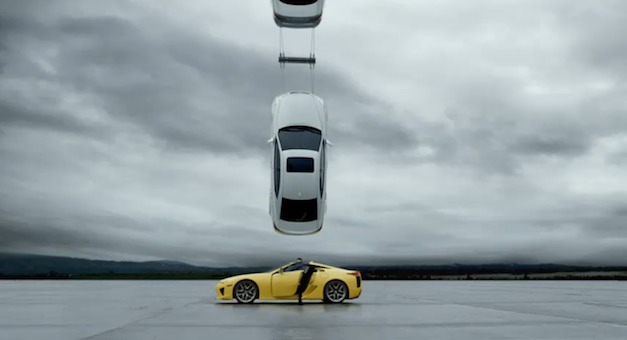 “There’s the easy way, and there’s the Lexus way,” says Lexus – however, Lexus’ way is really the hard way… the very hard way. Toyota’s luxury brand has just launched a new advertising campaign that show how much painstaking work Lexus puts into developing each and every unit.

“It isn’t enough to just say that we pursue perfection, we want to demonstrate the great lengths we go to in our pursuit,” states Dave Nordstrom, vice president of marketing for Lexus. “The new broadcast spot allows us to focus on the foundation of our vehicles, the chassis, and show its almost unbelievable strength. In fact, we feared that it would be so unbelievable, we invited a physicist and structural engineer to witness the shoot, to prove that it did, in fact, occur without the use of special effects or computer generated-imagery.”

The campaign focuses around a new TV ad spot titled ‘Chain,’ which shows a real-life demonstration of the strength of the chassis of Lexus vehicles. The sport shows a lone crane lifting five Lexus’ – an LS, RX, GS, ES and IS. A $375,000 LFA than comes into the shot and parks directly under the chain of vehicles weighing a total 21,000 pounds.

You can check out the whole Hard Way campaign after the jump.

Sometimes, You Have to Do Things The Hard Way

TORRANCE, Calif. (Jan. 18, 2011)—There’s the easy way, and there’s the Lexus way. A lone crane slowly lifts the front end of a Lexus LS, then a second vehicle is attached using cables and stretch bars, then another and another and finally, a fifth Lexus vehicle is suspended in midair from the crane, using no support other than the strength of the LS. The gravity-defying vehicles aren’t a figment of your imagination or a camera trick. They are part of a new advertising campaign from the automaker, which debuted on Jan. 16.

Instead of using special effects to tell the story, the new broadcast TV spot, titled “Chain,” is a real-life demonstration of the strength of the chassis on Lexus vehicles, with the LS taking the lead. Shot on the runway of an airport, a lone crane is used to lift vehicle after vehicle until five Lexus vehicles—an LS, RX, GS, ES and IS—are suspended in midair nose to end. Finally, an LFA comes into the shot and parks directly below the chain of vehicles, and a voiceover states, “The hard way is how Lexus inspires absolute confidence. The hard way is the pursuit of perfection.” That is the kind of confidence that enables the automaker to park the $375,000 LFA below a chain of vehicles weighing a total 21,000 pounds.

Lexus brought in a physicist and a structural engineer to participate in the shoot and witness that the vehicles were attached to each other without any supporting hardware.

For the final portion of the amazing, or seemingly impossible feat, stretch bars, cables and hooks were utilized to attach the vehicles one at a time to the crane and then to each other. Not only did the experiment work one time, the crew suspended the same vehicles over and over for a period of three days without needing to replace them.

In addition to the broadcast TV spot, Lexus has developed an integrated marketing campaign to continue sharing its engineering story. The campaign debuts online with a series of 14 unique videos demonstrating how and why Lexus engineers take the hard way—whether the automaker is taking a blowtorch to the leather interior to see how much heat it can withstand or testing the vehicles in hurricane-force winds and rain. Behind-the-scenes footage for “Chain” was also produced to show consumers how the vehicles were suspended in midair. All stories can be viewed at www.lexus.com/thehardway.

The multifaceted brand campaign includes a robust online, print, mobile and outdoor execution and can also be viewed at YouTube.com/lexusvehicles. The TV spot will air on network, cable prime and cable sports. It will also air during the NFL playoffs, college basketball and on full-episode players.