Automakers are getting ready to unveil an onslaught of Super Bowl advertising for the big game next month. Audi has already released its new 60-second TV ad spot called the Goodnight Moon. The commercial has already aired on cable networks and will make its national debut starting today and tomorrow during the CBS and FOX AFC and NFC divisional games.

The 60-second spot takes says goodnight to the age of old luxury (specifically the Mercedes-Benz S-Class) and features the new 2011 Audi A8 flagship sedan, the most technologically-advanced vehicle the company has ever produced

The 2011 A8 will also be featured in Audi‘s upcoming Super Bowl TV spot, set to air in the first break after kick off.

– In Audi‘s ongoing campaign to redefine luxury, the 60-second spot claims “Luxury Has Progressed”
– Spot follows the storyline of the acclaimed children’s book Goodnight Moon
– The all-new 2011 A8 sedan will be the featured vehicle in both the companion and Super Bowl advertisements

Audi today announced a new 60-second TV advertisement billed as a prelude to its upcoming Super Bowl ad. An evolution of Audi’s ongoing campaign to redefine luxury, the companion spot taps into viewers’ notions of old luxury with the help of an unlikely literary inspiration: Goodnight Moon, the 1947 children’s book by Margaret Wise Brown, one of the best-selling children’s books of all time.

The TV commercial titled “Goodnight” is inspired by the cadence and rhyme scheme of the original Goodnight Moon while taking the viewer on a journey through a traditional-style mansion laden with trite symbols of old, stuffy luxury. The 60-second spot methodically says goodnight to the age of old luxury, defined by gluttony and excess, and features the all-new 2011 Audi A8 flagship sedan, the most technologically-advanced vehicle the company has ever produced and the apex of Audi’s new luxury lineup.

The highly-acclaimed 2011 A8 will also be featured in Audi‘s upcoming Super Bowl TV spot, set to air in the first break after kick off on Super Bowl Sunday, Feb. 6, 2011.

“Research shows that consumer impressions are based in nostalgia and formed at a very young age. In ‘Goodnight’ Audi taps into these memories to break through the nostalgia and re-establish what it means to achieve luxury,” said Scott Keogh, chief marketing officer, Audi of America. “Today’s luxury consumer exists in a world where status is no longer solely defined by tradition, but increasingly by their entrepreneurial accomplishments. As a result, they are seeking out new and more evolved luxury symbols that make them stand out from the crowd.”

“Goodnight” begins airing Thursday, Jan 13, across cable networks, followed by a national network debut on Saturday, Jan. 15 and Sunday, Jan. 16, on CBS and FOX during the AFC and NFC divisional games. The spot also will air during the Sunday morning network news programs on ABC, CBS, FOX, and NBC.

Super Bowl XLV will mark the fourth consecutive appearance for Audi, the only auto maker in its class with Super Bowl presence for four years running. Known for its aggressive and fun approach, Audi will once again deliver a fearless and intriguing Super Bowl spot that dares the viewer to re-think luxury. The 60-second TV advertisement is being created by San Francisco-based Venables Bell & Partners.

“We chose to feature the award-winning 2011 A8 because it represents today’s standard of progressive luxury – sophisticated, yet memorable design, the most advanced technology available, and unmatched performance,” said Keogh.

The all new 2011 A8 sedan has been hailed as a technological masterpiece with striking aesthetics. Setting new standards of luxury, dynamism and efficiency, the A8 features a light-weight Aluminum Space Frame® body allowing it to achieve equal or greater fuel efficiency than leading luxury hybrid vehicles. Audi’s flagship A8 sedan also features a 19-speaker Bang & Olufsen® sound system, MMI® touch, Audi pre-sense safety features and the Audi signature LED lighting.

The past three years Audi has delivered highly-rated spots, including last year’s “Green Car” ad featuring the Audi A3 TDI, Green Car Journal’s 2010 “Green Car of the Year,” and a soundtrack created by rock legends Cheap Trick. The 2009 spot featured actor Jason Statham in a series of high-speed chase scenes involving luxury competitors, sending the dual message that luxury is evolving. The 2008 Audi spot delivered a parody of the movie “The Godfather” and signaled that the brand was ready to challenge the perceived luxury leaders by “putting luxury on notice.” 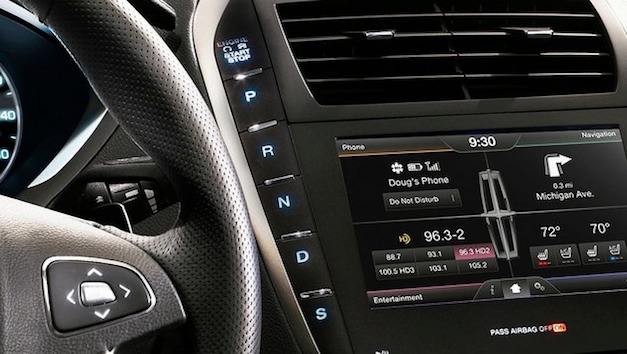 Lincoln reimagines the gear shifter with the new 2013 MKZ

May 4, 2012 Omar Rana Comments Off on Lincoln reimagines the gear shifter with the new 2013 MKZ