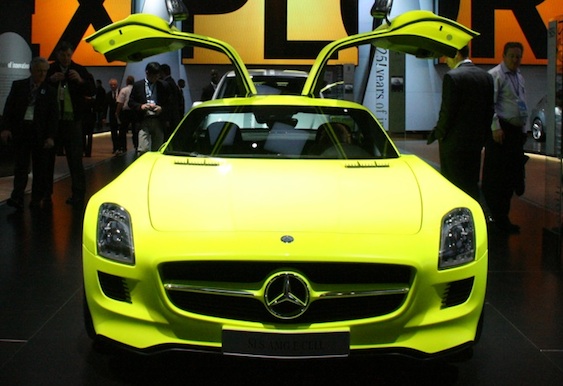 Here at the 2011 Detroit Auto Show, green vehicles took center stage at Mercedes-Benz’s display. Of course, the most outstanding one was the Mercedes-Benz SLS AMG E-CELL, which has been confirmed for production and will be the first ever all battery-powered vehicle from AMG. The electric supercar is being produced as part of Mercedes-Benz’s “AMG Performance 2015” strategy, which aims to continually reduce fuel consumption and emissions.

Power for the Mercedes-Benz SLS AMG E-CELL comes from 4 synchronous electric motors, each positioned near to the wheels. All motors have combined output of 526-hp with a maximum torque of 649 lb-ft. With one transmission per axle transmitting power, the green supercar goes from 0-62 mph 4 seconds with a top speed of 155 mph.

How many miles does the SLS AMG E-CELL get on a full charge? Mercedes-Benz says less than 90 miles depending on how you drive.

Note to automakers: Please do not unveil your cars in shocking neon green.

Kristiansund (Norway) – Mercedes-AMG is rising to the challenges of the automotive future: the SLS AMG E-CELL showcases state-of-the-art development of an exciting super sports car with a zero-emission high-tech drivetrain. Boasting a power output of 526 hp and 649 lb-ft of torque, this prototype vehicle from AMG offers exceptional performance. The gullwing with electric drive is part of the company strategy entitled “AMG Performance 2015” which aims to continually reduce fuel consumption and emissions.

With the SLS AMG E-CELL, Mercedes-AMG is providing a glimpse of its latest development project – a powerful and locally emission-free super sports car. Finished in fluorescent “AMG lumilectric magno” paint, the gullwing offers a glimpse at a possiblesmall series production vehicle and at the same time reflects the innovative strength and development expertise of the AMG performance brand.

“We take social responsibility very seriously and with the SLS AMG E-CELL we are demonstrating a further milestone in our “AMG Performance 2015″ strategy. It is our goal to continually reduce the fuel consumption and emissions of new models in the coming years, while at the same time enhancing the core brand value of performance”, explains Ola Källenius, chairman of the board (from 1 July 2010) of Mercedes-AMG GmbH. With the SLS AMG E-CELL, the performance brand of Mercedes-Benz is launching a totally innovative drivetrain for super sports cars, reaching new territory in this market segment.

The ground-breaking drive system boasts some impressive highlights: powerful traction is provided by four synchronous electric motors with a combined peak output of 526 hp and a maximum torque of 649 lb-ft. The four compact electric motors each achieve a maximum rpm of 12,000 rpm and are positioned near the wheels. As a result, compared with wheel-hub motors the unsprung masses are substantially reduced. One transmission per axle transmits the power.

Acceleration from zero to 60 mph in 4 seconds

When it comes to dynamics, the electrically-powered SLS AMG makes a statement: the gull-wing model accelerates from zero to 60 mph in 4 seconds – which almost puts it on the same high level as the SLS AMG with 6.3-liter V8 engine developing 563 hp (0-60 mph in 3.7 seconds).

Further driving excitement is provided by the agile accelerator response and straight-line performance: unlike the combustion engine, torque build-up with an electric motor is instantaneous – maximum torque is available virtually from a standstill. The spontaneous torque build-up and effortless power delivery – which does not diminish by any interruption of tractive power – are combined with engine running characteristics which are totally free of vibration. Four motors, four wheels: the intelligent and permanent all-wheel drive of the electric SLS guarantees driving dynamics at the highest level, while at the same time providing the best possible active safety. All four driven wheels achieve optimal traction, independent of weather conditions.

This very special gullwing is therefore able to “electrify” the driver with a completely unique, effortlessly superior and emotional super sports car driving experience, even at this early, prototype stage of development. In brief: the SLS AMG E-CELL is true to the AMG brand.

The SLS AMG E-CELL drive incorporates a liquid-cooled high-voltage lithium-ion battery featuring a modular design with an energy content of 48 kWh and a capacity of 40 Ah. The maximum electric load potential of the battery, which consists of 324 lithium-ion polymer cells, is 480 kW, which is an absolute best figure in the automotive sector. Another technical feature of this considerable performance is the intelligent parallel circuit of the individual battery modules – this also helps to maximize the safety, reliability and service life of the battery. The 400-volt battery is charged by means of targeted recuperation during braking while the car is being driven.

A high-performance electronic control system converts the direct current from the high-voltage battery into three-phase alternating current which is required for the synchronous motors and regulates the energy flow for all operating conditions. Two low-temperature cooling circuits ensure that the four electric motors and the power electronics are maintained at an even operating temperature. A separate low-temperature circuit is responsible for cooling the high-voltage lithium-ion battery. In low external temperatures, the battery is quickly brought up to operating temperature with the aid of an electric heating element. This helps to preserve the overall service life of the battery. In extremely high external temperatures, the cooling circuit for the battery can be additionally boosted with the aid of the air conditioning system.

The purely electric drive system was taken into consideration early in the development of the SLS AMG. Thus, the SLS easily integrates the high-performance, zero-emission technology into its structure: for example, the four electric motors and the two transmissions can be positioned as close to the four wheels as possible and very low down in the vehicle. The same applies to the modular high-current battery, whose modules are located in front of the firewall, in the center tunnel and behind the seats. Advantages of this solution include the vehicle’s low center of gravity and balanced weight distribution – ideal conditions for optimum handling, which the electrically-powered SLS AMG shares with its gasoline-powered sister model.

The installation of the drive components required no changes whatsoever to the car’s weight-optimized aluminum spaceframe, and there were just as few constraints when it came to maintaining the excellent level of passive safety and high degree of long-distance comfort that are hallmarks of Mercedes-Benz cars.

Thanks to this sophisticated front-axle design, which has already been tried and tested in the racing world, the agility and driving dynamics of the electrically-powered SLS AMG attain the same high levels as the V8 variant. Another distinguishing feature is the speed-sensitive power steering with rack-and-pinion steering gear: the power assistance is implemented electrohydraulically rather than just hydraulically.

The prototype vehicle is slowed with the aid of AMG ceramic composite brakes, available as an optional extra for the series production model, which boast extremely short stopping distances, a precise actuation point and outstanding fade resistance, even in extreme operating conditions. The over-sized discs – measuring 15.8 x 1.5 in. at the front and 14.2 x 1.3 in. at the rear – are made of carbon fiber-strengthened ceramic, feature an integral design all around and are connected to an aluminum bowl in a radically floating arrangement.

The ceramic brake discs are 40 percent lighter in weight than the conventional, grey cast iron brake discs. The reduction in unsprung masses not only improves handling dynamics and agility, but also ride comfort and tire grip. The lower rotating masses at the front axle also ensure a more direct steering response – which is particularly noticeable when taking highway bends at high speed. The ABS and ESP® systems have been adapted to match the special handling of the permanent all-wheel drive.

The clean, exciting design of the prototype vehicle boasts a number of minor yet extremely effective modifications. At the front, the dynamically shaped full-LED headlamps with integrated daytime driving lights immediately catch the eye: they help to optimize the vehicle’s energy efficiency, since they require less power compared with regular bi-xenon headlights. The wider radiator grille also has a new look, and now comes with transverse slats instead of a diamond-pattern. The air outlet openings on the hood and the vehicle sides have also been modified for enhanced aerodynamics. All trim and detachable parts, which are finished in chrome or silver shadow on the standard SLS AMG, are now finished in matte black.

The front apron has not only been brought further forward, but also helps optimize airflow to the underbody. This improves wind resistance while reducing downforce. An extendable front splitter enhances this effect: in parallel with the automatic rear spoiler, it extends downwards by three inches at speeds above 75 mph and helps to further accelerate the air which travels beneath the car. When it reaches the area of the rear axle, the air enters the rear diffuser which, due to the lack of an exhaust system, features a steeper angle, thus increasing downforce at the rear axle and in turn further enhancing the aerodynamic balance. The vehicle’s AMG 10-spoke light-alloy wheels feature a new, smooth-surfaced design and are fitted with 265/35 R 19 (front) and 295/30 R 20 (rear) tires.

The transformation from gasoline to electric super sports car also called for some specific changes to the interior. As a result, the AMG instrument cluster and center console in particular both feature a new design. The new AMG instrument cluster provides information on speed, charge status of the battery and the estimated range. The newly designed center console now houses a 10-inch touchscreen, which driver and passenger can use to conveniently operate all of the audio, climate and navigation functions, and also obtain information on the flow of power from the four electric motors.

The interior appointments are dominated by high-quality premium leather in a black/white color combination – it has been used not only on the sports seats, the performance leather/alcantara steering wheel and the door linings, but also on the broad center console which runs towards the back of the vehicle between the seats. 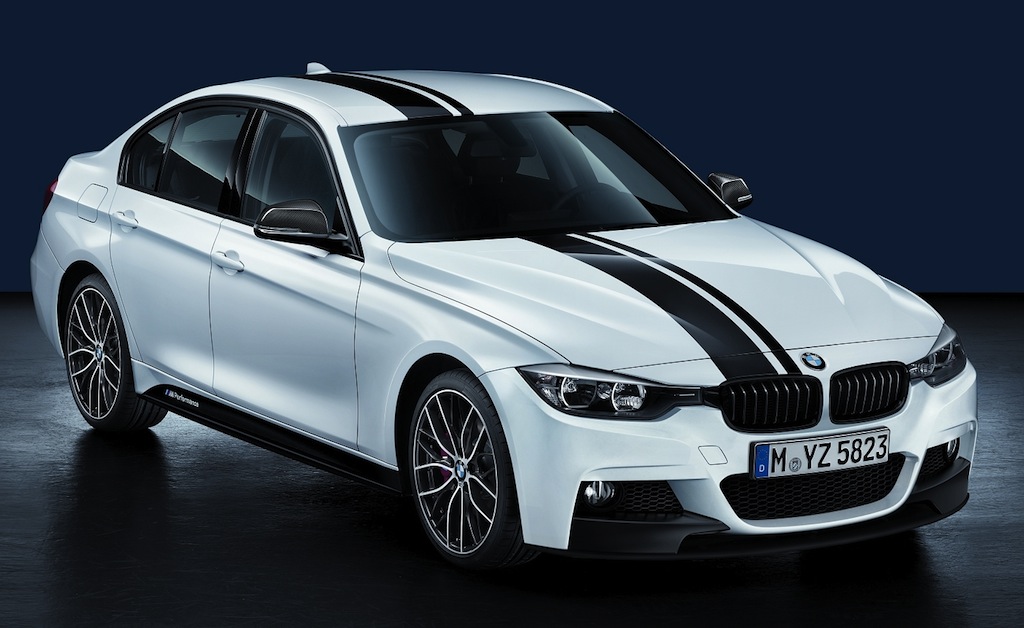 Video: Hyundai challenges Mini at Road Atlanta, wants to step in for Porsche