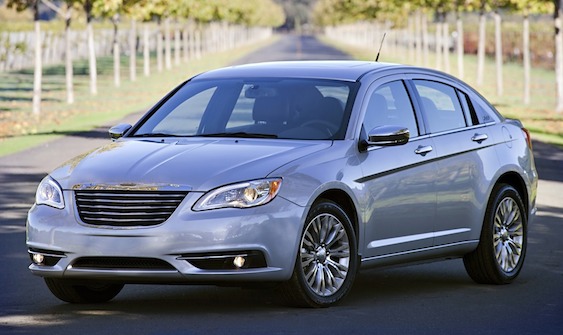 Now I know I haven’t been very kind to the Chrysler products in my previous posts but it was for good reason. But as Jeremy Clarkson would’ve said, they were absolute rubbish. One of the cars to receive such feedback was the last generation Chrysler Sebring. It seemed like nothing more than a byproduct of the engineers’ coffee break discussions. It was woeful to drive, terribly built, and hopelessly unattractive and under those pretenses, was immediately destined for fleet use. If you’ve ever rented a car before, chances were you had time behind the wheel of one and I’m awfully sorry if you ever have. Honestly, I would rather have traveled by shopping cart.

And because the Sebring was one of the definitions of Chrysler’s problems, they dropped the Sebring name for 2011. It is now called the 200 and according to Chrysler, the 200 has undergone some significant changes. But as far as I’m concerned, it really doesn’t seem like it.

I’ll start off with the looks. Sure it has a new face and a new rear, but the Sebring’s basic proportions and shoulder line still remain the same. And really how desperate is Chrysler, if they decided to brag about a new “LED center stoplight,” which I’m guessing, is referring to a third brake light. Even despite the new face and visual upgrades, it looks like the old Sebring was rebadged and given a facelift. The point where the steep shoulder line and the C-pillar meet… looked terrible on the Sebring, and it looks terrible on the 200.

Read more after the jump.

Engine wise, the 2.4L four-banger also has been tweaked according to Chrysler and can you guess how much more power it received? Well, it hasn’t changed at all. The new Pentastar V6 however will find its way into the Sebring, delivering 283-hp and 260 lb-ft of torque, which is quite a bit of power to be sending to a front-wheel drive car. Both engines are mated to six-speed autos, and Chrysler says they will still offer the four-speed automatic for the price conscious buyers, but why?

Suspension wise, Chrysler claims that the new 200 had its suspension completely redesigned. The track has been widened, and ride has been lowered for a lower center of gravity and more aggressive stance. Additionally, both the chassis and suspension tuning have been worked to reduce road and wind noise, less body roll, better steering precision and less vehicle vibrations.

So, just like the rest of Chrysler’s new lineup, everything seems pretty promising on paper. But I still think the 200 is still aesthetically challenged, no matter how much they improve the Sebri…I mean 200. Of course, this is by no means a full review and will reserve my complete judgment when I get behind the wheel and see it in person. Check back with egmCarTech for a full review when we get into one.

Report: GM to build new small-car at its Orion plant

June 26, 2009 Omar Rana Comments Off on Report: GM to build new small-car at its Orion plant