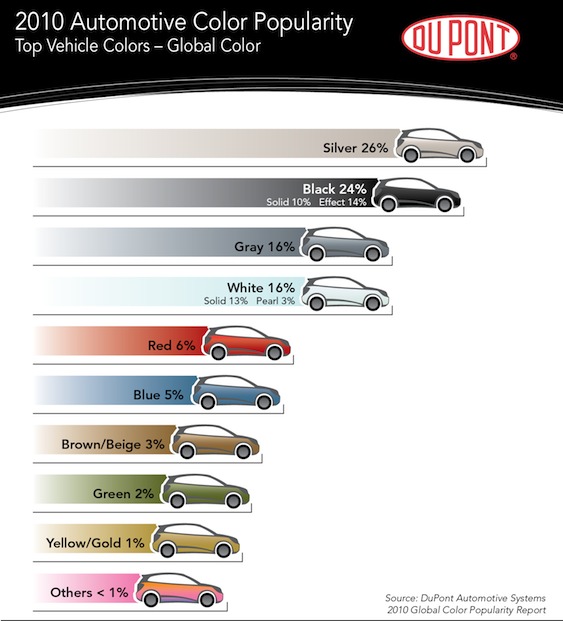 Dealers nationwide order silver and black color vehicles for a very good reason. According to paint manufacturer Dupont, silver and black are always in a tight competition for the title of the “world’s most popular car color.”

A full 26% of cars globally are painted silver, while black follows closely behind with 24%.

Rounding out the top five were white and gray with 16 percent each and red with 6 percent.

Let us know in the poll below what color you’re a fan of – Silver or Black?

Wilmington, Del., December 7, 2010 –Silver and black are in tight competition for the title of “world’s most popular car color,” according to DuPont. As the global automotive coatings leader, DuPont issued its 58th Global Automotive Color Popularity Report today, which includes automotive color popularity information and regional trends from 11 leading automotive regions of the world. Each year, the DuPont report reflects data from established and emerging growth markets in the automotive industry; and in 2010, for the first time, includes trends from South Africa. DuPont’s study is the original and most comprehensive report on global automotive color popularity and remains the first of its kind compiled on a global basis.

Only two percentage points separate silver from black as the leading vehicle color globally, and black’s popularity in key automotive markets outside of North America is substantial. White and gray are tied for third place, with gray’s popularity increasing three percentage points from last year’s survey. Red, the only non-neutral color in the top five, is increasing in popularity, taking the fifth spot on the global color popularity rankings. The top 10 global vehicle colors are as follows:

Just three years ago, silver led all regions in color popularity. With the shift toward more globalization in the automotive industry, regional preferences are influencing the global trend. With trends of silver, black and white – all neutrals – vying for the top three spots among most regions, gray has increased in popularity and is gaining in interest among consumers in many regions. Both silver and black/black effect saw a 1 percent gain in global popularity in the 2010 report, with white remaining flat over last year. Gray increased in popularity by three percentage points. While regional preferences remain for red and blue, both have fallen three percentage points this year over last. DuPont analysts continue to see a trend toward brown and beige increasing in popularity as well.

Differentiated Regional Markets In North America, white/white pearl retained its lead for the fourth year in a row, with 21 percent popularity share. DuPont experts say this largely reflects the preferences of the fleet and light truck and sport utility vehicle (SUV) markets in North America. Black/black effect beat silver by one percentage point, for the No. 2 spot, with 18 percent popularity. Gray saw a 2 percent increase over last year, and now has a stronghold, in fourth place for the region. Rounding out the top five is red with 11 percent popularity.

European trends this year show black/black effect leading overall, across nearly all vehicle categories, with 24 percent. Gray is five percentage points behind with 19 percent, and silver has fallen to 17 percent popularity in Europe.

The exception of black/black effect’s lead in Europe is within the intermediate/multi-purpose vehicle (MPV) segment, which saw gray in the lead by a slight margin. Gray is in the No. 2 spot in the region overall, and within all categories except truck/SUV, where white leads by just four percentage points.

“Even though neutrals lead the color popularity for the European region, we’re still seeing consumer willingness and preference to showcase a chromatic hue as a form of personal expression,” said Elke Dirks, DuPont color designer for Europe. “The volume of blue hues for vehicles has been constantly decreasing over the last years, but it is still the No. 1 chroma color for all vehicle segments in Europe and will have increasing potential for the future,” she said.

In Mexico, there was no change among the top three colors since 2009, but black/black effect increased four percentage points to tie with white at 22 percent in the market, while silver remained in third place at 18 percent. Gray and red finish the top five colors of choice for the region, with 11 percent popularity each. Also, brown/beige saw a significant increase in the region, representing 5 percent of the Mexican market.

In South America, silver reigns with 33 percent of the market, 10 percentage points ahead of black in the region. White and gray tie for a distant third, each with just 13 percent of the region’s popularity, while red (9 percent) completes the top five.

Specific to Brazil, silver leads the country with 34 percent popularity, garnering the largest percentage in popularity of any of the regions/countries reviewed in the report. Black is 10 percent behind at 24 percent, and white stands in the third spot with 13 percent.

In the Asia/Pacific region, light neutrals lead in popularity, while black/black effect are popular for luxury models in the region. “The concept of ‘Think Blue’ has developed industrywide, as OEMs strive for green vehicles and concept designs,” said Emily Hung, DuPont color designer for the Asia-Pacific region. “Light blue metallic colors are widely selected for environmentally responsible concept vehicles by many auto manufacturers in the region.”

China finds silver in the lead in this year’s report, with 33 percent share in popularity. Meanwhile, black is back, increasing 8 percentage points over last year to garner a close second place spot in the region with 31 percent share. Gray holds the No. 3 position with 18 percent, with white (9 percent) and red (4 percent) in fourth and fifth places respectively.

Japan maintained white/white pearl as its top color choice for vehicles, continuing at 28 percent of total market share. In the region, white pearl is often preferred for the small/compact vehicle segment. Silver held its second place rank with 24 percent and black was just behind with 22 percent of the market. Blue increased in popularity in the region by two percentage points, with an overall 10 percent popularity share for fourth place. Light purple metallic is also new for the region, and is becoming a trendy option for small/compact and intermediate vehicle segments.

In India, white is the leading color choice for vehicles, with 29 percent share in the market. Silver is just five percentage points back, at 24 percent. However, in a first among the regions surveyed, brown/beige (11 percent) is in third place for the Indian market. Gray and black follow at 9 and 8 percent respectively. Black/black effect (8 percent) is lowest in the ranks in India among all of the regions, with a fifth place finish.

South Korea’s affinity for silver (33 percent) for intermediate vehicles and black/black effect (26 percent) for luxury vehicles continued this year, ranking one and two, but white (18 percent) and gray (14 percent) continue to gain in popularity over the 2009 report.

South Africa and Russia – Growth Markets Important for Color Choice
The substantial growth of the automotive industry in South Africa was the impetus for its inclusion in this year’s report. White was overwhelmingly the most popular vehicle color choice in the region, at 35 percent, which is the highest percentage of any region covered in the report. Silver (24 percent) takes second and black/black effect combine for 14 percent. Another growth region, Russia, maintained black/black effect (21 percent) as its most popular hue, with silver and gray nearly tied for second place in the region. White vehicles in Russia account for just 16 percent of the market. Also of interest, the preference for green vehicles in Russia is 11 percent, the color’s only rank within the top five in this year’s report.

This year’s theme is Protection of Color, which showcases four distinctive themes and is being shared with DuPont automotive industry customers worldwide.

Protective Spirit: This group of colors showcases those that are most suited for luxury brands and SUVs. Dark and rich, these colors evoke high-class appeal. DuPont colors highlighted in this grouping include Treasure Chest, a copper brown with intense sparkle; Soul Mate, a deep blue pearl; and Beauty Care, a burgundy with a strong bluish hue.

Protective Couture: Trendy colors inspired by fashion, animation and specialized products are showcased in this collection. These colors are uniquely suited for a cross-generational audience. Intense chroma and pale muted hues showcase the breadth of this group. Parachute, a pale solid pink; Cloud Cover, a pearl gray tricoat; and Modern Macintosh, a brownish purple are included in this group, among others.

Protective Ambition: This collection represents colors that are most influenced by nature and the trend toward more ecologically friendly vehicles. Two types of colors resonate in this group, including nature-like colors for large trucks and adventurous appeal, such as Turtle Shell, an olive green pearl, as well as more serious colors that are technically savvy, including Cocoon Beige, a soft beige, and Patroness, a soft medium gray.

Protective Vision: High chroma colors are key to this collection, as they are best suited for consumers that want their vehicles to be seen on the road. Antitoxin is a solid bright lime green; Stinger Yellow is a bright shade of yellow with a gold sparkle; and Guardian Angel is a bright white tricoat. Sports cars, brand image vehicles, new model introductions and commercial fleet vehicles are prime candidates for this color group.

The DuPont trend show is styled for global review with customers worldwide. It consists of solid colors, metallics, tricoats, and tintcoat finishes designed for various vehicle types. Although there is a continuing emphasis on global vehicles, there are cultural and regional preferences that will continue to distinguish color popularity throughout the world.

DuPont is tackling some of the biggest challenges facing a growing population through science-based innovations and collaborations – including reducing dependence of fossil fuels. This includes paints and coatings for new cars and aftermarket applications such as collision repair, elastomers for hoses, belts and other parts; engineering plastics for molded components; electronics products for microcircuits and flexible and printed circuits; and a variety of polyester films. DuPont supports the global automotive and transportation industries with a vast array of innovations that reduce dependence on fossil fuels, reduce vehicle weight and improve fuel efficiency. The DuPont offering also includes glass-laminating products, fuel cell components, refrigerants and thermal protection materials. DuPont is working actively to introduce sustainable, bio-based materials into fabrics and engineering polymers and fuels. These products reduce dependence on petroleum resources, reduce vehicle weight and improve fuel efficiency.

DuPont (www.dupont.com) is a science-based products and services company. Founded in 1802, DuPont puts science to work by creating sustainable solutions essential to a better, safer, healthier life for people everywhere. Operating in more than 90 countries, DuPont offers a wide range of innovative products and services for markets including agriculture and food; building and construction; communications; and transportation.