We’re just a couple days away from the official debut of the highly-anticipated BMW 1-Series M Coupe. Originally, BMW decided to build just a limited 2,700 units of the 1-Series M Coupe, however, due to the positive response, BMW has lifted the cap and will continue to produce the car through Spring of 2012.

Usually, BMW creates a special-edition version at the end of the life cycle to send off the outgoing model – think something like the BMW M3 CSL, M3 GTS types.

So what will BMW do with the 1-Series M Coupe. Photo Rendering artist Jon Sibal decided to find out.

When asked if there is a possibility of a ‘CSL’ type version for the 1-Series M Coupe at the end of its life cycle, BMW said.

Anything is possible, we have ideas and the creativity to expand. In the end it all comes down to the reception of the car. 1M is more personal than any other M car. It has to be more upfront with the customer because it is developed entirely for the customer who want something pure. As it stands E82 production will be online till summer 2012, 1M will finish around the Spring, We have Cabrio production lasting till late 2012 in which they have produced a Cabrio model. We have a Cabrio unofficially. Reaction to the Coupe will determine the Cabrio’s existence as will the GTS/CSL type car.

Refresher: Power for the BMW 1-Series M Coupe will come from a 3.0L inline 6-cylinder bi turbo engine delivering 340-hp. Power is transferred exclusively via a 6-speed manual gearbox. There will also be many similarities to the chassis, brakes, and rear differential of the BMW M3. Production is expected to be limited 2,700 units. 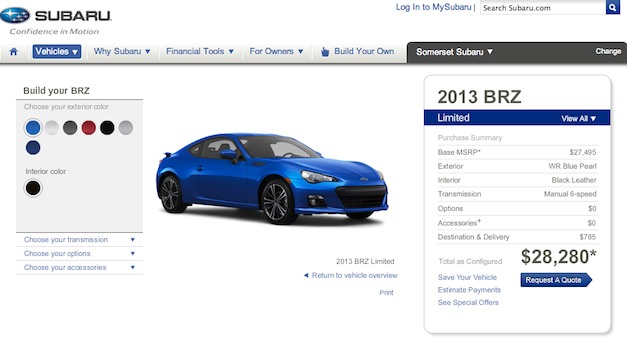 Build your own 2013 Subaru BRZ