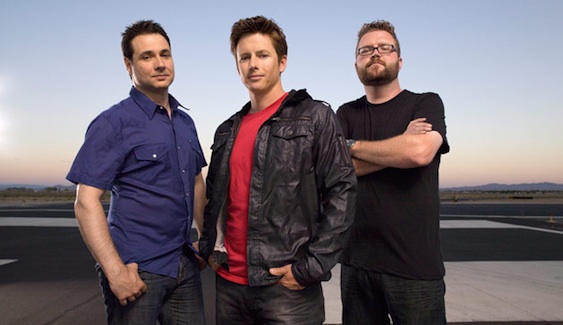 I’m sure many of you reading this review are car enthusiasts like myself and have become accustomed to watching Jeremy Clarkson, James May and Richard Hammond tear up the Top Gear track in Surrey. So more or less, many of us were skeptical on how the American adaptation of Top Gear UK would pan out. Well, I’ll tell you what we think here at egmCarTech.

Personally, I didn’t know what to expect from Top Gear America. I too, was skeptical thinking that it was going to be a waste of my one-hour. However, I found that many of us who were skeptical, were maybe expecting a little too much.

Altogether as a program, we here at egmCarTech think that Top Gear America doesn’t really seem all that bad and rather walked away from our television sets impressed. Of course, it wasn’t ground breaking like the original British version. But, the budget seems high and the basics of burning rubber in expensive exotic supercars and sports cars still remains intact, naturally.

However, there were some notable drawbacks of the show that didn’t exactly twist my insides like Top Gear UK does.

Overall, there was the feeling that the producers of Top Gear America may have tried a little too hard to copy the popular, witty British humor that us Top Gear enthusiasts are used to. Additionally, any TV-goer with the slightest bit of knowledge would notice that the presenters—Adam Ferrara, Tanner Foust, and Rutledge Wood—seemed to lack some of the chemistry and the passion that made the original Top Gear crew so famous and entertaining. And Top Gear connoisseurs know the importance of the show’s presenters. They seemed a bit nervous and lacked confidence in their roles on the show, but seeing as how popular Top Gear UK is, they have very big shoes to fill with high expectations. We have no doubt that they may get better as the season progresses. Even when Top Gear UK first debuted in 2002, the presenters didn’t exactly have the chemistry that they have now, mostly due to the fact that James May wasn’t apart of the crew until Season 2, and by season 3, the three had became the Top Gear presenters that we’ve known well for the past seven or so years.

Pacing was also slightly off. For example, a friend of mine pointed out that when hosts Rutledge Wood and Tanner Foust were being chased by the Cobra attack gunship in a Dodge Viper, the scene where they pulled into the car wash had lost the suspense because Foust and Wood decided to discuss the Dodge Viper in a rather boring manner.

Visually, the camera work, editing and cinematography both in the studio and out of the studio have a ways to go before they match the masters of Top Gear UK.

Aside from these drawbacks however, the content is very much entertaining and will definitely give you a couple laughs and keep you interested.

While there are drawbacks, they can’t exactly be set in stone. They are aspects of the show that more or less need refining, a little smoothing around the edging. Keep in mind that it was only the premiere and we still have the entire season to see how things pan out. And even if it takes the entire season plus some to work out these kinks, Top Gear USA bests anything other motoring program that’s offered in the US…especially *cough*Speed Channel*cough*.

Sure, we’re used to the best and the greatest of three middle-age British men—one of them fat, balding and with a gut the size of Guinness Brewery; one who routinely gets his teeth whitened and is vertically challenged; and one who has the haircut of a cocker spaniel—knocking on each other and messing around with cars. But in my opinion, that’s not what Top Gear USA set out to do. We feel that Top Gear USA’s goal was to take the great original version, which started in Great Britainland, and give it a little American flair. And by all means, that’s not a bad thing. Australia came out with their own version of Top Gear back in 2008. And while that too received negative reviews, apparently it isn’t terrible nowadays.

The best similar example I can think of was NBC’s adaptation of the British show, The Office. While the British show wasn’t exactly well known in the US of Americaland, it was a smash hit in Great Britainland. And US, being a capitalistic society, decided to make our own American adaptation and it has since then become one of the most popular shows on television.

So does Top Gear USA have the potential to match the success of the original program? Simply put, I know I’ll be waiting to watch the next episode this Sunday.