General Motors announced today that it will invest $163.2 million in its operations in Flint, Bay City and and Defiance, Ohio, to support engine production of the Chevrolet Volt, Cruze and a new Chevy small car to be built in the United States. The investment will save 184 jobs at three sites.

“This investment is essential in ensuring we can meet the expected high demand for the Chevrolet Volt, Chevrolet Cruze and a small car that will be produced at our Orion Township facility,” said Kathleen Dilworth, Flint Engine Operations plant manager. “These three facilities will continue to play a key role in GM’s resurgence and efforts to bring to market vehicles with segment-leading fuel economy.”

The move brings GM’s total investment in the U.S. to more than $3.3 billion since it emerged from bankruptcy in July 2009. It has created and retained more than 8,000 jobs in 21 U.S. plants.

Check out the PR stuff after the jump

DETROIT – General Motors today announced a $163.2-million investment in its operations in Flint and Bay City, Michigan, and Defiance, Ohio, to support engine production for the Chevrolet Volt, Chevrolet Cruze and a new Chevrolet small car to be built in the United States. The investment will protect 184 jobs at the three sites.

The announcement brings the total of new U.S. investment to more than $3.3 billion, and GM has created or retained more than 8,000 jobs in 21 U.S. plants since emerging from bankruptcy in July 2009.

The investments will be used to support increased production of the Ecotec 1.4-liter engine that is used in the Chevrolet Cruze and a 1.4L variant used in the Chevrolet Volt. Flint Engine is expected to start production of 400 engines a day in early 2011 and ramp up to 800 engines a day in late 2011. The newest investment increases its capacity to 1,200 a day in late 2012.

Bay City will increase connecting rod and camshaft production and Defiance will boost output of engine block and crankshaft castings.

In less than two years, GM has invested nearly $700 million and protected more than 600 jobs at the three facilities.

“The UAW has and will continue to play a key role in GM’s revival,” said Terry Everman, UAW Local 599 chairman. “Our members have demonstrated that they are more than capable of building the latest and greatest in technology that will power some of the most fuel-efficient vehicles in the market.”

The Ecotec 1.4L turbocharged engine for the Chevrolet Cruze is like two engines in one with the fuel economy of a small displacement engine and the performance of a larger engine. The 1.4L engine helps the Cruze Eco achieve a segment-leading EPA-estimated 42 highway mpg.

The 1.4L naturally aspirated engine enables range extension for the Chevrolet Volt. After the battery is depleted the on-board engine-generator creates additional electricity to power the car for hundreds of additional miles of extended range.

Videos: New Chevrolet Volt ads remind us that the car still needs gas… every now and then

September 23, 2011 Omar Rana Comments Off on Videos: New Chevrolet Volt ads remind us that the car still needs gas… every now and then 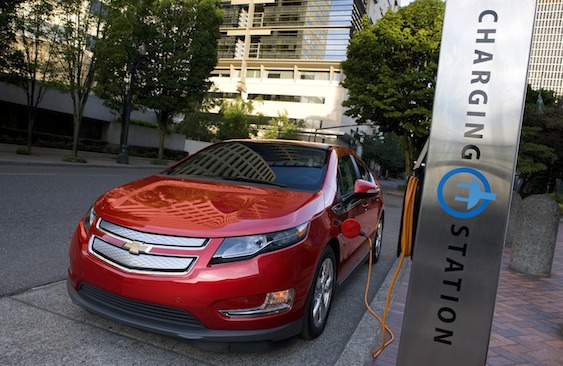 Even with an identity crisis the Chevrolet Volt qualifies for a $7,500 tax credit

October 14, 2010 Omar Rana Comments Off on Even with an identity crisis the Chevrolet Volt qualifies for a $7,500 tax credit