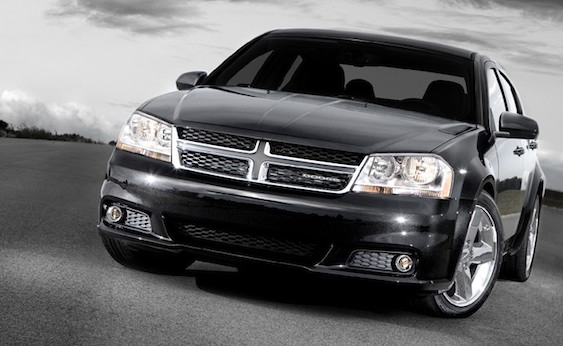 Here it is – your first look at the 2011 Dodge Avenger. Unlike its Chrysler 200 sibling, the 2011 Avenger seems to be more humble about its redesign but does get a returned suspension, a new powertrain lineup and a nicely upgraded interior.

That’s not to say that the exterior was totally left untouched. Designers at Chrysler definitely refined and smoothened the design with a redesigned grille, new headlamps and tail lamps along with an aggressive lower front fascia. The interior gets completely redesigned with a more sporty appeal and soft-touch materials. The 2011 Dodge Avenger features a couple of two-tone interior color schemes, leather and cloth seating and accent stitching.

Powertrain options for the 2011 Dodge Avenger feature a new 2.4L World Gas Engine mated to a new 6-speed transmission along with Chrysler’s new Pentastar V6 engine (also mated to a 6-speed) making 283-hp (an increase of 20-hp) and 260 lb-ft.

An All-new Dynamic for the 2011 Dodge Avenger: A Mid-size Sedan Designed, Engineered for Spirited Performance

The Avenger”s “fun to drive” quotient rises exponentially for 2011 with a significantly upgraded suspension to give drivers agile, confident, handling performance in all driving situations, whether it”s a spirited adventure on twisty roads or an emergency maneuver.

Dodge engineers retuned or redesigned virtually every part of the suspension for 2011, including 26 of 30 suspension bushings. The suspension and the geometry were completely rethought. The track is an inch wider, tire width increased from 215 to 225 millimeters and the vehicle is 12 millimeters lower in the front and 6 millimeters in the rear for a more aggressive stance. Customers will feel more confident when driving the new Avenger because of less body roll, less vehicle shake, improved isolation, better steering precision, response and feel and the increased grip of new premium tires.

A new and improved powertrain lineup also contributes to the 2011 Avenger”s driving experience. The vehicles has a standard 2.4-liter World Gas Engine, which has been recalibrated and is now available mated to a new smooth-shifting six-speed transmission for an exceptionally fun and fuel-efficient driving experience. Avenger customers also can opt for the new Pentastar V-6 engine mated to a six-speed automatic transmission that gives customers the best of both worlds ““ best-in-class 283 horsepower (an increase of 20 percent compared with the engine it replaces) and 260 lb.-ft. of torque (an increase of 12 percent) combined with competitive fuel economy.

Designers developed the 2011 Dodge Avenger with new “soft touch” armrests and instrument panels, new, premium interior finishes for touch points that are not only pleasing to the touch but also to the eye. They also redesigned the heating and cooling outlets in the instrument panel to make them more appealing and better functioning. The 2011 Dodge Avenger also offers one of the quietest cabins in the segment with 45 new or upgraded sound-deadening treatments integrated throughout the vehicle.

The standard mid-size sedan segment is the largest vehicle segment in the United States, with more than 1.6 million vehicles sold in 2009. The 2011 Dodge Avenger is uniquely positioned as an alternative for consumers looking for a sedan with more style, personality and performance than the segment is traditionally known for.