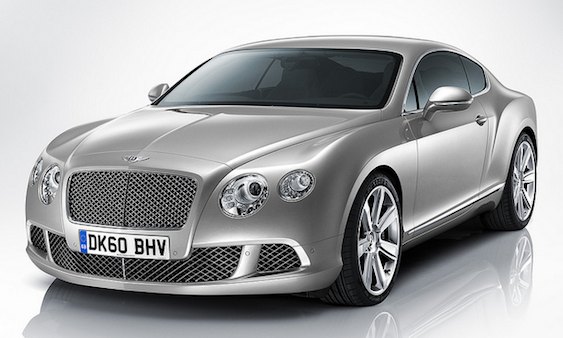 At the 2010 Paris Motor Show this week, Bentley will take the wraps off of the new 2011 Continental GT, which will go on  sale in the first quarter of 2011.

“Paris was the perfect stage for Bentley to show the first Continental GT concept in 2002. The public reaction to this bold, original design statement inspired us to bring the GT to life. It is exciting and fitting to begin this new chapter in the Continental story in the city that launched the first car in such style,” said Alasdair Stewart, Member of the Board for Sales and Marketing.

Now that’s cool and all but Bentley also dropped the pricing details on the 2011 Bentley Continental GT. Prices in the United States will start at $189,900, an increase from $182,200.

Take the jump for the high-res gallery and the press release.

Refresher: The 2011 Bentley Continental GT 6.0L twin-turbo W12 engine making 567-hp and 516 lb-ft of torque. Mated to a ZF 6-speed automatic with quickshift and steering wheel-mounted paddleshifters, 0 to 60 mph comes in 4.4 seconds with a top speed of 198 mph. A V8 will be available to order in late 2011 ““ technical details have yet to be released.

(Paris – 29 September, 2010) Paris has played a significant role in Bentley’s history and is set to do so again with the new Continental GT making its official public debut at the prestigious Mondial de l’Automobile tomorrow.

Since that first, high-impact Paris debut in 2002 over 46,000 Continentals (of which nearly half have been the GT coupe) have been built by Bentley’s craftsmen and women at the Crewe factory in Cheshire, England. The GT quickly established a reputation for stirring high performance, handcrafted luxury and everyday practicality and usability.

The new Continental GT unveiled in Paris tomorrow builds on this success with the W12 engine now producing even more power (575 PS / 567 bhp / 423 kW) and torque (700 Nm / 516 lb ft) as well as even sharper acceleration times throughout the range. The luxurious cabin offers increased stowage space, an additional 46 mm of legroom for back-seat passengers and a state-of-the-art 30 GB infotainment system supported by touchscreen technology.

But perhaps most dramatic of all is the 2011 GT’s appearance.

This new Continental takes its design inspiration from the original GT which in turn was inspired by the 1950s R-Type Continental but moves the story on. Signature styling cues remain but the sculptured new body, produced using the latest construction techniques, delivers even crisper, more highly defined feature lines and form to every area of the exterior design. The GT’s new look is bolder and more athletic than ever before.

Bentley Motors is also releasing pricing today (see table below) and has confirmed that deliveries to customers will start in the first quarter of 2011. The company’s dealer network will be able to support customers wishing to place orders from next month onwards.

Rumor: Ford GT to return as a hybrid supercar

February 3, 2011 Omar Rana Comments Off on Rumor: Ford GT to return as a hybrid supercar