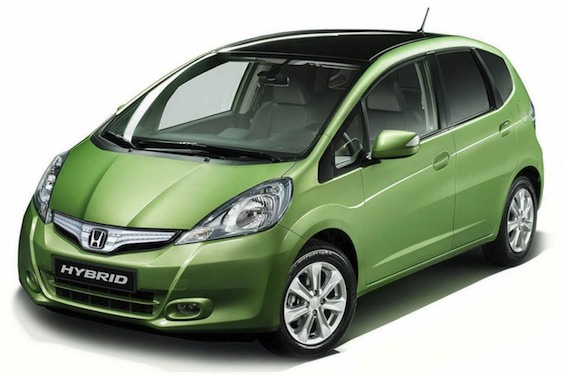 Ready to make its debut at the 2010 Paris Motor Show, Honda revealed the first two images and some details on the new Honda Jazz Hybrid. The model, which will be known as the Honda Fit Hybrid in Japan, marks the first time a parallel hybrid vehicle has been available to B-segment customers.

The Honda Jazz Hybrid gets its power from the same 1.3L i-VTEC gasoline engine mated to the company’s IMA system and a CVT gearbox that is found in the Insight and the CR-Z. Like the Insight and Civic Hybrid models, the Jazz Hybrid will be able of driving on the electric motor alone under some medium and low speed conditions. No word on official fuel-economy figure but it is expected to be close to that of the Honda CR-Z.

The Jazz hybrid will go on sale in some European markets in the early part of 2011. The new hybrid will also be available in a range of existing colors plus a new Lime Green metallic. No word on if the Honda Fit will make it to the United States.

The launch of the latest addition to the practical Jazz line-up will mark the first time a parallel hybrid vehicle has been available to B-segment consumers. The IMA hybrid motor and control system are shared with the Insight and CR-Z hybrids, taking advantage of the proven reliability of this important technology. With almost two decades of development and 10 years of sales behind it, the Honda IMA system has proven itself to be a flexible and dependable technology, with over half a million vehicles on the road benefitting from its combination of low emissions and fuel economy.

The new model will feature the same engine as the Insight hybrid, the 1.3 liter i-VTEC engine is combined with a CVT gearbox with an electric motor sandwiched between the two to create a parallel hybrid system. Like the Insight and Civic Hybrid models the Jazz Hybrid will be capable of running on the electric motor alone under some medium and low speed conditions.

Much of the Jazz’s practicality is derived from its height but despite being taller than the Insight, the Jazz Hybrid manages to maintain fuel consumption and CO2 emissions on comparable levels.

Visually the Jazz hybrid is distinguished from the current Jazz range with revised headlights, with a blue surround, clear rear lights, new front grille, restyled bumpers and a chrome tailgate garnish. The new hybrid will also be available in a range of existing colors plus a bespoke Lime Green metallic.

Inside the cabin is also given a fresh look with darker single color dashboard, which contrasts strongly with the blue lighting of the dials and stereo. The new hybrid is also available with leather trim, the first time this has been available on a Jazz model in Europe. The Jazz hybrid will go on sale in some European markets in the early part of 2011, prices and full specifications will be announced in due course.

Along with Jazz Hybrid, Honda stand will display a special edition of European made Civic, the 2011 model year Insight, CR-Z, the current petrol Jazz, CR-V, Accord and Accord Tourer, as well as the sports touring motorcycle VFR1200F equipped with “state-of-art” V4 engine, and a stylish PCX scooter with lower emission idle-stop 125cc engine.