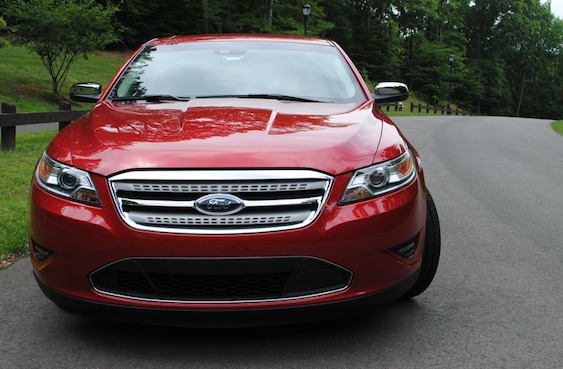 We had our first encounter with the totally reengineered and redesigned 2010 Ford Taurus back in October, when FoMoCo dropped a top-of-the-line 365-hp 2010 Ford Taurus SHO off at our garage. With a starting MSRP of $37,770 however, that vehicle is certainly not one designed for the masses.

More recently, Ford gave us the pleasure of testing the Taurus Limited; a fully optioned out Taurus that derives its power from a 263-hp Duratec 3.5-liter V6 engine. With prices starting at $25,995 (for the SE model) the non-SHO Taurus models are ones to consider when shopping in the midsize segment.

The Life and Times of the Ford Taurus:

A decade prior to the 2010 Ford Taurus being rolled off the assembly line, sales of the midsize sedan were such that Ford would eventually kill production, as the better overall quality of vehicles being offered by Japanese competitors eroded the Taurus” customer base. On October 27, 2006, Ford idled its Atlanta plant, and there closed a chapter in the history of the Ford Taurus.

The full-size sedan, the Ford Five Hundred would replace the Taurus as Ford”s flagship vehicle, but the death of the Taurus remained a controversial matter; many believed that the Taurus was discontinued because it was unable to compete in the expanding sedan market, others blamed Ford of neglecting the badge so that it eventually became a “˜rental car”, and others still thought that Ford had starved the brand of new technology, engineering, and marketing that its competitors were not of their vehicles.

Alan Mulally of Boeing, was named President and CEO of Ford on September 5, 2006. He thought it was completely wrong of Ford to rid its lineup of the car that had long been the company”s bestseller, and one of his earliest decisions was to resurrect the Taurus badge.

We tip our hats to Mr. Mulally. It is 4 years after the fact, and the Taurus is back, and with a vengeance. The 2010 Ford Taurus is a completely reinvented vehicle from its brand new design to its all-new engineering, and a killer marketing campaign to boot.

When Mulally came to Ford he wasted no time, and rebadged the Five Hundred as the Taurus; a move that was the subject of much criticism. Mulally would shut the nay-sayers up at the 2009 NAIAS in Detroit when he unveiled to the public the 2010 Ford Taurus. The all-new vehicle was sleeker, sportier, and much more aggressive than its ancestors; all in all, it was a car that gave Ford something they could viably compete against the Japanese with.

Though the 2010 Taurus is a behemoth of a car, it possesses an air of refinement. The recessed parking lamp frames serve so as to offset the aggressiveness created by the three-bar grille with massive “˜Ford” badging.

The car sits atop a 112.9 inch wheelbase measures 202.9 inches long and 76.2 inches wide. The car also has a bit of height as it measures 60.7 inches tall. Those dimensions make the Taurus bigger than most of the competition including the Accord, Camry, Malibu, 300, and Maxima. When standing beside the car, one may easily feel as they are standing next to a crossover and not a sedan, which may detract some buyers in spite of the impressiveness and sleekness of the new design.

When compared to that of the competition, the interior of the Taurus is impressive to say the least. The Taurus really excels at providing a plush, rich, luxurious interior while keeping a reasonable price. One-second inside this car and its relationship to the Lincoln is apparent.

While the interior definitely exudes poshness, the tech savvy will also be impressed with the offering of gadgets Ford has provided. The model you choose (SE, SEL, or Limited) will determine which features come standard and which are optionally available, but Ford offers push button start, adaptive cruise control, collision warning with brake support, SecuriCode keyless entry, automatic high-beams, rain-sensing wipers, blind spot information system, cross-traffic alert, the impressive Microsoft SYNC interface, voice-activated navigation with Sirius Travel Link, rear-view camera, Sony audio system with iPod and Bluetooth connectivity, and much more. Our test Taurus Limited model was fully optioned out and we got to enjoy all of the above leaving us plenty of wonderful gadgets to play with over the span of a week.

We really only have two gripes with the interior, and they”re really pretty petty matters; while it is certainly roomy, the interior is a tad bulky and oversized, and the trunk release button is awkwardly positioned on the passenger side of the dash ““ that”s about it.

With comfortable seating for five, ample trunk space of 20 cubic feet, and 60/40 fold-down rear seats, one could even consider substituting the Taurus for a crossover, should they be so inclined.

When compared to the 3.5L twin-turbocharged V6 EcoBoost engine on the SHO that put out 365-hp and 350 lb-ft of torque, the 263-hp 3.5L Duratec V6 was a bit un-dramatic. That is not to reflect negatively on the engine however, as the Taurus weighs in at a solid 4,015 lbs before the addition of an all-wheel-drive system which brings that figure up to 4,224 lb. Our test car was outfitted with the AWD and Ford’s 6-speed electronically controlled automatic overdrive with paddle activation. To put this all into perspective, it took us 7.9 seconds to reach 60 mph with the 263-hp engine.

When it comes to fuel-economy, the 2010 Ford Taurus averages 18/28 mpg when mated to a FWD system and 17/25 mpg when purchased with the optional AWD system. Our AWD 2010 Taurus Limited returned around 20 mpg during the week-long test. Those figures compare favorably to the Taurus’ competition. Also, filling up your Taurus won’t really cost you an arm or leg as Ford recommends unleaded regular fuel.

The Taurus definitely delivers on performance. Granted, the handling is less than stellar, but the breaking is satisfactory and the ride is smooth. This is just fine however, as buyers are generally not drawn to this segment to find a vehicle that will perform well under racing conditions.

The 2010 Ford Taurus has transcended its role as basic family sedan; in all actuality is more akin to a Lincoln without the badging, which definitely gives the car greater appeal and makes the pricing seem just right.