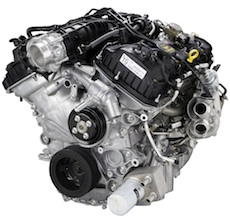 Ford has been pushing their new, environmentally friendly Eco-Boost engines, and this talk has been substantiated with the implementation of the engine into many different lines- including one of Ford”s most distinguished model lines, the F-150. The 2011 F-150 will have 4 new engines, all coupled to a new, more fuel efficient 6-speed automatic transmission.

The smallest engine, a V6 that is the most fuel efficient in its class, generates 300 horsepower and 275 lb-ft of torque. This V6, along with a 5.0 L V8 that makes 360 hp and 380 lb-ft torque, will be available immediately. In addition, two more unique engines will come in early 2011. A 6.2 L V8 developing 411 hp and 438 lb-ft of torque that come with the Raptor and Super Duty, will now become the premium engine offering on the Ford F-150. It will also offer 11,300 pounds maximum trailer tow.

A 3.5 L V6 Eco-Boost will also be released. This revolutionary engine gains 20% fuel economy on the 5.4 L V8 from the old F150, and improved intake and exhaust camshafts and manifolds make this Eco-Boost V6 an engine worth watching. In addition, precise air ventilation and natural aspiration, as well as ultra-efficient manifold, cylinder heads, and valvetrains, the 3.5 L V6 Eco-Boost in a Ford F-150 should prove revolutionary in the truck market.

Available at launch are a 3.7-liter V6 and a 5.0-liter V8, each with fuel-saving and performance-enhancing twin independent variable camshaft timing (Ti-VCT) technology, and a version of the 6.2-liter V8 that is the base engine in the 2011 Ford F-Series Super Duty. A 3.5-liter EcoBoost engine, specially tuned and calibrated for the F-150, will be available in early 2011. Each of the engines offers an unequaled combination of attributes that matter most to F-150 customers: torque, horsepower, fuel economy, performance, durability, reliability and capability. The 2011 F-150 lineup will deliver best-in-class fuel economy. When the 3.5-liter EcoBoost engine joins the lineup, the 2011 F-150 will have up to 20 percent better fuel economy compared with the outgoing 2010 F-150.

“Our new engine lineup allows greater flexibility for customers to select the powertrain choice that best suits their needs,” said Barb Samardzich, vice president of Powertrain Engineering. “We are in the midst of a powertrain revolution, with 30 new powertrains over the next two years, and our loyal F-150 customers are the next ones to benefit.”

Extensive testing program to ensure truck application
To ensure the highest quality, most reliable engines, Ford engineers studied the warranty history of the outgoing engines and developed testing procedures based on the real-world driving experiences from current F-150 drivers.

Prototype engines underwent a wide range of tests to ensure complete compatibility with truck application and truck durability, with all components and systems passing testing to the equivalent of 150,000 miles. Components such as the exhaust manifolds and the crankshaft (forged steel) were upgraded, piston-cooling jets and oil coolers were added, and engines were specifically calibrated for improved heavy-duty operation and durability in F-150.

“Truck customers demand an engine that delivers outstanding low-speed torque to help tow or move heavy payloads, and sustained high-load, low-speed operation is a key attribute they look for,” said Samardzich. “The engine lineup for the 2011 Ford F-150 has been tuned specifically for truck operation needs and optimized for fuel economy. The result is a lineup that delivers class-leading towing and payload capability with outstanding horsepower, torque and fuel economy.”

Here are the highlights of each new engine:

3.7-liter four-valve Ti-VCT V6
The 3.7-liter will be the most powerful, capable and fuel-efficient base V6 of any truck in its class. Key attributes include:

The 3.7-liter V6 powering the base 2011 F-150 is the latest application of the award-winning Duratec® V6 engine, with additional technology and upgrades for truck application. In particular, more work was done on the bottom end of the engine, a strong point of all Duratec V6 engines.

“This is a well-designed engine with a massive amount of attention to detail around the block and the structure of the block,” said Jim Mazuchowski, V6 engines program manager. “This attention to the stiffness and rigidity of the bottom end, how the engine is fastened with four-bolt mains and two side bolts, enhances durability and NVH (noise, vibration and harshness).”

Other enhancements for durability include a forged-steel crankshaft, cast-iron exhaust manifolds and a die-cast aluminum oil pan, which supports a 10,000-mile interval for oil changes. The design of the cylinder bore and piston rings has been optimized for efficient lubrication.

While this 5.0-liter V8 engine is similar to the one powering the 2011 Mustang GT, it has several important differences to optimize it for the harsh duty cycle truck customers demand. First, the camshafts were tuned to improve low-speed torque, which is key to truck customers. Also, the 10.5:1 compression ratio was optimized to reduce knock tendency at lower engine speeds while towing.

The hardware added to the 5.0 specifically for F-150 includes: an additional oil cooler, which helps extend the life of the oil to 10,000-mile intervals; foam covers for the fuel injectors to reduce NVH; and cast exhaust manifolds for improved durability. The new aluminum block is 70 pounds lighter than the 5.4-liter V8, which aids fuel economy and improves handling. The engine”s forged-steel crankshaft also ensures durability.

6.2-liter two-valve single-overhead-camshaft V8
The 6.2-liter V8 is a premium engine offering on the 2011 F-150, with an expanded offering to F-150 SVT Raptor and other specialty applications. Its attributes include:

“This engine has tons of torque, and already has been proved in the field with both the F-150 SVT Raptor and Super Duty,” said Harrison.

3.5-liter Ti-VCT EcoBoost
The 3.5-liter EcoBoost is a premium engine offering available after launch with power comparable to a naturally aspirated V8 and projected class-leading fuel economy. Its attributes include:

For the first time, a six-speed automatic transmission is standard in F-150 on all engines. Several available enhancements have been added to the proven 6R80 transmission to help F-150 customers tow more easily, including SelectShift with both progressive range select and manual functions.

With SelectShift, customers can get full manual function by pulling the shift lever into “M” for manual mode and then select the gear desired by pressing the “+” button for upshifts or the “-“ button for downshifts. The control system will hold that gear for a full manual transmission feel.

The new engines for the Ford F-150 follow the all-new engine lineup for the 2011 Ford F-Series Super Duty introduced earlier this year and highlighted by the 6.7-liter Power Stroke® V8 turbocharged diesel, which delivers best-in-class torque, horsepower and fuel economy.

“The new powertrain lineup for the 2011 F-150 will provide a wide range of choices to customers to suit their needs, each tested for maximum durability and reliability with outstanding fuel economy,” said Samardzich.

A view from the front: 2011 Cadillac CTS Coupe