President Obama said on Thursday that taxpayers will in fact be repaid for the portion of the auto bailout that his administration infused, in his praise of the industry. According to the most recent government estimate, taxpayers stand to lose about $24.3 billion on the entire bailout ($25 billion was advanced by Bush before leaving office, and Obama put in about $60 billion), and that number is expected to decline further, according to Treasury Secretary Timothy Geithner.

According to a White House report released Thursday, the auto industry added 55,000 jobs in the year ending June 30, and the major American manufacturers are expecting to add up to 11,000 jobs by the end of this year. These figures represent the best growth in the industry since 1999.

Obama is visiting Detroit today in his first trip there as president. He will be meeting with Ed Whitacre and Sergio Marchionne, as well as Bob King, president of the UAW, and will take tours around Chrysler”s and GM”s facilities. Accompanying the president are Transportation Secretary Ray LaHood, auto czar Ron Bloom, and auto recovery czar Ed Montgomery. 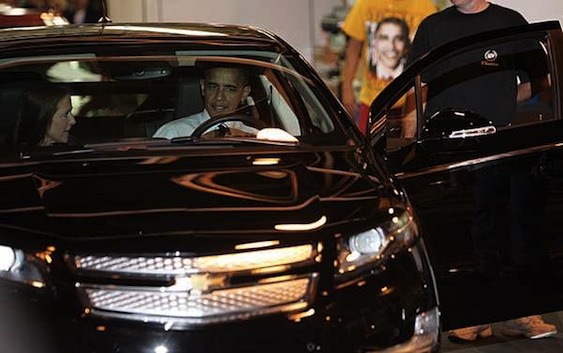 President Obama to skip out on 2010 Detroit Auto Show