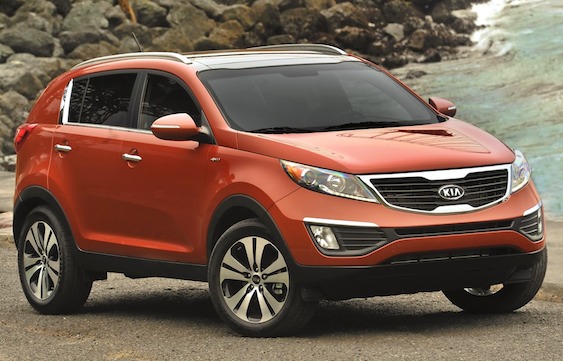 The 2011 Kia Sportage made its U.S. debut at the 2010 New York Auto Show and is now ready to hit dealerships this fall.

The 2011 Kia Sportage will be available in three trim levels including Base, LX and EX. Prices for the base 2011 Sportage will start at $18,295 (plus a $695 destination charge). Standard features on the base model include air conditioning, power windows, door locks and mirrors, SIRIUS Satellite Radio capabilities with three months trial service, MP3 connectivity and Bluetooth connectivity. The 2011 Sportage LX will start at $20,295 and will add standard outside mirrors with LED turn signal indicators and privacy glass. The Sportage EX will offer everything from base and LX plus 18-inch alloy wheels, leather-wrapped steering wheel and shift knob with prices starting at $23,295.

All 2011 Kia Sportage models come standard with a 2.4L DOHC 16-valve 4-cylinder engine with CVVT making 176-hp. Estimated fuel-economy figures come in at 22/31 mpg (city/highway). A 2.0L 4-cylinder turbo GDI engine making 270-hp will be available in the 2011 Kia Sportage SX, which will go on sale shortly after the Base, LX and EX model.

Buyers can opt for a either a front-wheel-drive configuration or Kia’s Dynamax all-wheel-drive system paired to a 6-speed manual or a 6-speed automatic.

Kia did not announce pricing option on the UVO powered by Microsoft hands-free infotainment system.

SAN FRANCISCO, July 20, 2010 ““ The all-new 2011 version of Kia”s venerable Sportage CUV takes its design “Kue” from the concept vehicle of the same name that was shown during the 2007 North American International Auto Show (NAIAS) in Detroit. Completely and beautifully redesigned, Sportage offers more urban and fluid silhouettes than its predecessor while retaining the desirable benefits and functional features of the popular CUV. Sportage also offers increased levels of performance and efficiency, comfort and convenience and the latest in-vehicle technologies incorporated into all of Kia”s latest new vehicles.

“Adding world-class design and cutting-edge technologies to an already successful value-packed CUV equation, the all-new Sportage offers Kia the opportunity to attract an entirely new and more sophisticated customer,” said Michael Sprague, vice president marketing & communications, Kia Motors America (KMA). “The 2011 Sportage retains the functionality and versatility of the previous generation model but repackages the CUV into a sleek, modern and bold style with new proportions and a completely new look to help elevate the Kia brand further as a world design leader.”

Available later this month, the 2011 Sportage offers image-conscious yet practical consumers more power (176 hp) and improved fuel economy along with the options of a panoramic sunroof, navigation, push-button start, rear camera display, LED daytime running lights and an air-cooled driver”s seat (a compact CUV segment first). However, what first draws attention to the new CUV is the visceral connection drivers make with the striking new design of the all-new Kia Sportage. Also expected to be available in late 2010 is the UVO powered by Microsoft®1 in-vehicle communication and entertainment system based on the Windows Embedded Automotive platform.

“An increasing number of consumers are craving and expecting connected experiences in their vehicles including being able to quickly and directly access music files, change radio stations and make or answer phone calls through voice or touch-activated controls,” said Mukund Ghangurde, director of product management for Microsoft”s Windows Embedded business. “It”s exciting to see Kia Motors embrace the power of the Windows Embedded Automotive platform to deliver Kia UVO. We look forward to our continued partnership to deliver connected and engaging in-vehicle experiences for drivers.”

Available in three trims ““ Base, LX and EX ““ pricing for the dynamic compact CUV will begin at $18,2952 for the base trim, offering standard convenience features, including air conditioning, power windows, door locks and mirrors, SIRIUS® Satellite Radio capabilities with three months complimentary service3, MP3 connectivity and Bluetooth®4 wireless technology. LX will start at $20,295* and will include standard outside mirrors with LED turn signal indicators and privacy glass. Moving up to the EX trim level offers a beginning price of $23,295* with standard features such as 18-inch alloy wheels, leather-wrapped steering wheel and shift knob.

With a high beltline, sweeping angles and more pronounced wheel flares than its predecessor, the team at Kia”s U.S.-based design center in Irvine, Calif. aimed to convey an even more demanding road presence within Sportage”s compact size by emphasizing its hunkered-down position. The all-new 2011 Sportage projects a modern and clean CUV and greatly expands beyond the current generation”s basic and reliable appeal. The full-sectioned body, defined by a spearing shoulder line throughout the length of the car, helps to visually connect the headlamps and tail lights. The crispness of this line, together with the lowered body, offers a distinct sense of precision while the pronounced C pillar gives a sense of solidity and balance when viewed from the side.

Drawing generously from the distinct styling elements of the Kue concept, the 2011 Sportage”s front end proudly displays the new face of Kia, the brand”s signature grill, with dramatic swept back headlamps, tabbed grill outline and a distinctive lower fascia treatment. The dynamically sculpted hood, framed by a distinctive windshield design, adds to Sportage”s fresh appeal. The rear view offers a clean and contemporary look with pronounced unique tail lights set solidly within the rear lift gate. Longer, wider and lower than the previous model, the all-new CUV successfully retains the key features, including a commanding driving position and of security and powerful road presence, which helped make the second-generation Sportage so popular among consumers.

Sportage”s sleek aesthetic design from the exterior flows seamlessly into the interior, establishing an inviting and comfortable ambience with well-appointed features and the availability of numerous convenience and technology features. With the signature three-pot instrument cluster set prominently within the dash, Sportage”s interior exudes contemporary design and an upgraded driving experience.

Impressive technology features also come standard throughout, including an AM/FM/CD/MP3/Sat audio system with SIRIUS® Satellite Radio capabilities with three months complimentary service. Also standard on both trims are auxiliary and USB audio input jacks for connecting with MP3 players and Bluetooth® wireless technology connectivity with steering wheel-mounted voice activation controls to enable hands-free operation for compatible mobile phones. The 2011 Sportage also will be among the first Kia models to offer UVO powered by Microsoft®, an advanced hands-free in-car communication and entertainment system (standard on EX models) that enables drivers and passengers to answer and place phone calls, receive and respond to SMS text messages, access music from a variety of media sources and create custom music experiences. HD Radio® also will be made available to enhance listening enjoyment.

The all-new Sportage comes standard with a 2.4-liter DOHC 16-valve four-cylinder engine with Continuously Variable Valve Timing (CVVT), offering more power (176 hp) and better fuel economy (22/31) than the previous 2.7-liter V6 engine. A more powerful but extremely fuel efficient 2.0-liter turbo GDI engine delivers V6-type power with a four-cylinder engine that produces 270-plus horsepower also will be available in the 2011 model year. Offered with either a front-wheel drive (FWD) or a Dynamax™all-wheel drive (AWD) configuration paired to either a six-speed manual transmission (Base) or a six-speed automatic transmission, consumers will have a variety of powertrain combinations to fit their driving needs. The six-speed automatic transmission, first seen on the 2011 Sorento CUV, is a proprietary design for Kia that was designed, engineered and built specifically for Kia vehicles, making the brand one of only three manufacturers to employ such a transmission. All automatics feature Sportmatic® clutchless shifting.

Perfectly suited for on-road driving through the city or on the highway, the FWD configuration offers an efficient package with responsive acceleration, enhanced fuel economy and impressive ride and handling. For drivers who typically face more difficult road and weather conditions, the AWD powertrain provides even more possibilities.

The Sportage”s Dynamax™ AWD system, co-developed by Kia Motors Corporation and Magna International, Inc., continuously monitors driving conditions and anticipates AWD system requirements, compared to other common AWD systems which can only react to conditions after they occur. This offers drivers the benefits of improved lateral stability while cornering as well as the removal of unintended over and under steering by reducing unwanted traction to the front and rear axles. Aimed at achieving increased torque and improved performance on every surface, Dynamax™ offers true AWD for drivers who want an exciting driving experience with enhanced safety and performance.

Sportage”s AWD design delivers 100-percent of engine torque to the front wheels during normal driving conditions, enhancing fuel economy, however when wheel slippage is detected a percentage of the torque is automatically transferred to the rear wheels to help maintain forward momentum. When driving in slippery conditions, such as rain, snow, mud, unpaved roads or off-road, the driver can manually select the “Lock Mode,” distributing torque evenly between front and rear axles up to a speed of 25 mph for enhanced stability.

The 2011 Sportage is all-new, including its platform, which has been completely redesigned for the new CUV. With an overall length of 174.8 inches, overall width of 73 inches, wheelbase of 103.9 inches, Sportage is longer, wider and lower than its predecessor, enhancing handling and aerodynamics. Built on a unibody frame, Sportage utilizes independent front-and-rear suspension systems. MacPherson struts are used in the front and have been fine-tuned to improve feel and stability, while new side-load coil springs reduce friction. An all-new, multi-link rear suspension system is used in conjunction with new dampers and coil springs mounted separately to minimize intrusion into the cabin and trunk space and add to Sportage”s handling.

The newly engineered suspension offers the same comfortable ride as the previous generation but also delivers improved handling characteristics with more precise responsiveness to driver input. Both the front and rear suspension systems are mounted on a lightweight hydro-formed subframe, to help isolate the occupants from irregularities in the road surface.

Significantly quieter and more refined than its predecessor due to an aggressive series of NVH reduction measures, the all-new Sportage employs a new bodyshell design with greater use of high tensile strength steel.

Like all Kia vehicles, the 2011 Sportage is equipped with a long list of standard safety equipment. Both trims come outfitted with driver and passenger advanced front airbags, front seat-mounted side airbags, side curtain airbags and front active headrests, four-wheel Antilock Brake System (ABS), Electronic Stability Control (ESC) Electronic Brake Distribution (EBD), Tire Pressure Monitoring System (TPMS) and a Brake Assist System (BAS), which recognizes an emergency stop and delivers significant braking power. Hill Start Assist Control (HAC) and Downhill Brake Control (DBC) also come standard on all models, the former assisting in preventing the vehicle from rolling backward when trying to pull away from an uphill gradient, while the latter locks the vehicle at a slow speed down steep grades so the driver can focus their attention on steering.

Kia Motors is in the midst of a dramatic, design-led transformation, which has been delivering dynamically styled vehicles in several important segments at exactly the right time, contributing to the brand”s continued gains in U.S. market share. With three new vehicle introductions and several other key initiatives planned for 2010, Kia is poised to continue its momentum and will continue to build the brand through design innovation, quality, value, safety features and with new technology such as the UVO powered by Microsoft® advanced hands-free in-car communication and entertainment system (expected to be available in select Kia models in the U.S. later this year). The launch of the all-new 2011 Sorento CUV, the official vehicle of the NBA and the first vehicle to be assembled5 at Kia”s first U.S.-based manufacturing facilities in West Point, Georgia, further enhances the lineup, and is now in dealerships.