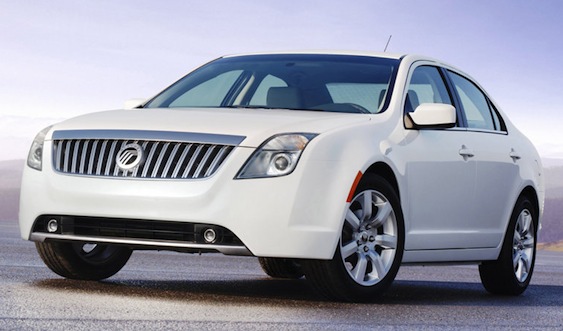 FoMoCo has officially confirmed that it will kill Mercury with production of the brand coming to an end in the fourth quarter of 2010. The Dearborn automaker said that it will allocate Mercury’s financial, product development, production and marketing, sales and service resources towards growing its Ford brand while enhancing its luxury Lincoln brand.

“Profitably growing Lincoln in North America is an important part of our One Ford plan,” said Alan Mulally, Ford president and CEO. “Our Ford brand is gaining momentum and winning customers around the world. Now, we are going to use the same laser focus to further strengthen Lincoln and deliver even more products luxury customers really want and value.”

Ford also confirmed that it will expand the Lincoln lineup with seven new or significantly refreshed models within the next four years. Lincoln will also get its first-ever C-segment vehicle.

As for Mercury owners, Ford will continue to offer access to parts and service support at Ford and Lincoln dealers. Current Mercury warranties and Extended Service Plans will be honored and Ford will offer some pretty big incentives on Mercury vehicles through the summer.

* Ford is expanding its Lincoln lineup with seven all-new or significantly refreshed vehicles in the next four years ““ including its first-ever C-segment vehicle
* Lincoln”s plan accelerates with more investment and attention on standout product design, class-leading technology and powertrains delivering top performance and fuel efficiency
* Lincoln product development, marketing, sales and service resources expanding as the brand competes with Cadillac and Lexus in the marketplace
* Ford will end production of Mercury vehicles in the fourth quarter of this year to fully devote its financial, product development, production and marketing, sales and service resources toward further growing its core Ford brand while enhancing Lincoln
* Existing Mercury owners to receive continued access to parts and service support at Ford
and Lincoln dealers; current Mercury vehicle warranties and Extended Service Plans will be honored; special offers available on new Mercury vehicles through the summer
* Affected dealers to receive specialized support during the transition, as the company continues its transformation to a more profitable dealer network

DEARBORN, Mich., June 2, 2010 ““ Ford Motor Company will expand and enhance its Lincoln brand lineup with seven all-new or significantly refreshed vehicles in the next four years as part of an aggressive growth plan focused on standout product design, class-leading technology and new powertrains ““ all aimed at competing with Cadillac and Lexus in North America.

Ford also will end production of Mercury vehicles in the fourth quarter of this year to fully devote its financial, product development, production and marketing, sales and service resources toward further growing its core Ford brand while enhancing the Lincoln brand.

“We have made tremendous progress on profitably growing the Ford brand during the past few years. Now, it is time to do the same for Lincoln,” said Mark Fields, Ford”s president of The Americas. “The new Lincoln vehicles will transform luxury for North American premium customers through an unexpected blend of responsive driving enjoyment and warm, inviting comfort. We will also offer our customers a world-class retail experience through a vibrant retail network.”

Lincoln”s hallmarks will be refined, modern design, the most fuel-efficient premium powertrains and industry-leading technology that create a unique driver experience both in the cabin and on the road.

The future of Lincoln is building from a strong base that includes the all-new flagship MKS large sedan, the all-new MKT seven-passenger crossover and a significantly refreshed MKZ mid-size sedan ““ all now in showrooms. The hybrid version of the MKZ will reach showrooms later this year and is expected to be the most fuel efficient premium sedan on the market.

This will be followed by another six all-new or significantly refreshed vehicles within four years developed with Lincoln”s DNA of standout design, precise and confident driving experience, class-leading technology and powertrains delivering top performance and fuel efficiency.

Lincoln will be led by expanded product development and marketing, sales and service teams to support the brand”s growth plan and ensure it has a strong cadence of distinct products that are well positioned in the market. Plans for Lincoln include:

Lincoln has started gaining traction with customers, as evidenced by market share gains during the past five years. Lincoln”s share of the retail U.S. luxury vehicle market has grown from 4.5 percent in 2005 to 6.3 percent through the first quarter of 2010.

In addition, Lincoln”s reputation with consumers has risen, with favorable opinion and purchase consideration reaching its highest level in the past five years. Lincoln”s long-term durability was second only to Porsche”s in the 2010 J.D. Power and Associates Vehicle Dependability Survey.

Mercury
Mercury originally was created as a premium offering to Ford and was an important source of incremental sales. However, the continued strength of the Ford brand ““ particularly during the past three years ““ has accelerated the migration from Mercury to Ford for many customers.

Today, Mercury”s customer profile, pricing and margins are almost identical to Ford, but Mercury”s incremental sales have been declining.

The majority of current Mercury sales are to fleet buyers and customers purchasing through employee, retiree and friends and family discounts, which Ford anticipates largely can be satisfied by Ford brand vehicles.

Of Ford Motor Company”s 16 percent market share in the U.S., Mercury accounts for 0.8 percentage points, a level that has been flat or declining for the past several years. That contrasts with the Ford brand, which has increased market share by 2.2 percentage points so far this year on the strength of new products and improved quality, fuel efficiency, safety, smart design and value.

Ford”s strengthening financial position ““ including the return to profitability and positive cash flow ““ allows the company to absorb short-term costs associated with the discontinuation of Mercury and to consolidate future product investments into Lincoln.

Today, there are no stand-alone Mercury dealerships in North America. Ford is working closely with dealers to maintain properly located stand-alone Lincoln or Ford-Lincoln dealers, which will offer dealers and the company the greatest opportunity for long-term profitable growth.

New operational standards developed with the company”s dealers will facilitate a Lincoln customer experience that exceeds the expectations of North American luxury customers.

Personal Attention
Ford will work closely with Mercury dealers and customers during the transition, including providing existing Mercury owners with continued access to parts and service support at Ford and Lincoln dealers and by honoring current warranties, including Ford”s Extended Service Plans.

“We are 100 percent committed to supporting Mercury owners through Ford and Lincoln dealerships and working hard to keep them as valued customers in the future,” Fields said. “At the same time, we will work closely with our dealers to phase out Mercury franchises and continue to build a healthy, growing Lincoln with strong new products and a profitable dealer network that delivers a world-class customer experience.”

Mercury owners will receive additional details in the coming days explaining the transition and assuring them that Ford and its dealers will continue to provide all necessary parts and service support for Mercury products.

Ford has notified Mercury dealers of the decision and provided details of a financial package that includes payment in exchange for resigning the franchise.

Ford today also informed dealers of special offers on new Mercury vehicles that will be available through the summer to support the sell down of current Mercury inventory and remaining Mercury vehicle production.

“We are taking decisive action and moving into the future with the right plan to deliver profitable growth for all stakeholders,” Fields said. “These moves position us to continue building momentum through strong brands, great products and an unwavering focus on the customer.”