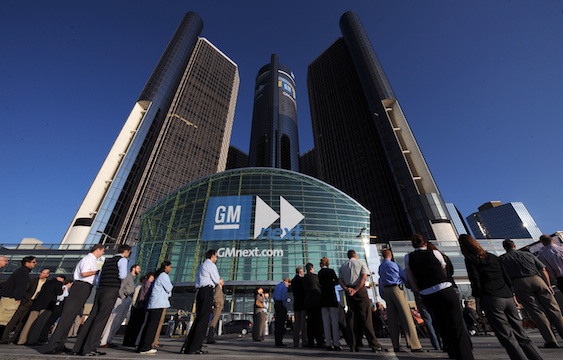 General Motors announced today that it has returned to profitability in the first quarter of 2010 with revenue of $31.5 billion and operating income of $1.2 billion. Net income attributable to common stockholders was $0.9 billion, resulting in earnings per share on a diluted basis of $1.66. The automaker made a total of $865 million during the first three months of the year.

The profit is its first since 2007 and the first since it emerged from bankruptcy last year. GM reported losses in the two previous quarters after coming out of bankruptcy.

“We”re pleased with our first quarter performance, in particular achieving profitability,” said Chris Liddell, vice chairman and chief financial officer. “In North America we are adding production to keep up with strong demand for new products in our four brands. We”re also steadily growing in emerging markets, keeping our costs under control, generating positive cash flow and maintaining a strong balance sheet. These are all important steps as we lay the foundation for a successful GM.”

A year ago, GM lost nearly $6 billion on revenue of only $22.4 billion, as sales plunged and the company hurdled toward bankruptcy.

DETROIT, Mich. ““ General Motors Company today announced its first quarter 2010 results, marked by revenue of $31.5 billion and operating income of $1.2 billion. Net income attributable to common stockholders was $0.9 billion, resulting in earnings per share on a diluted basis of $1.66.

GM”s first quarter adjusted earnings before interest and tax (EBIT) was $1.7 billion, after adjusting for the favorable impact of the sale of the Saab brand.

Cash flow from operating activities was $1.7 billion and after adjusting for capital expenditures of $0.7 billion, free cash flow was $1.0 billion. GM ended the first quarter with $35.7 billion in cash and marketable securities, including funds in escrow.