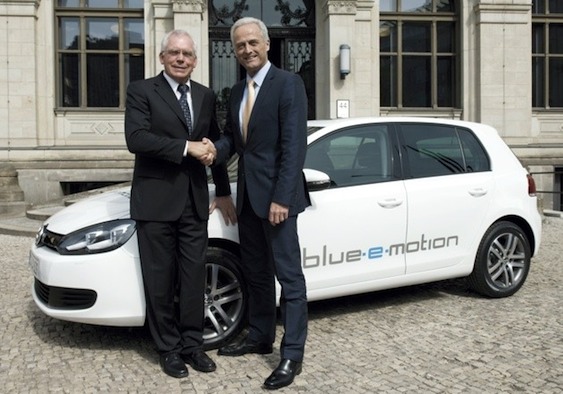 Volkswagen announced today that it will launch the Golf blue-e-motion and the technically closely-related Jetta blue-e-motion following the Up blue-e-motion (which will hit markets in 2013).

The German automaker said that it wants to use its bestselling models like the Golf to take electric vehicles out of their niche model status and to become the market leader for a new type of sustainable mobility by 2018. The strategy goes hand-in-hand with Germany’s goal to see one million electric vehicles on the roads by 2020.

The Golf blue-e-motion concept being presented to German Chancellor Angela Merkel is powered by an electric-motor (which gets its fuel from a lithium-ion battery) making 113-hp and 199 lb-ft. That allows the Golf blue-e-motion to travel 93 miles depending on driving styles and other factors such as air conditioning and the heating system. Volkswagen says that the range meets the needs of most German commuters.

Volkswagen also said that in 2012, a hybrid version of the Jetta will debut, followed by the Golf Hybrid in 2013 and Passat Hybrid.

Wolfsburg / Berlin, 03 May 2010 – Today, German Chancellor Dr. Angela Merkel will have a close look at a concept of the future Golf blue-e-motion in Berlin. Volkswagen is forging new links to the era of electric mobility with this pure electric drive version of the most successful European car ever produced. In 2013, after the debut of the Up blue-e-motion (a new city specialist), the Golf blue-e-motion and the technically closely-related Jetta blue-e-motion will launch on the market. In the same timeframe, the Lavida blue-e-motion will also launch in China. The stated objective: Volkswagen wants to use bestsellers such as the Golf to take electric vehicles out of their niche model status and to become the market leader for a new type of sustainable mobility by 2018. This strategy coincides with planning by the German federal government, which would like to see about one million electric vehicles on the streets by 2020.

Prof. Dr. Martin Winterkorn, Chairman of the Board of Management of Volkswagen AG: “Future electric cars give us enormous opportunities for reshaping mobility to be even more sustainable. When it comes to the environment, however, we must ensure that the energy used to operate these electric cars is produced from renewable sources. Since automotive manufacturers do not have any influence on the types of power plants that are built, the federal government must ensure that eco-friendly energy sources are utilised. Only then will we experience a genuine transition to a new era.”

In parallel with the electric vehicle offensive, Volkswagen is accelerating the introduction of new hybrid models as well. The new Touareg Hybrid is already on the market; in 2012 a hybrid version of the Jetta will debut, then in 2013 the Golf Hybrid and Passat Hybrid will launch. Just as methodically, Volkswagen will continue its development work on advanced and extremely efficient petrol, diesel and natural gas engines (TDI, TSI, EcoFuel), because it is an indisputable fact that a wide variety of drive technologies will coexist far into the future. “This makes it all the more important for the German federal government to proactively support the introduction of new technologies. With regard to electric mobility, the current temporary exemption of E-cars from taxes is inadequate,” says Prof. Dr. Winterkorn. The Volkswagen chief continues: “Starting in 2013 ““ the launch year for many new electric vehicles ““ the purchase of cars with zero-emissions drive systems should be promoted with a sustainability incentive. France, for example, has already pledged a cash incentive of several thousand Euros to buyers. We need to send such a signal in Germany as well. Moreover, and this is no less important, the German federal government must very quickly make provisions for broad coverage with a network of recharging stations across the republic, so that the infrastructure is available at the same time the electric car offensive is launched. Each new recharging station will also reinforce the public”s trust in the everyday utility of electric vehicles. Both of these components ““ state-funded incentives and infrastructure ““ are crucial and cannot endure any delay.”

The Golf blue-e-motion concept being presented to German Chancellor Angela Merkel will be powered by an electric motor integrated in the engine compartment in front, and its power of 85 kW / 115 PS drives the car silently. Like all electric motors, the motor used in the Golf also outputs a very high maximum torque (270 Newton-meter) right from a stop. The result: more fun in zero-emissions driving. The electricity for driving the electric motor is stored in a lithium-ion battery with a capacity of 26.5 kilowatt-hours.

A driving range of up to 150 kilometres can be realised in the Golf blue-e-motion; the specific range depends on driving style and factors such as use of the air conditioning and heating system. This range meets the needs of most German commuters: According to the German Federal Statistical Office, 6 of every 10 people in the workforce commute by car ““ on average 45.8 percent drive less than 10 kilometres (one-way commute), another 28.1 percent between 10 and 25 kilometres and 16.2 percent over 25 kilometres. The Golf blue-e-motion can also handle the driving ranges typically covered by many service providers. In short-distance driving, the zero-emissions Golf offers a sustainable solution to private users as well.

More noticeably than on today”s modern petrol or diesel engines, the maximum range of an electric car is severely reduced when its maximum power is demanded frequently. However, the Golf blue-e-motion – with its top speed of 140 km/h – provides ample power reserves so that less energy is consumed while driving, and it can even coast or “sail”. “Sailing” occurs whenever the driver ““ adopting an anticipatory style of driving – releases the gas pedal, or more apropos: the electric pedal. As in the drive system of the Touareg Hybrid, which is being produced today, the motor is then is disengaged from the drivetrain so that the car can coast with the least possible drag. The Golf blue-e-motion even recovers kinetically generated energy by battery regeneration in this mode of driving.

Adapted to the vehicle”s architecture, the concept car”s battery unit is located in the bootspace (useful remaining cargo capacity: 237 litres), under the rear bench seat and in the centre tunnel (between the front seats). A separate air cooling system ensures a constant thermal environment in the battery compartment.

As mentioned, all key primary and secondary drive components were integrated in the engine compartment at the front of the vehicle. In coming up with this design, developers applied experience they gained in numerous design studies. As in the E-Up concept car, an integral form of electric drive is used in the Golf blue-e-motion. Representing the core of the integral drive are the electric motor together with a transmission and differential. Energy management is handled by a high-voltage pulse-controlled inverter, which – along with the 12 Volt electrical system”s DC/DC converter and charging module – is integrated in the compact integral drive. The entire unit is relatively light and compact. The five-door and five-seat Golf blue-e-motion, for example, weighs just 205 kilograms more than a comparable Golf BlueMotion TDI with DSG ““ despite the fact that electric car batteries are known to be heavy and weigh 1,545 kilograms on the concept car.

Next year, Volkswagen will be testing the drivetrain and energy storage modules of the future Golf blue-e-motion with a fleet of 500 test cars – under all conceivable conditions. Essentially, the countdown to production launch of the future Golf blue-e-motion has already begun. The future is almost here, especially in Germany, because this is where one million electric vehicles will be on the roads starting in 2020 ““ this goal was resolved by the German federal government on August 2009 and is established in the “National Development Plan for Electric Mobility.” A long road lies ahead of us until 2020, especially since battery costs certainly need to be drastically reduced. However, another certainty is that a large number of the one million electric vehicles of the year 2020 will wear the VW badge.