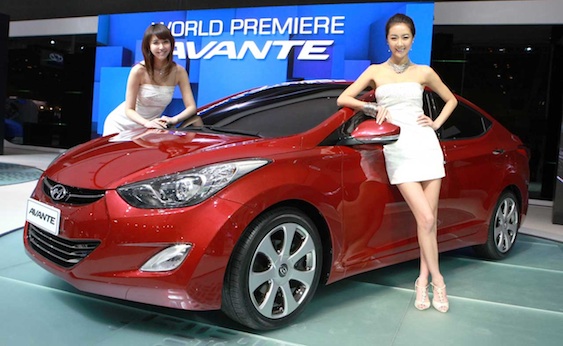 If there is one automaker that has been keeping busy in order to revamp its whole lineup, it has to be Hyundai. After the Genesis, Genesis Coupe, Sonata and the new Accent – Hyundai today unveiled the new Elantra at the 2010 Busan Motor Show in Korea.

Besides a sleek new look (courtesy of Audi’s ex head of design), the new 2011 Elantra will get Hyundai’s new 1.6L Gamma GDI engine that makes 160-hp and features fuel-saving technologies like Dual Continuously Variable Valve Timing and Variable Induction System. The engine will be mated to a new 6-speed automatic.

Our opinion? It seems Hyundai may finally have a winner to compete strong against the Honda Civic, Nissan Sentra, Ford Focus, Chevrolet Cruze and Toyota Corolla.

With sportier and even more elegant lines than its predecessor, the new Avante ? badged as Elantra in markets outside Korea – continues Hyundai’s “˜fluidic sculpture’ design philosophy.

Hyundai has applied its latest 1.6L Gamma Gasoline Direct Injection engine and a 6-speed automatic transmission to the front-wheel drive compact, the first time GDI and six-speed automatic have been featured on a compact sedan in Korea. The new Avante delivers a peak output of 140ps and maximum torque of 17.0kg·m. It is also about 10 percent more fuel efficient than its closest competitors, thanks to GDI, the six speed automatic and other fuel economy enhancements.

The new Avante will delight and surprise with a raft of other advanced features not found on other compacts, including HID (High Intensity Discharge) headlamps, LED combination lamps in the rear, heated rear seats, puddle lamps and a color TFT LCD information display nestled in the gauge cluster.

Under the Avante/Elantra badge, Hyundai has sold over 6 million units worldwide since the car’s launch in 1990. Hyundai will begin sales of the all-new Avante in the second half of 2010 in Korea.

At a separate commercial vehicle booth, Hyundai displayed a hydrogen fuel-cell electric bus and a Universe Limousine luxury coach, among other displays.

July 20, 2010 Omar Rana Comments Off on Interior shot of the 2011 Hyundai Elantra released