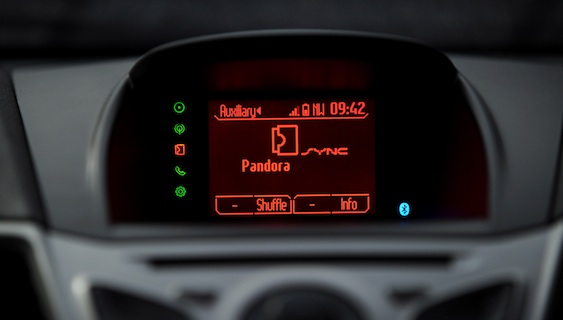 FoMoCo’s award winning SYNC technology is taking its practicality and convenience to the next level today with a new offering called SYNC AppLink, a new feature that allows drivers hands-free control of apps on their Android or BlackBerry smartphones via voice commands and vehicle controls (Apple iPhone fans, you’ll have to wait just a little bit longer… like you do for everything else).

“The growth in smartphone mobile apps has been explosive, and Ford has worked hard to respond at the speed of the consumer electronics market,” said Doug VanDagens, director of Ford”s Connected Services Organization. “SYNC is the only connectivity system available that can extend that functionality into the car. AppLink will allow drivers to control some of the most popular apps through SYNC”s voice commands and steering wheel buttons, helping drivers keep their hands on the wheel and eyes on the road.”

The first batch of SYNC AppLink apps approved will start popping up later this year and include Pandora internet radio, Stitcher “smart radio” and Orangatame’s OpenBeak app for Twitter (get ready for those “I’m stuck in traffic Tweets”). Other apps are on the way and updated versions of each app including SYNC support will be available thorough Android Market and BlackBerry App World for download.

Ford will first offer SYNC AppLink on the 2011 Fiesta, followed by other vehicles next year.

Hit the jump for the video of SYNC AppLink in action.

– Ford will first offer SYNC® AppLink, a downloadable software program, on the 2011 Fiesta, allowing owners to access and control AndroidTM and BlackBerry® smartphone apps with voice commands and vehicle controls
– Pandora internet radio, Stitcher “smart radio” and Orangatame”s OpenBeak are the first SYNC-enabled mobile applications
– Ford to create SYNC developer community with launch of new “Mobile Application Developer Network” (www.syncmyride.com/developer), giving developers a pathway to partner with Ford on SYNC-enabled applications
– Ford”s platform approach with SYNC is poised to harness smartphone app development and mobile web access; apps expected to be a $4 billion industry by 2012; analysts predict the mobile device to become the No. 1 source for Internet access by 2015

SAN FRANCISCO, April 20, 2010 ““ Customers have spoken — asking for safe, convenient access to their smartphone apps while in the vehicle ““ and Ford is responding by announcing the new SYNC AppLink software that will allow hands-free voice control of popular smartphone apps.

SYNC AppLink, a downloadable software upgrade, will be released for 2011 Ford Fiesta owners with the award-winning SYNC communications and infotainment system later this year, allowing drivers hands-free control of apps on their Android or BlackBerry smartphones via voice commands and vehicle controls. Ford will introduce AppLink on most SYNC-equipped vehicles next year, as well as provide interoperability with other smartphones.

The Android MarketTM and BlackBerry App World™ are among the leading growth markets for mobile apps. The new SYNC AppLink will seamlessly integrate apps using the vehicle”s voice and user interface controls, including buttons on the steering wheel, increasing eyes-on-the-road and hands-on-the-wheel time.

The first SYNC-enabled apps available later this year include Pandora internet radio, Stitcher “smart radio” and Orangatame”s OpenBeak app for Twitter, with additional apps on the way. Updated versions of each app, incorporating the SYNC application programming interface (API), will be available through Android Market and BlackBerry App World for customers to download.

Built-in, Beamed-in and Brought-in: The SYNC App Ecosystem
From its introduction, Ford has been building an ecosystem of available SYNC apps, continuously improving the consumer experience.

Studies show mobile app development ““ a niche market just three years ago ““ is expected to blossom into a $4 billion industry by 2012. Sites serving specific mobile operating systems, such as Android and BlackBerry OS, have experienced massive growth, with analysts predicting the mobile device will become the No. 1 source for Internet access by 2015, surpassing the home computer.

Ford and SYNC will answer the consumer demand by offering the only platform available for drivers to safely control their mobile devices and applications in the car. Leveraging SYNC”s safer voice commands and steering wheel controls, drivers are able to keep their hands on the wheel and eyes on the road. “Brought-in” apps residing on a consumer”s smartphone also eliminate the need for yet another piece of hardware to be installed in the car which only serves to add cost and complexity.

Customers will be able to download SYNC-enabled mobile apps through the same app store interfaces currently used. As SYNC-enabled versions of existing apps are released into the app stores, users will be prompted to download the latest version upon connection. Also, as developers grasp the notion that the vehicle interior has opened to them, a new dimension of apps designed from the outset to maximize the unique in-car environment will follow.

Opening the door to developers
To facilitate future SYNC-enabled app development, Ford has also activated a new developer network on its SYNCmyride Web site (www.syncmyride.com/developer). Interested developers can find a link to submit innovative ideas, and sign up for the latest information and news about the SYNC application programming interface (API) and software development kit (SDK). The package will allow developers to modify existing applications and create all-new apps that can successfully interface with SYNC.

“We”re very pleased by the rapid development time and positive feedback we”ve seen from our first partners,” said VanDagens. “We want to encourage all developers to visit our site and submit ideas, helping us tap into the global pool of innovation and creativity.”

June 8, 2010 Omar Rana Comments Off on Ford adds Google Maps to ‘Send to SYNC’ service at no extra cost

May 11, 2010 Omar Rana Comments Off on Ford kicks of production of 2011 Fiesta for North America