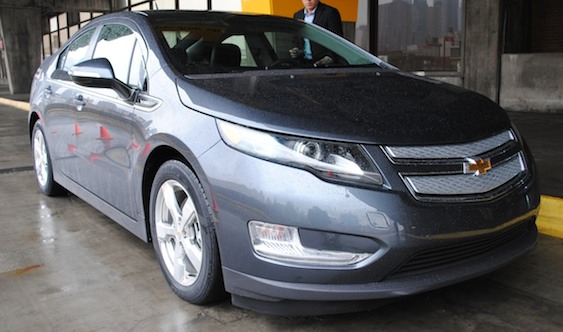 On January 7, 2007, at the Detroit Auto Show, General Motors issued a press release entitled “˜GM”s Concept Electric Vehicle – Could Nearly Eliminate Trips to the Gas Station,” marking the debut of the Chevrolet Volt Concept. Just over three years later, we had the opportunity to drive one of the very first Chevrolet Volt pre-production models before they hits the streets this November.

GM is insistent that the Chevrolet Volt not be called a hybrid, a plug-in hybrid, or even an electric vehicle. So then, what to refer to the Volt as? An electric-vehicle with extended-range capability without range anxiety. That is the very foundation upon which the Volt was first conceptualized and later developed. When it was first announced three years ago, GM”s charismatic executive Bob Lutz said that the Volt would be GM”s “˜benchmark in battery technology.”

“Even so, electric vehicles in general had limitations. They had limited range, limited room for passengers or luggage, couldn”t climb a hill or run the air conditioning without depleting the battery, and had no device to get you home when the battery”s charge ran low,” Lutz said. “The Chevrolet Volt is a new type of electric vehicle. It addresses the range problem and has room for passengers and their stuff. You can climb a hill or turn on the air conditioning and not worry about it.”

So how does it drive? We will get to that shortly, but first let’s get the technical stuff out of the way.

The backbone of the Chevrolet Volt is the Voltec propulsion system. That consists of a 16-kWh, “T”-shaped lithium-ion battery that powers the electric drive unit, which is capable of meeting full vehicle speed and acceleration performance while driving the car on electric power for up to 40 miles without using a drop of gasoline. According to GM”s preliminary specs, the system puts out 150-hp and a maximum torque of 273 lb-ft, bringing the Volt from 0-60 mph in about 9 seconds and hitting a top speed of 100 mph. The battery can be re-charged by plugging into a household outlet and takes less than 3 hours to recharge on 240 volts, and about 8 hours on a standard 120-volt outlet.

That does not mean that after 40 miles of driving your Volt will be rendered useless; enter extended range capability without range anxiety. The Volt carries a 1.4L 4-cylinder engine that allows the five-door, FWD sedan to travel additional miles until you”ve found an outlet to plug it in to. In range-extended form, the Chevrolet Volt will average 50 mpg, which is comparable to the Toyota Prius. A fully charged battery and full tank of gas will take the Volt over 300 miles.

So how does the car drive? Like a completely normal vehicle. This is not a sport car, nor does it provide the feel of a naturally aspirated engine, but compared to cars like the Toyota Prius and the Honda Insight, the Volt definitely has a much more solid feel to it. Even in electric-mode, the car takes off (with an added Sport Mode), takes corners as you would expect a car of this caliber to, and takes stop-and-go driving like a charm. What we”re trying to say is that while driving the Volt, you’ll feel completely normal and won”t experience anything totally unexpected; however, once you take your attention away from the street (and stop day dreaming about how you’re saving the world by driving a “green vehicle”) and look at the interior cabin, you’ll realize you’re driving something totally futuristic and innovative.

Inside, the Volt offers modern controls and attractive quality materials, two informational displays, and a touch-sensitive infotainment center with integrated shifter (which we thought was a bit bulky and odd) which all serve to distinguish the Volt from other vehicles on the market. It”s almost as if a designer from Apple Computers Inc. came to help GM out in designing the interior.

Our only real gripe with the interior was that the rear-seat area becomes very cramped with tall individuals occupying the front driver and passenger seats.

The outside of the Volt is akin to every other fuel-efficient vehicle on the market, an oddly shaped cheese wedge-like body. However, GM has focused all of their attention on the exterior towards maximizing efficiency. Every detail was carefully focused on to minimize aero-drag and maximize battery range as air flows easily around the car. The rounded flush front fascia with closed grille hits the eyes in an odd way, but this too serves a purpose; just like the aerodynamic side mirror, sharp rear edges, and rear spoiler – to make the car move effortlessly through the air as it attaches itself at the front and quickly detaches at the rear to reduce drag.

So, should you sit on the edge of your seat waiting to buy this car? Only if you want something technologically advanced and want to cash out in the mid $30k range and if you can recoup your investment. For example, if your daily commute consists of 40 miles a day, you”ll never have to pay for gas. The only cost you”ll have is maintaining your Volt and the electricity cost for charging the vehicle, which is estimated at $0.80 per day for a full charge delivering 40 miles.

Also, keep in mind that come November, General Motors will only offer the Chevrolet Volt in California, Washington D.C., and Michigan; GM will not be offering the Volt nationwide until 2011. 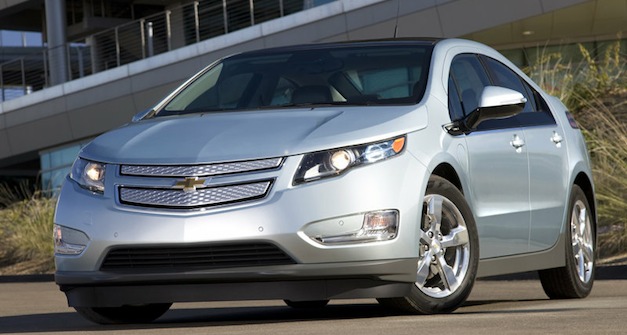 Report: Chevy Volt sales up so far in 2012, Nissan LEAF sales down